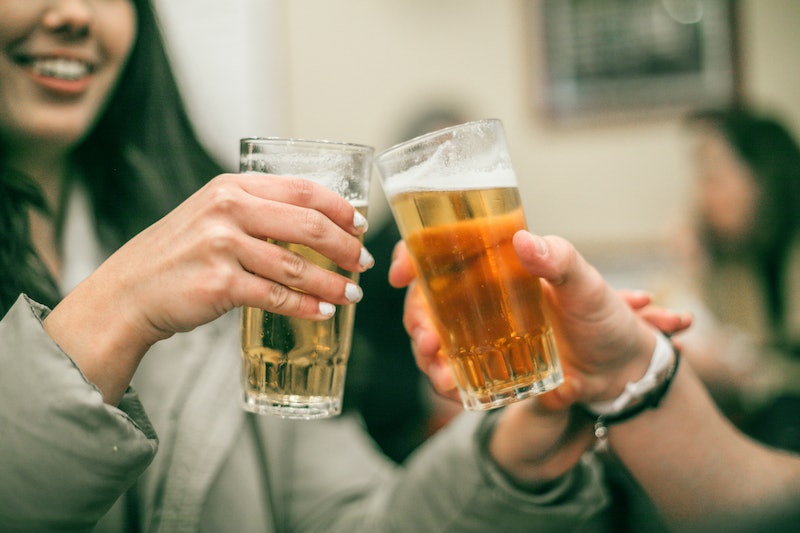 Grab yourself a brew: today's National Beer Day, the annual holiday when the nation cracks open a few cold ones and wonders how on earth it's going to survive to November 9th intact. (No, there isn't a tie between the positioning of election day and this celebration — but there really should be.) Beer is both a massive American industry (the overall beer market in the US in 2015 was estimated to be worth a whopping $105 billion, with craft beers making up $22.3 billion of that total) and one of mankind's most important drinks: evidence exists of its presence in ancient civilizations from Egypt to Mesopotamia. Earlier this year, researchers revealed a "recipe" for beer derived from a 5,000 year-old dig site in China. We've clearly enjoyed this yeast-fermented drink for a very long time, and that's consequently nabbed the attention of scientists.

A lot of the research surrounding beer has focused on its health benefits, or lack thereof. (Historians have entered the fray, too: the idea, long touted in historical documents, that humans drank beer and wine because the water of the time wasn't healthy is actually a myth. The Romans, for instance, were well-versed in the idea of boiling water to make it safe to drink.) And because of peoples' love of the beverage, it tends to grab headlines: the notion that beer is about as good in moderation for people's cardiovascular health as wine, for instance, attracted huge media attention in early 2016. For the record, we're still not entirely sure that's the case, but it remains pretty clear that over-imbibing beer (or any kind of alcohol) regularly is very bad for you. However, there have been other forays into beer science that have yielded, well, stranger results.

Beer Helps Us Recognize Happiness In Others

This recent study, released in September of this year, studied 60 people who had been given either alcoholic or non-alcoholic beer, and what they were able to recognize on the faces of others once their drink had "kicked in." The people in the study, crucially, weren't told whether their drink was alcoholic or not; and 30 minutes after their drink, they were given six images, all showing facial expressions of different kinds, from disgust and fear to happiness and surprise. What emotion, they were asked, did the faces demonstrate?

It turned out that the genuinely drunk people were more readily able to identify the emotions of "positive" faces (like the happy ones) than the people who'd been given non-alcoholic beverages. But drunk people weren't just happier; they were also much more inclined to spend time around others, and more likely to want to view "sexually explicit material" (more women than men, intriguingly enough). The scientists thought that this last aspect was likely due to the lowering of inhibitions in the drunk, and that the general emphasis on positive emotions and togetherness-time among the beer-drinkers was probably part of the pleasurable response to drinking in the brain: it makes us cheerier and more social. It remains to be seen, though, whether this is particular to beer in various ways or whether it differs according to alcohol types.

A study discussed in Scientific American in 2007 revealed something interesting: people who drink to forget might actually be accidentally doing the opposite — because consuming mild to moderate amounts of alcohol, including beer and other beverages, seems to enhance memory. The scientists running the experiment had found that there seemed to be a link between a receptor in the brain's hippocampus (called NR1), memory, and alcohol consumption; so they set out to prove it, with rats.

They fed two groups of rats — one normal group and one with the NR1 receptor artificially suppressed — a choice of three alcohol diets over 8 weeks: nothing, 2.5 percent ethanol (equivalent to low, under-the-legal-limit alcohol), and 5 percent (seriously drunk). They then gave them a bunch of cognition and memory tests. Interestingly, the under-the-limit rats performed better on all the tests than the teetotal ones, while the really drunk ones performed really well on emotional memory tests and flunked the others. This seems to indicate, at least in rats, that drinking heavily to block out memories will do precisely the opposite: it makes emotional memory imprint more heavily. Experiments with the NR1-suppressed rats indicated that it's part of an intricate chain of brain reactions that lead to better cognition in sweetly tipsy rats.

Beer hops have been part of the herbal medicinal cabinet for centuries; a herbal guide from 1830, for instance, recommends hops to cure everything from syphilis to rheumatism, with the charming note that "a pillow full of hops" might ease pain. But there may actually be real medicinal value in them; and in 2016, scientists revealed they were on their way to creating synthetic versions that could be used in actual medical tests.

The big issue is that isolating the useful bits of hops themselves can prove incredibly tricky in a lab format. The two things that need to be extracted from hops for testing, humulones and lupulones (which sound like Cinderella's wicked stepsisters but are in fact acids with potential health properties for everything from cancer to respiratory infections and dementia), are hard to extract, and you can't just throw hops at the problem and hope the result's good. The new synthetic options, though, would make life a lot easier when it came to testing the actual health effects of the hops-created acids. Whether anybody decides to create synthetic beer from this remains unclear, but we guarantee a craft beer producer somewhere in Portland is already pricking up their ears.

Alcohol-Free Beer Could Be Made To Smell Like Regular Beer

In one of the more unexpected uses of science recently, people who can't drink regular alcoholic beer but are disappointed by the quality of their non-alcoholic alternatives (and don't just want to grab a soda and be done with it) have been granted a boon. In 2014, the Spanish Institute for Science & Technology announced that they'd developed a technique to preserve the "aroma" of alcoholic beer, and transfer it to the often less-tasty alcohol-free varieties.

The scientists, it seems, managed to isolate the aromatics in beer that usually disappear when you take away the alcohol, by condensing the "gas" in normal beer into something that can be used as flavoring. The Journal of Food Engineering reported that 90 percent of a panel of experts preferred an "aromatic" low-alcohol beer to an untreated one, and 80 percent of them preferred aromatic versions of non-alcoholic beers.

There Is A "Gene" For Beer Foam

In 2012, certain motivated scientists set out to solve a conundrum: exactly what, in the genetic structure of beer's components, are the parts that create foam? Obviously this is a pressing question for the ages, so it's good that they solved it. It turns out that a particular yeast gene is responsible for creating the proteins that "stabilize" the structure of foam, which is made out of proteinous carbon dioxide gas bubbles.

This wasn't just a case of trivia for beer nerds, though. The gene, CFG1, is hopefully going to be used in the future to change the nature of beer's "frothiness" according to demand. The next step, apparently, is manipulating CFG1 in beer yeasts to "improve foam character" in beer. Genetically engineered beer foam: you are officially living in the future.