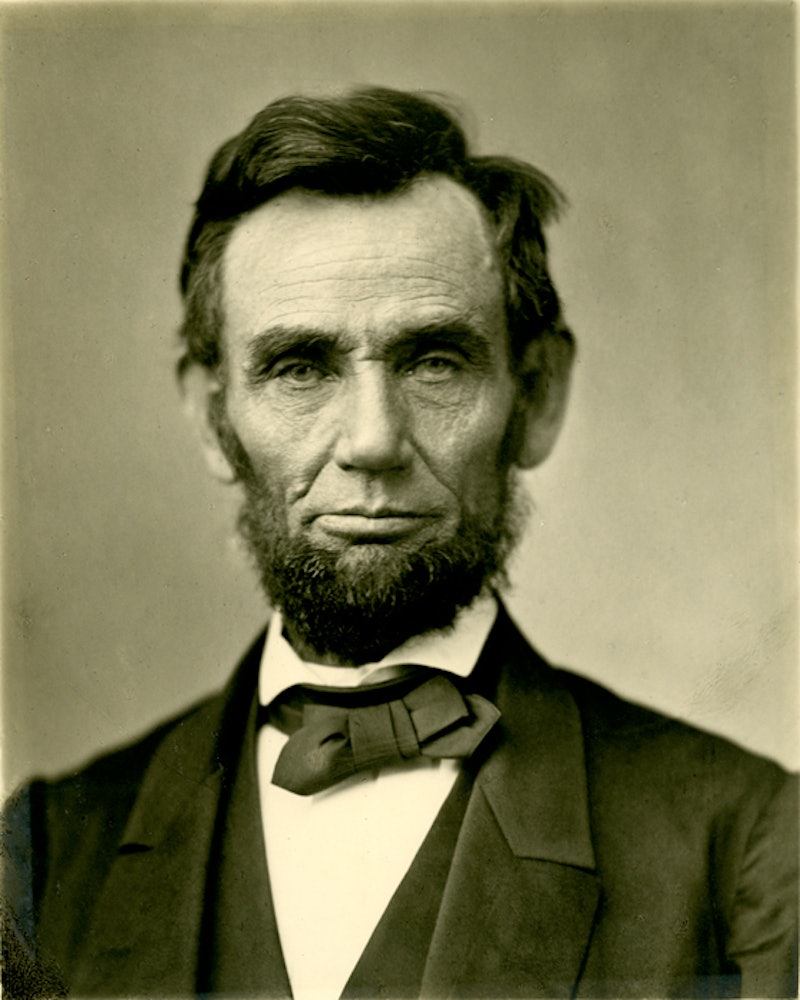 I'm sure your parents/ teachers/ cheesiest roommates have already made enough "This election is scarier than Halloween, right?" jokes to last you a lifetime, so I will spare you; however, this year's crossover between Halloween season and election season has left me genuinely thinking about the place where the spooky and the governmental intersect. Blame it on my habit of simultaneously watching American Horror Story while updating 538 on my phone — eventually, I started to wonder: are politicians too busy being super-rational to ever get involved with the supernatural? Or are they just as vulnerable to the occasional interaction with a thing that goes bump in the night as the rest of us?

As it turns out, politics and the paranormal cross paths fairly often — as a number of presidents have had encounters, near-encounters, or rumored encounters with ghosts, UFOs, and other unexplained things. Apparently, even having the weight of the free world on your shoulders won't convince the spirits of the dead to cut you some slack (is this why President Obama always looks so tired? One can only guess!)

The five incidents below — detailing times heads of state crossed paths with things that defy rational explanation — show that paranormal experiences are about as American as apple pie; or, well, maybe the ghost of an apple pie that only appears on your windowsill during the light of the full moon.

Andrew Johnson: May Have Pardoned A Vampire From Death Row

Johnson is considered by many historians to have been one of the worst presidents in history (a 2011 academic survey ranked him 36th out of 40 presidents). Some folks think this is due to modern thinkers holding Johnson to inappropriately modern standards, but others posit that Johnson was just, well, kind of crappy: elected as Lincoln's VP, he was unprepared to inherit the Oval Office after Lincoln died, which led him to a term that included an impeachment and a lot of questionable post-Civil War policy.

But hey, he may have pardoned a vampire, so he's got that going for him! Where did we get this provocative info from? From the journalistic historical record, of course! In 1892, the Brooklyn Eagle reported that in 1867, Johnson commuted a death sentence to life in prison for a man named James Brown, who "was charged with being a vampire and living on human blood."

Alas, like most great vampire stories, this one doesn't exactly hold up to historical scrutiny. According to a 2004 article by historian Robert Schneck, Brown was simply a sailor who got into an argument with coworker and stabbed the man; his death sentence was indeed commuted by Johnson, but no blood-sucking seems to have actually occurred (the killer shared a surname with another man who had been in the news for digging up a corpse, which may have created the connection in the reporter's mind). The real lesson here? Apparently, being a journalist used to be way more fun than it is now!

Truman's not alone in this — tons of people, from former First Lady Ladybird Johnson to former first daughter Jenna Bush, have reported encountering ghostly presences inside the White House. But Truman was the only president to leave a record of any sort confirming that he, personally, believed that he had encountered a ghost, and that 1600 Pennsylvania Avenue was lousy with the undead. As he wrote in a 1946 letter to his wife Bess:

"I slept well but hot, and some mosquitoes bit my hands and face. Night before last I went to bed at nine o'clock after shutting all my doors. At four o'clock I was awakened by three distinct knocks on my bedroom door. I jumped up and put on my bathrobe, opened the door, and no one there. Went out and looked up and down the hall, looked into your room and Margie's. Still no one. Went back to bed after locking the doors and there were footsteps in your room whose door I'd left open. Jumped and looked and no one there! The damned place is haunted sure as shootin'. Secret service said not even a watchman was up here at that hour."

Theodore Roosevelt: Wrote About A Fellow Hunter's Story Of A Bigfoot Attack

Roosevelt himself did not personally encounter a Bigfoot — I know, I'm sad, too. But he did believe another hunter's story about an experience with the human-esque maybe-ape — so much so that he gave the tale space in his 1893 book, The Wilderness Hunter. Roosevelt tells of a hunter named Bauman, who was out along the Salmon River between Idaho and Montana, when he and his hunting companion began to believe they were being stalked by a bear. Of course you, gentle reader, know better than to believe such foolishness — they were being stalked by a mysterious creature, known in our era for its lush body hair and, uh, intriguing scent: Bigfoot!

But this stalker was not the friendly, happy-go-lucky Bigfoot of modern myth who just wants to chill with suburban families and quietly enjoy our national parks system— Bauman and his partner believed that the creature ransacked their camp while they were away. Later, when the two men were separated, Bauman came back to find his hunting partner dead of a broken neck. Did he perhaps die in a tragic lichen-covered rock incident? Or any of millions of non-Bigfoot-related ways one could break one's neck in the woods? You fool. Roosevelt wrote:

"Bauman, utterly unnerved and believing that the creature with which he had to deal was something either half human or half devil, some great goblin-beast, abandoned everything but his rifle and struck off at speed down the pass . . . until beyond reach of pursuit."

Sure, at no point in his book does Roosevelt say, "Hello, I — the great Rough Rider — believe that cryptids walk the earth and also occasionally break our necks for no good reason," but he also never says, "Crazy, right? What do you think that guy Bauman's deal was? Did he lick too many toads out there, ya think?" Did Roosevelt think sasquatches were real, and, if so, did he aspire to shoot one and hang its stuffed body in a museum, as he did so many other animals? He did not address the question in his autobiography, which I think we can all agree is a loss for our country.

Abraham Lincoln: Had Prophetic Dreams Of His Own Death

Though the ghost of Lincoln has been supposedly spotted around the White House more than any other former president's spirit (Winston Churchill allegedly encountered Lincoln's wraith there while still nude after taking a bath), Lincoln himself wasn't a big believer in the afterlife — according to Doris Kearns Goodwin's biography Team of Rivals, Lincoln once told a neighbor who asked him if there was life after death, “I’m afraid there isn’t. It isn’t a pleasant thing to think that when we die, that is the last of us.”

However, Lincoln wasn't totally free from belief in eerie phenomena — he believed he foresaw his own death in a dream. According to the National Geographic Channel, Lincoln "dreamed that he had awakened to discover a wailing crowd in the East Room, one of whom told him that they were mourning the president’s murder. On the night before his death, he reportedly dreamed that he was in a mysterious boat or ship, 'sailing toward a dark and indefinite shore.'" Were these actually prophetic dreams? Or is this just what your standard issue office-anxiety dream looks like when you're the president of the United States? Let's hope Obama tells us the next time he's on Jimmy Kimmel Live!

No, fine, OK, UFOs are not supernatural. But they're freaky and they're a helluva lot more interesting than whatever budgetary meetings presidents usually have to spend all of their time dealing with, so we're keeping it in!

In 1969, Jimmy Carter —the man who would become our 39th president, but at the time was a former state senator working in the agriculture business — claimed he saw a UFO over Leary, Georgia, outside a Lion's Club meeting. Carter reported, decades later on Larry King Live, that the flying object was a "strange" "round light" that stopped overhead, above some trees, and began to change colors as Carter and over a dozen other people looked on. It then "disappeared into the west."

However, this wasn't a story he left behind when he re-started his political career; he later repeated the claim in 1973, after he had become the governor of Georgia, to the National Investigations Committee on Aerial Phenomena, a UFO organization. In fact, Carter was forthcoming about his experience throughout his 1976 presidential campaign.

However, Carter never went on record about believing that the thing he saw in the night sky was filled with little green men, grays, or the alien of your choice. Rather, as he notes in the Larry King Live clip above, while he felt that the object he spotted was "a genuine UFO in that it was an unidentified flying object," he "never thought and still don't think that it is possible for creatures from Mars to come visit us."

Carter was not the only president to be outspoken about his thoughts regarding unidentified flying objects — in 1966, then-congressional representative Gerald Ford proposed a congressional inquiry into a recent rash of UFO sightings in Michigan and elsewhere, dismissing the scientific explanation that UFO sightings are simply "swamp gas" as "flippant." According to some accounts, Ronald Reagan also claimed to have spotted UFOs in his lifetime; in a 2009 appearance on Charlie Rose, former president of the Soviet Union Mikhail Gorbachev noted that during a meeting during both men's presidencies, Reagan had asked Gorbachev if he would aid the United States if the country was attacked by aliens (for the record, the Soviet president said that he would).

More like this
Everything To Know About 'Evil' Season 4
By Meguire Hennes
The 8 Best Chew Bones For Puppies, According To A Vet
By Andrea Hannah
25 Things I've Reduced My Life To, In Addition To WFH In My PJs
By Ginny Hogan
The Spiritual Meaning Of The August 2022 New Moon
By Nina Kahn
Get Even More From Bustle — Sign Up For The Newsletter