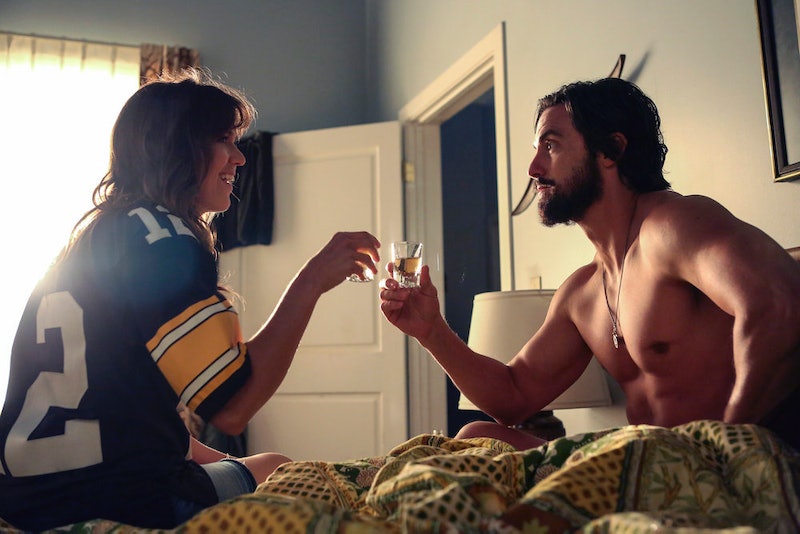 Spoilers for the Oct. 25 episode of This Is Us ahead. Jack’s presence on Earth has been debated since, oh, the pilot of This Is Us. Fortunately, instead of making viewers wait months to find out where he is in the current timeline, the Oct. 25 episode, "The Game Plan," gave a definitive answer about his fate. In the present, Jack is indeed dead on This Is Us . We don’t now exactly when or how he passed away, but we do know that his absence has clearly left a big hole in his family’s life. We also now know why the family loves football, as it was the surprising source of this big Jack reveal.

Suffice it to say that the Pittsburgh Steelers are the unexpected constant in the lives of Rebecca, Jack, and their kids. It all started when Jack wanted to watch football and Rebecca made him teach her the sport so she could enjoy it too. Soon, she became the ultimate Pittsburgh Steelers super fan. At this point, Rebecca was pretty anti-kids, and she said as much when she and Jack gathered at their local bar with Miguel (always that Miguel!) and his wife to watch the Steelers play in the Super Bowl. After an awkward conversation, Rebecca and Jack find they’re at an impasse about having kids (he wants them with her, she doesn’t want to be her mother, who never did anything for herself), and she storms out.

Later, as the Steelers take home the Vince Lombardi trophy, the two make up in the bathroom of the bar. In the present, we find out the triplets were conceived during that Super Bowl celebration. Hey, crazy things happen when your team wins the Super Bowl.

Simultaneously in the present day, Kate tells Toby that she watches the Steelers alone, and he, expecting football to be a social sport, wants to enjoy it with her. She is clearly uncomfortable but goes along with it anyway. Well, until she realizes that Toby really doesn’t get it, especially when he invites a friend over to watch with them and even pauses the game.

After she gets upset and leaves, Kate explains to Toby that needs to be home because she always watches football with her dad. After Toby says he'd like to meet her dad, she presents an urn adorned with Jack's old Steelers hat. Meanwhile, as Kevin explains how death works to Randall's daughters, he also confirms that Jack has died.

The Pittsburgh Steelers are literally responsible for Kate and Kevin coming into the world, and it’s interesting to see how Kate upholds this tradition of watching the game together, even after Jack's death. From what we see in this episode, Randall and Kevin don’t seem to care as much about football in the present, but Kate — who was always extremely close with her father, it seems — uses it as a way to still feel connected to their dad.

Kate also told Toby that she watched the Super Bowl with her dad in 2006 when the Steelers won, but she is not clear on whether that instance was with the corporeal, living Jack and she simply continued watching after he died, or if at that point he was already dead and she was watching it with his memory the way she does now. How long ago did Jack die, and from what? Neither is apparent on This Is Us, but viewers did get to see how his memory lives on through his children and the Steelers.

More like this
A TikToker Just Proved Gossip Girl's Identity Was Revealed In Episode 1
By Jake Viswanath and Meguire Hennes
Nicola Coughlan Shared A Lady Whistledown Excerpt From ‘Bridgerton’ Season 3
By Grace Wehniainen, Alyssa Lapid and Sam Ramsden
Everything To Know About 'The Last Of Us' TV Adaptation
By Sophie McEvoy and Radhika Menon
A New 'And Just Like That' Table Read Pic Confirms A Key Character's Return
By Jack Irvin and Grace Wehniainen
Get Even More From Bustle — Sign Up For The Newsletter