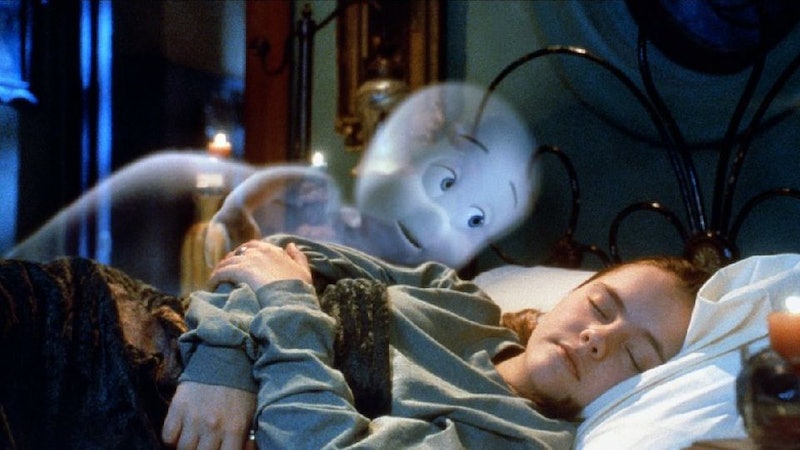 Even if you get seriously spooked by most specters, you probably have a soft spot for at least one friendly ghost. Though he’s been haunting pop culture for years, it wasn’t until the '90s live-action film Casper that the friendliest ghost you know got a real soul (and an actually buddy in Wednesday Addams herself, Christina Ricci). Yet no matter how many times you’ve re-watched Casper over the years, there are certain plot points you may have overlooked ... or at least have tried to bury.

Personally I’m not as emotionally attached to Casper as I am, say, The Nightmare Before Christmas, and maybe that’s why certain details are fuzzy. Not that he’d mind, since Casper spends a lot of the movie forgetting the first decade of his life, so I’m sure he totally forgives me for forgetting the first 10 minutes of his movie. Still, it all floods back whenever I pop that DVD in and start to realize just how sad and scary Casper is underneath that veneer of friendship and hijinks. Great family film, though.

So in case you want a refresher (or you want to ruin a nostalgic Halloween classic) scroll down for all the weird things in Casper you’ve probably forgotten about.

1. Kat’s Class Votes On Holding A Halloween Party At Her House, But Nobody Mentions What A Huge Imposition That Would Be

I feel like I always misremember this scene as Kat volunteering to upstage the evil popular chick, but no, some kid volunteers her haunted mansion as the place for the dance. And it's horrifying that the teacher allows this. Kat literally just moved. She probably has to catch up on about a month's worth of lessons. Let her live.

2. The Fact That This Isn't Kat's First Time Moving Around Because Her Father Is Seeking Out The Ghost Of His Wife

For some reason, everything before Kat and Casper meet is hazy to me, but the movie explains why she and Dr. Harvey are in town through a weird TV special. Also, the fact that journalists interview Kat when she's trying to go to her first day of school and describe her as Dr. Harvey's "loner daughter" is too much. This poor child.

3. The Setting Is Literally A Town Called Friendship, Maine

You got to love the subtlety there.

4. The Blink-&-You'll-Miss It Ghostbusters Cameo

Yet again, so subtle. Nice to know that Casper's three cartoony uncles can somehow spook out Ray Stantz.

5. Casper Is Actually Creepy In A Significantly Different Way Than Most Ghosts

Maybe that's something you wave off when you're an 8-year-old, but you know what? Having your ghost "friend" watch you while you sleep and whisper, "Can I keep you?" is significantly more disturbing than anything you can watch in The Conjuring.

6. The Way All The Ghosts Are As Corporeal As They Want To Be

It's like something they can turn on and off. Like, Casper can become all airy for the sake of emotional resonance, but he also has the ability to silence Kat with his ghostly non-body. So, there's something sketchy going on here.

7. All The Bizarro Super Powers Tied To Ghostliness

Just so everybody is clear, Casper can't manifest to the transparent image of a Real Boy (hellooooo, Devon Sawa) until the end. That's outside the realm of his capabilities. He can, however, turn into a bunch of balloons whenever the mood suits him.

8. The Way Ghostliness Ties To Amnesia, But Only Sometimes

It's really weird and selective: Casper not remembering his death is like a little subplot, Carrigan hasn't forgotten her lust for wealth and power, and Dr. Harvey can't even recognize his own daughter. Way to be consistent, movie.

9. The Sobering Fact That Casper Is A Child Who Died From An Actual Disease

The film takes a pretty chill approach to death when it's conducted on screen — Carrigan and Dr. Harvey's deaths are practically played for LOLZ — but when Casper has his weird "Rosebud" experience, things get a little too weird. He isn't just Casper the Friendly Ghost anymore; he's Casper the little boy who unceremoniously caught pneumonia and passed away, because that's what happened to children in the 1800s who wouldn't wear mittens. Dark.

10. The Implication That Casper Probably/Possibly Drove His Father To Insanity

The newspaper clippings state that Mr. McFadden claimed to be haunted by the ghost of his dead son, which the audience knows is true. Yet whether it was true or not, I'm sure it impacted his mental health, leading to his institutionalization. And so I say again: dark.

11. How Actually Dumb Is It That There's A Machine That Allows Someone To Cheat Death — SO DUMB

Everything about the extra-steampunky Lazarus machine is the dumbest thing I've ever heard and I hate it. Unless you're busting some ghosts, I really never want to see technology and the supernatural intersect like that. Be gone.

12. The Fact That Kat’s Mom Transforms Casper Into A Real Boy For Like, Not Even 5 Minutes

The deal is that he can pull a Pinocchio until 10 p.m., but with the nominal screen time that humanized Casper gets (he only can swing one dance). Like, what time is it? 9:53? What did that accomplish? I guess Casper got to be Kat's date to the dance in a roundabout way, but then he's instantly transformed into his cartoonish self. And based on the fact that he's still a ghost, I'm supposing that he will forever have unfinished business and be damned to walk the Earth until the end of time.