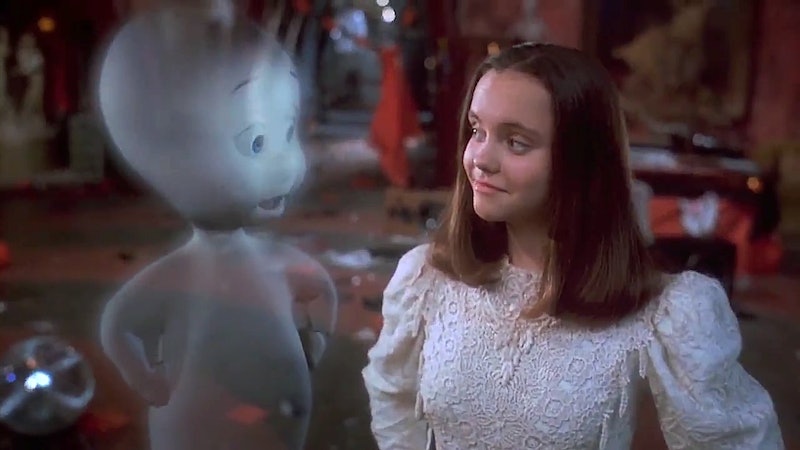 There is absolutely no shortage of incredible Halloween movies out there. Believe me, I have spent many a night combing through the classics — Hocus Pocus, Beetlejuice, The Addams Family — and allowed myself to become fully immersed in my Halloween childhood nostalgia. (Confession: sometimes it's not even during Halloween season.) And while I've always considered myself more of a vampire and witch fan than anything else, there's one particular ghost story that has always remained special to me, after all of these years — and that's the 1995 hit movie Casper the friendly ghost.

Sure, it doesn't exactly have a huge scare factor to it, but in a way that's kind of its appeal. After all, as many Halloween movie favorites have proven since the dawn of time (or, you know, the '80s and '90s), you don't necessarily need to be off-the-charts in the "boo" department in order to be considered a major success. And since Casper will be airing on ABCFamily's 13 Nights of Halloween schedule at 9 p.m. (ET) this Monday night, I thought now would be the perfect time to reflect on the many lovable attributes this show possesses as a way to help demonstrate why it's still — even to this day — the most watchable ghost movie of all time. For starters…

It Instills the Importance of Friendship

Just because someone's different, doesn't mean they don't deserve the chance to be accepted and loved. Everyone wants to find a connection with others, whether it be with the living or the dead in this case. Which is what makes this scene all the more moving. It's going to take a little more than some ectoplasm to tear this special friendship apart.

It Isn't Afraid to Tackle the Big Questions

Really makes you think, doesn't it?

If you were too young to appreciate the references back then, you'll certainly be able to now.

This line… this moment… this entire scene times infinity.

They may act tough on the outside, but in the end we're able to see right through them and that scary little facade of theirs — quite literally.

Proving that some things never change.

Did I Mention Devon Sawa Already?

Because, really, that's a good enough reason in and of itself. (*swoons*)