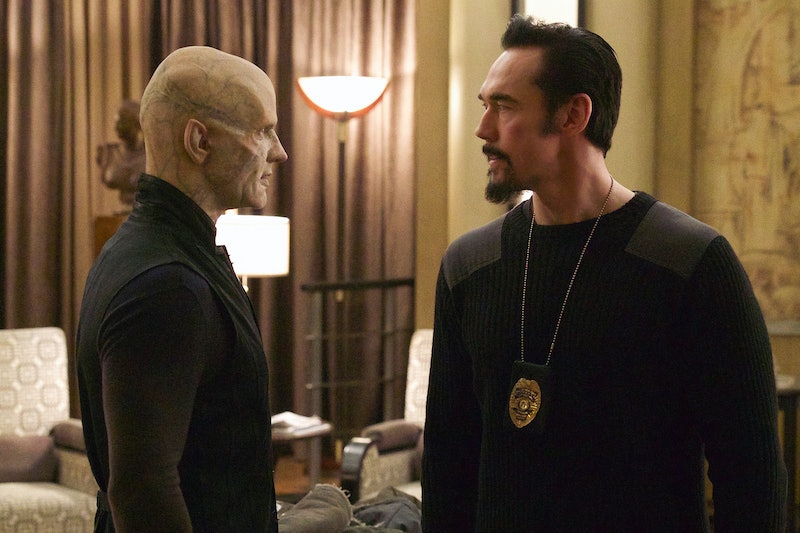 This season of The Strain has been all about the battle for New York among the humans and the strigoi. Now, as Season 3 comes to a close with its finale Sunday night, will this fight finally see a victor? Well, hopefully not, because that would probably mean the end of The Strain as a series. So will Season 3 be the last one for the show, or will The Strain return for Season 4?

Thankfully, Season 3 won't mark the end of The Strain, but that's not to say it's all good news here. In September, Deadline reported that FX has renewed The Strain for Season 4, but it will be the show's final season. So that means there will only be one more poster for the upcoming season of The Strain to give you nightmares. Cherish it always, friends.

There's really no reason for fans of The Strain to be upset about this news, though. That's because we're actually going to get to see more of the series than what was originally intended for the show's run on FX. “Our original plan was for the series to last three years. Once we began telling that story it expanded to be more. After finishing the writing on Season 3, Guillermo [del Toro], Chuck [Hogan] and I looked at our remaining story and felt the best version could be told in one more season," said Carlton Cuse, The Strain's co-creator and showrunner, in a statement, as reported by Variety . "We have a fantastic plan for an exciting and climatic Season 4. We are deeply grateful to FX for supporting our vision and for allowing us to end the show on our own timetable.”

Cuse and the rest of The Strain's creative team have quite some time before the final season of the show airs to make sure it's the best one yet. In the announcement about the show's ending, FX also revealed that Season 4 of The Strain will premiere sometime in summer 2017. Since the grand finale of The Strain is kind of far away, there aren't a ton of details available yet about what the creative team is cooking up to end this series, unfortunately.

But whatever does end up happening in Season 4, I don't doubt that it will be exactly what's right for the show and will make fans happy, since The Strain's creative team has been extremely thoughtful up to this point. For example, according to The Hollywood Reporter, the team worked hard to figure out if the show needed a Season 4 or even a Season 5 to tell the rest of the story and thought about whether the usual 13 or a shorter 10-episode Season 3 made the most sense. As Cuse described in advance of the series' current installment to reporters during the Television Critics Association summer press tour in August, Season 3 of The Strain ended up having 10 episodes.

But mostly, everyone involved with The Strain is keeping pretty mum when it comes to Season 4. We'll just have to wait and see what info may leak as we get closer to the premiere in Summer 2017. However, you can probably be sure that the end of the series will be one you won't soon forget, no matter how many times you rub your eyes.

More like this
Alan Carr's 'Changing Ends' Is A Witty Sitcom Based On His Own Life
By Darshita Goyal
Everything To Know About The 'Daisy Jones & The Six' TV Series
By Maxine Harrison and Brad Witter
'The Last Of Us' Has Officially Been Renewed For Season 2
By Darshita Goyal
Here’s What Happens To Bill & Frank In 'The Last Of Us' Video Game
By Brad Witter
Get Even More From Bustle — Sign Up For The Newsletter
From hair trends to relationship advice, our daily newsletter has everything you need to sound like a person who’s on TikTok, even if you aren’t.