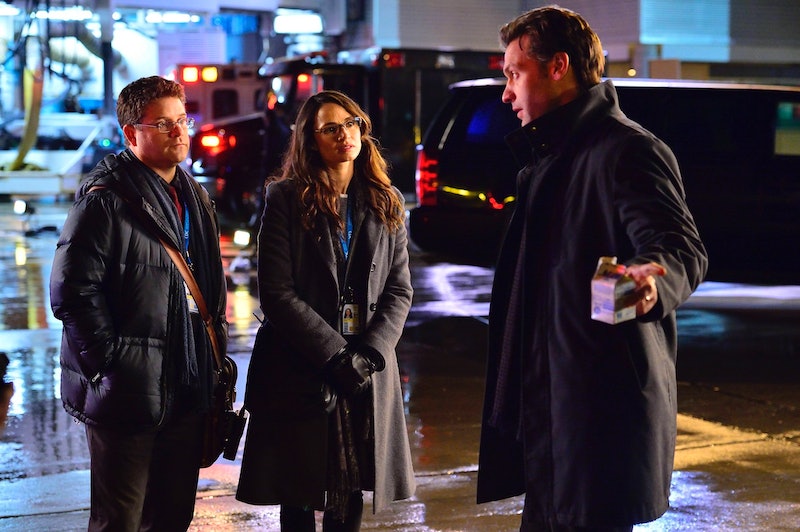 The Strain had a very unique journey to the small screen. It was originally conceived in the brilliantly creative mind of Mexican filmmaker Guillermo Del Toro as a television show, but when no network expressed interest in picking it up, he decided to turn it into a series of novels instead. He co-authored the three books with Chuck Hogan: The Strain (2009), The Fall (2010), and The Night Eternal (2011). The material was then adapted into comic book form by Dark Horse with a planned 24-issue series. And then — finally — the project ended up where it was first envisioned, when FX approached Del Toro about adapting The Strain novels to the small screen.

The filmmaker partnered up with Carlton Cuse to co-run the adaptation, who was hot off of six years on ABC’s popular sci-fi mystery Lost . The geek god and the fantasy freak seemed like the perfect partners to bring the wild world of The Strain to television audiences. And to hear them talk about their process together, it seems like it really was a match made in heaven. (Or hell, if you will.)

We got the chance to chat with Del Toro and Cuse, as the two waxed nostalgic about their process, detailed their hopes for the future of their show, and expressed their excitement to scare all of our pants off.

Cuse knows Strain co-author Hogan personally, and he read the novel when it was first published as a die-hard Del Toro fan. When FX approached him about running the series, he didn’t have a hard time saying yes:

I basically decided to get involved for two reasons. One, I have a lot of respect for Guillermo as a filmmaker and I thought — particularly in a monster show like this — he’s one of the most imaginative guys out there. And I also thought it was this fantastic opportunity to upend the vampire genre. The genre’s sort of been overrun by romance, and we’d had our fill of vampires we were feeling sorry for because they had romantic problems. It was time to go back to the conception of vampires as really scary, dangerous creatures.

When asked why he, along with the rest of the television audience these days, seems to delight in blood and violence, Del Toro appealed to our animal nature:

We are mammalian creatures. We are territorial, we are built to fight and fend off challenges. And yet we live in a society that, the more it isolates itself from its natural instincts, the more it seeks them in entertainment. And I think there is a vicarious thrill where your brain needs — the way your body needs exercise — it needs to be exposed to flight and fight instincts. And you seek it through a roller coaster, or some people seek it through extreme sports, or you can seek it in genres like noir, crime, horror, adventure, etc.

And was there any point during The Strain where FX said “too much” to the gore? Not according to Del Toro:

It’s almost like a hostage situation, where you need to show an audience that you’re not kidding. You have to show you are going to deliver, either by atmospheric, creepy moments or by visceral punch. Hopefully both. The things that will make you feel queasy, will make you feel unsafe, will bring this sort of delightful shiver that is required with the genre.

In recent years, social media has emerged as a powerful force in television. It can cause ratings to soar thanks to the phenomenon of live-tweeting (just look at ABC’s Scandal ). But it can also lead to your downfall if the vicious denizens of the web turn against you. Cuse has plenty of experience with social media on both sides of that coin, thanks to his time on Lost. That was a highly successful show throughout its run, although what most people probably remember is how furious some fans were about the finale, despite it being relatively well-received at the time. Unfortunately, a very vocal minority on social media has the ability to shape public opinion and effectively rewrite history. So is Cuse nervous at all about interacting with the internet this time around? Actually, he seems surprisingly optimistic:

Guillermo and I are very hopeful that fans are going to embrace the show, and we will be looking out there to see how people react. It’s also instructive as we hopefully go forward with the second season of the show to see what people like and don’t like. I’m enormously curious to see how people react to all sorts of things. We’ve been working on this project for almost two years, so the idea that we’re now going to see what people think of it and get their honest, true, and complete feedback is actually very exciting to me.

Del Toro comes from a very different background than Cuse. His only experience directing for television has been five episodes of the Mexican horror anthology series La Hora Marcada back in the 1980s. So how did the filmmaker handle the transition from the big screen to the small? With lots and lots of preparation, of course:

I asked FX to give us a long preproduction period so I could really plan out the makeup effects, the creature effects, the visual effects, all of which I have big experience with, in order to try to bring a big scope and feel to the series. We’re doing sophisticated effects and some big set pieces while staying on a fiscally responsible budget, and that pre-planning was crucial.

Those who have read the source material probably want to know: how closely will the show line up with the novels? Cuse says he and Del Toro have a very clear-cut plan for the series:

Book One is Season One. The plan is that the show will run between three and five seasons. As we work out the mythology and storyline for season two, we’ll have a better idea of exactly how long our journey is going to be, but it won’t be more than five seasons.

And what does Cuse think of this increasingly popular close-ended way of doing business?

We’re moving into this new phase of television where audiences are really embracing stories with a beginning, middle, and end. If you look at the success this season of True Detective and Fargo, as well as the incredible response the end of Breaking Bad got, you have to recognize that the audience wants to see stories that come to a conclusion. They want the full and rounded experience. Television has been a first act and sort of an endless second act, and I think that the best television now is giving you a three-act experience. And that’s what we want to do with our show.

Lost is a show that many people (the most diehard fans included) felt suffered from a prolonged middle act. Once Cuse and co-showrunner Damon Lindelof (who now helms HBO’s The Leftovers ) were able to negotiate an end date with ABC, the creative spark reignited and sent the show spinning towards a thrilling conclusion. It sounds like Cuse is excited to have that opportunity from the outset this time.

As prolific as anthologies and close-ended series have become, this somehow still isn’t a lesson everyone has learned. Just look at CBS’ Under The Dome, originally conceived as a limited-run event, only to have the network renew it for a second season due to high ratings. That show is now an unmitigated disaster that bears almost no resemblance to its Stephen King source material, and whose only viewers are professional recappers or ironic hate-watchers. It’s a relief to hear that Cuse and Del Toro have embraced this new format and are planning to terrify us for five years… and then leave us with nothing but our nightmares and a renewed fear of the dark.