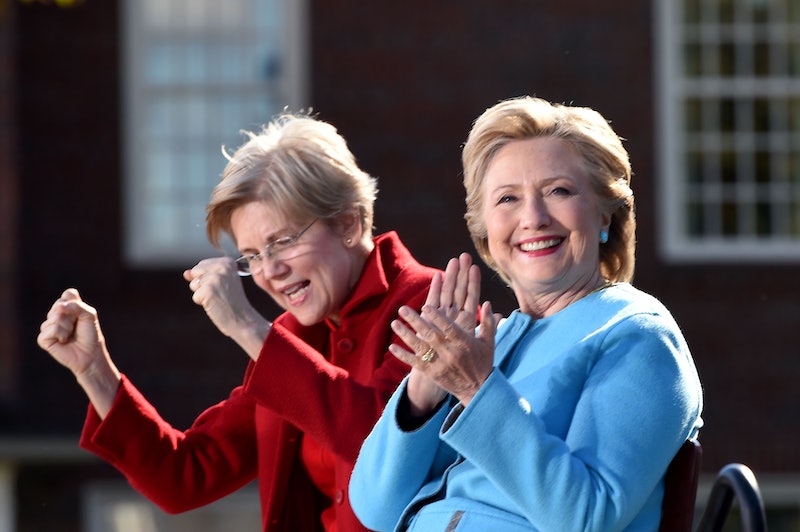 This election has been a bit of a conundrum for women. On the one hand, it has given us our best and closest chance at the first female president, but it has also produced extreme vitriol against women not seen in any previous presidential election. Thanks to Donald Trump (as well as many of the Republican candidates that came before him), female voters have been dealt an onslaught of attacks against their bodies and mental well-being. But thankfully, those attacks have inspired women to support other women throughout the election, creating camaraderie both online and in person.

The times Trump has unintentionally created a rallying cry for women are innumerable. But one thing is clear: Women have fought back, engaging in online activism and campaigning to ensure that the Republican nominee has no place in the White House. Despite Trump's attempts to convince his base that "No one has more respect for women" than him, no one — not even the party that once lined up to support him — seems to be buying it now.

Yet women are still forced to fight back against the nominee's rhetoric time and time again. Here is a look at seven instances in which the Nasty Women hit back by sticking together.

Millions of tweets poured in after writer Kelly Oxford encouraged women to write about their first time being sexually assaulted. The responses proved to be a cathartic pushback against Trump, after a recording emerged of him saying that he likes to "grab [women] by the pussy" in a 2005 Access Hollywood appearance.

Women used this hashtag to create a sense of camaraderie with one another online. Whether they were tweeting about getting out the vote or supporting women in general, this hashtag was used to let women know that they weren't alone.

Hundreds of women gathered outside of Chicago's Trump Tower to protest the Republican candidate and his heinous bragging about sexual assault. Alicia Swiz, the organizer of the "Pussy Grabs Back" rally, said of the event: "It's so exciting to see these women and everyone's having fun. We're mad, but we're excited to be here and empowered supporting each other."

4. Kasich Asks Women To "Come Out Of The Kitchen"

Democratic women have certainly not been the only ones to take a stand against the overwhelmingly demeaning tone this election has taken against women. At a rally for John Kasich, the Ohio governor said that women once "left their kitchens" to support one of his campaigns. One Republican woman at the rally reminded him that women need not "leave their kitchens" to vote for him. When addressing the candidate, she said: "First off, I want to say, your comment earlier about the women came out the kitchen to support you? I'll come to support you, but I won't be coming out of the kitchen."

Throughout the primary season, the Republican candidates were fond of repeatedly attacking Planned Parenthood. Their main fodder were the Planned Parenthood videos, which were later found to be deceptively edited by anti-abortion activists. But women weren't having this one, either. According to The Huffington Post, donations for Planned Parenthood went up as Republicans continued their attacks against the organization.

Many women went on the defensive when Trump attacked Fox News host Megyn Kelly. Though many did not identify themselves as conservative, the need to stand with her after the nominee's months-long tirade trumped their political affiliation.

Perhaps there has been no greater sign of women coming together than when Trump called Hillary Clinton "such a nasty woman" at the final presidential debate. Since becoming the feminist rallying cry this election needed, female voters have turned out in droves to declare themselves "nasty women." The phrase has allowed legions of women to stand in solidarity with fellow nasty women, like Clinton and Senator Elizabeth Warren.

Women have consistently proven throughout the campaign that they won't take the GOP's punches lying down, and come Nov. 8, we'll get to see all of the nasty women in action.