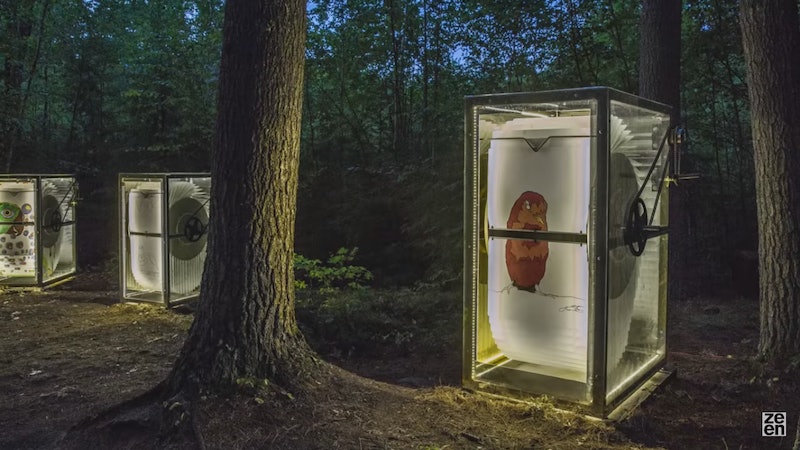 One talent group of 89 teen and preteen summer campers has done something incredible. They've installed giant flip books in the New Hampshire forests around Beam Camp, near Strafford, with some help from London architecture firm Mobile Studio. Known as "Universal Play Machines," the flip books may be operated by anyone who can turn their cranks.

This sort of thing might be ~magical~ for us, but making creative machines is standard practice at Beam Camp. Since 2004, the camp has guided kids through the creative problem-solving process by having them collaborate and build great things. "Each session campers and staff build a spectacular large-scale collaborative project chosen through an annual worldwide design competition," according to Beam's website. Previous projects include musical playground swings and a 30-foot-tall kaleidoscope.

Each of the giant flip books is filled with 50 illustrations, which clack down when the crank is turned. The split-flap design is similar to the iconic — and now tragically rare — Solari boards that announced arrivals and departures in Amtrak stations across the country.

Mobile Studio Director Chee-Kit Lai says the the giant flip books in the New Hampshire woods "are the world’s largest mechanical flipbooks [sic] ever made."

The camper-engineers at Beam didn't keep the secrets behind the flip books' design to themselves. They fit each structure with one-way mirrors, and lined the insides with LED strips. During the day, the mirrored panels reflect the surrounding forests, but at night, the LEDs are turned on, and passers-by can see the inner-workings of the giant flip books. It's a modern form of magic that's purely entertaining, whether you're more interested in the art or the engineering.

Check out a video of the giant flip books above, and let me know what you think of the Beam Camp project on Twitter!