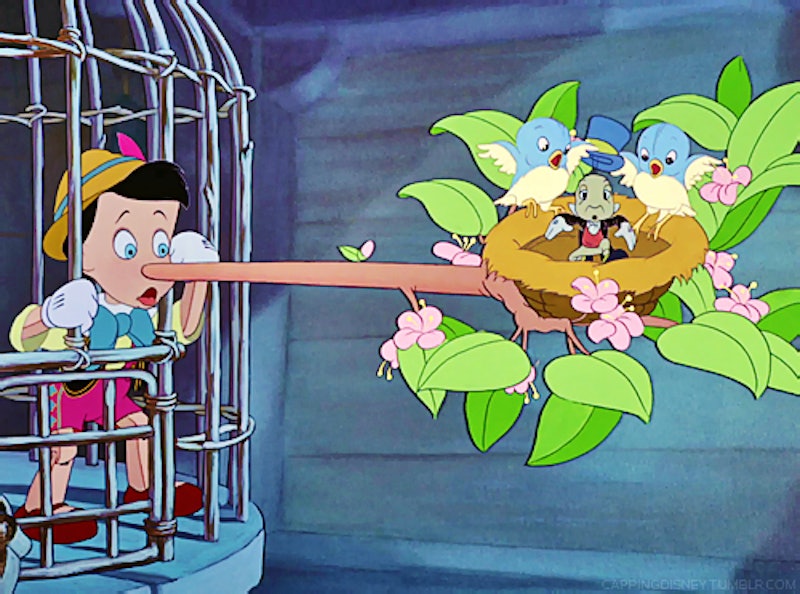 It's something some of us can relate to: You're talking to a friend and let a small fib slip ("Yeah, I've played a little tennis..."), and it somehow escalates to a giant lie ("I totes used to train with John McEnroe!"). Why do our lies escalate? New research from scientists at University College London and Duke University may have found the answer.

The results, published in Nature Neuroscience, reflect a study involving 80 participants who played a game with a partner (really a researcher). Some participants were hooked up to an MRI scanner. They were told that they had to report the number of pennies in a jar to their partner, who would pass the number on to the researchers. Both people would be given money for it. Some participants were told that the more accurate and truthful their guess was, the more money they'd get. Others were told that if their partner got the wrong number, they'd get more money — meaning they had an incentive to lie about the number of pennies in the jar.

The findings were quite telling: First, the researchers found that as the game went on, participants were more willing to lie. They would increase or decrease their estimate by a few pennies, then a few more, then a few more. Secondly, lying increased only for the two scenarios that benefitted the participant, regardless of what happened to their partners.

The brain scans were even more revealing, as they were able to observe participants as they became more comfortable with lying. During the first lie, their brains showed activity in the amygdala, which is connected to strong emotional responses. But with each lie, that activity declined. In other words, their brains started to recognize and become comfortable with the act of lying. It gradually lost its negative association, and the body didn't react as much.

While the results can't be considered conclusive or definitive, at the very least, this gives us a glimpse into the reason why lying becomes easier the more we do it. It's as if we're gradually breaking the ice, becoming more accepting of fooling people. But make no mistake about it: Lying still holds negative consequences, aside from the risk of getting caught. Fudging the truth can cause your body stress and anxiety.

That's why lie detector tests are able to tell when you're lying: Your body exhibits stress, like an increase in heart rate and blood pressure — however slight it may be.

While there are times when a little white lie might not be hurtful (or perhaps, it's even helpful), these results seem to confirm that it's not something we want to make a habit of.