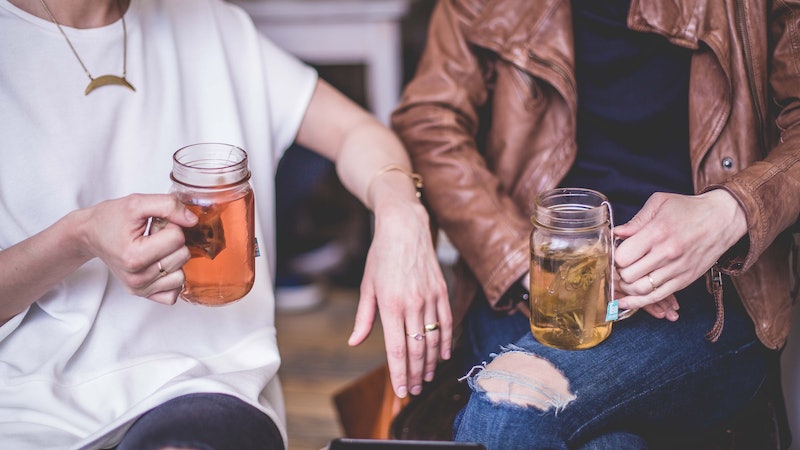 If there's one thing that will send your coupledom down in flames, it's lies and dishonesty. It doesn't matter if you're telling little white lies, or grandiose ones — your relationship needs to be truthful in order to work. After all, honesty really is what all the other good stuff is built on.

If you don't believe me (or have convinced yourself otherwise), then think back to a time when you fabricated the truth. Even if you were just lying about something small, the whole thing likely spiraled out of control. Pretty soon you were sneaking around, building on the lies, and having to remember everything you said. You were tired, your SO could totally tell, and things probably got weird.

So why do we do it? Why do we make our lives more difficult, instead of just spilling the proverbial beans? As Nicole Martinez, Psy.D., LCPC, tells me over email, "Couples tend to be dishonest with each other for the same reasons that we are dishonest with anyone. We want to avoid conflict, punishment, or perceived unhappiness."

It makes sense. And yet, attempting to avoid any potential pain only makes things worse. It's much better to face the truth head on, and deal with it as a couple. Below are some ways to do just that, so you both can have a healthier, and more truthful, relationship.

1. Be Ready To Hear The Truth

The scariest part about being more honest and truthful is just that — actually knowing the truth. If dishonesty has been afoot for a while, this might mean facing something you've been more than willing to brush under the rug. But try not to be afraid of what you'll find out. "Good or bad, it is the truth," Martinez says. If it doesn't tear you apart, it will only bring you closer — and that's kind of the point.

2. Chat About Things As They Happen

Important conversations shouldn’t be put off, according to Scott Stabile on MindBodyGreen.com. So make a habit of discussing issues as they crop up. He suggested setting aside some time to chat that works for both of you, and then sticking to it. Whether it's a simple misunderstanding, or a huge problem, talking about it while it's fresh will prevent things from spiraling out of control.

3. Be As Patient As Possible

Sometimes being honest is super difficult, and you might find your SO is struggling for the right words. If that's the case, calmly hear them out. "Nobody communicates perfectly. It’s important to be patient with your partner as they work to express themselves," Stabile said. "Listen to what they’re saying, with openness and patience." It'll make it easier for both of you.

4. Be Honest With Your Reactions

If your partner is pouring his or her heart out, you might be tempted to stare back with a straight face, despite feeling angry, or upset, or hurt. That may be the polite thing to do, but it isn't exactly helpful. If something they say is really rubbing you the wrong way, it's much better to say so. (All in the name of honesty, right?)

5. Try To Read Their Body Language

"There are more than words at play when you talk with your partner," said Stabile. And this can obviously be used for good. After all, you're likely an expert on your partner's body language. Knowing when they look sad, despite what they're saying, can help move an honest conversation forward.

6. But Don't Be A Mindreader

Body language can be helpful, sure. But don't rely on it solely, or fancy yourself a mindreader, as doing so can lead to misunderstandings. As Martinez says, "Don't assume what the other person is thinking, ask them." Simple as that.

7. Resist Getting All Judge-y

If you want to be more open with each other, you'll both have to put away the judgement. "When we feel judged, we either get defensive or shut down, neither of which encourages open dialogue," Stabile said. Being chill and open to what each other has to say will let the honesty flow forth.

8. Allow Each Other A Time Out

Honest conversations are tiring AF. So tiring, in fact, that I bet it's another reason why we all avoid them. The best thing to do, if you feel yourself getting burnt out, is to take a break. "If you're trying to be honest with each other, make sure you allow one another to 'drop out' at some point for a cooling off period or some down time," noted an article on YourTango.com. And only return to the convo once you both feel ready.

9. Admit Your Own Mistakes

It can be tempting to want to "win" the conversation, or to come out as the person who is perfect and right. But creating a space for truthful dialogue often means admitting your own mistakes. If you can do this, your partner will be more likely to do it, too.

10. Turn To Each Other With Your Problems

It's totally OK to confide in your friends and family, but don't make them your only source of comfort. Keeping your partner in the loop will help you trust each other, and will create a type of relationship where you both feel comfortable sharing. "If you’re open and self-revealing, your partner is more likely to be more open with you," Joel Block, Ph.D., a certified couples therapist told Women's Health.

11. Be Open About Your Flaws

Whether it's admitting to an anger problem, or coming clean about your total and complete inability to cook — revealing your flaws is a necessary step in having more honesty. Being open about such shortcoming will make you both feel comfortable about revealing bigger things, according Narins.

As the trust and honesty builds, you'll quickly become that awesome couple who can share anything, and be entirely honest with each other. And what could be better than that?