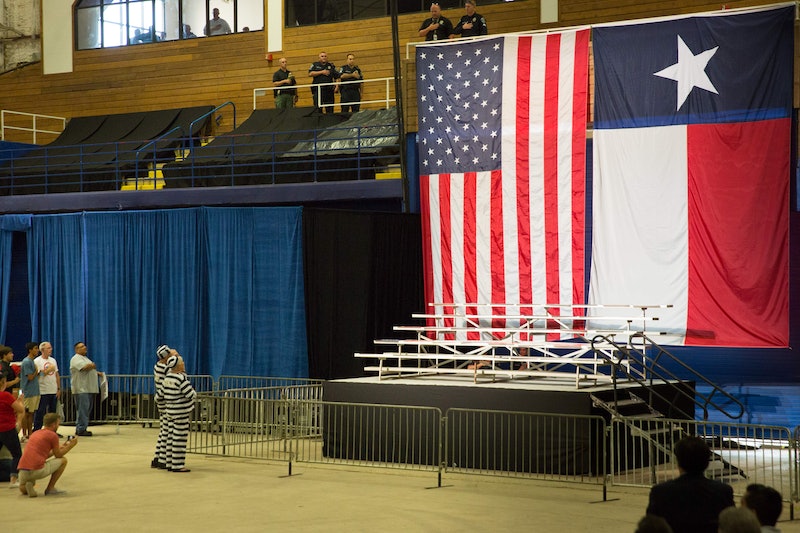 Throughout October, Hillary Clinton took the lead in most swing states amid Donald Trump's debate disasters and the release of a 2005 hot mic recording of him speaking boastfully about sexual assault. Clinton's improving prospects are leading many political experts to speculate that some typically red states could go Democratic this election. One state where the numbers are unusually tight is Texas, whose commitment to putting Republicans in office is staunch. Will Clinton win Texas?

Taking this conservative stronghold would be pretty historic, but Trump has maintained a steady, albeit narrow, lead in the state. According to Real Clear Politics, Trump has an average 4.6 percent lead over Clinton. The more recent polls in the average, though, show Trump's lead is in the lower range, at 3 or 4 percent. Anything is possible, and if Trump has one more implosion, then maybe, just maybe, those numbers will sink further. But if he's weathered everything he has thus far in the state, it's also hard to imagine what is left to rattle Lone Star voters enough to throw their support to Clinton.

But even if Trump does win Texas, it'll still be significant if Clinton performs as well in the state on Nov. 8 as she is currently doing in polls. The last time a Democrat got within 5 percent of their Republican opponent in Texas was in 1996, when Bill Clinton got 43.8 percent of the vote, compared to Bob Dole's 48.8 percent.

Clinton has already made some other unprecedented inroads for a Democrat in Texas. Of the top 40 Texas newspapers, all but one has endorsed the former secretary of state.

It's been 40 years since a Democratic presidential candidate won Texas' vote. In 1976, Jimmy Carter carried the state over Gerald Ford. Democrats in the state haven't won a gubernatorial election since 1990. It's the state that brought us Sen. Ted Cruz, for goodness' sake. It's hostile territory for Democrats.

Clinton isn't likely to pull a Carter and take Texas on Nov. 8, unless the polls have been consistently off. But a competitive performance by her in conservative country will only underscore what is already apparent: Trump is unpopular enough to be on shaky ground in even the reddest of states. If the Democratic candidate didn't have ample popularity issues of her own, perhaps we'd be more likely to see the state go blue in 2016. Thus, while it's unlikely Texas will go blue in 2016, 2020 could see the ruby-red state actually up for grabs.

More like this
Purple Blush Is Reigning Supreme On BeautyTok
By Olivia Rose Ferreiro
Are John Legend & Kanye West Still Friends? The Singer’s Latest Update Is Candid
By Brad Witter
Christina Aguilera Took A Powerful Stand At Brighton Pride
By Sam Ramsden
'Scream’s Courteney Cox Has Broken A Major Horror Record
By Sophie McEvoy
Get Even More From Bustle — Sign Up For The Newsletter