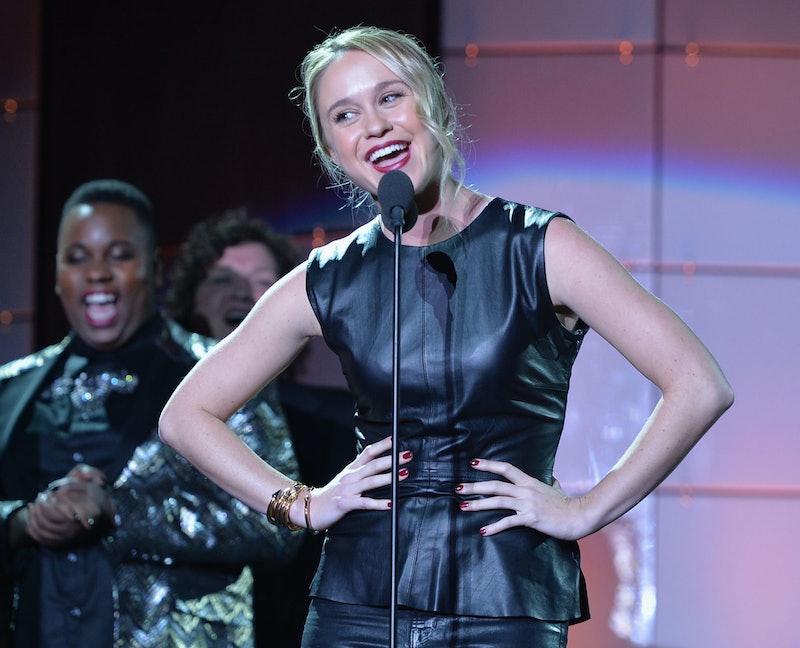 C'mon Ryan Murphy, your fans aren't going to let you get away with this. The two-part 100th episode event of Glee ended with "New Directions" on Tuesday night and there was one important character disappointingly pushed to the sidelines — Becca Tobin's Kitty Wilde. You know, Artie's girlfriend and Quinn Fabray 2.0? Of all of the underclassmen in the New Directions, Kitty had the biggest connection to one of the show's original main characters, so why did Ryan Murphy ignore her for the past two weeks?

We learned on Tuesday night that Artie would definitely be heading to NYC for film school after graduation, but what about the girl and the first functional relationship he's had on Glee that he's leaving behind? Tobin's Kitty quickly went from being a venomous mean girl who manipulated Marley into having an eating disorder during Season 4 to a fan-favorite this season. A transition like that doesn't just happen for no reason and definitely merits more than a single lingering shot during the McKinley High goodbye episodes.

And though Kitty is a great character on her own, there's also the fact that she's romantically linked to Artie, who's been a main character since Season 1. That makes her at least as important as Tina Cohen-Chang. (Maybe more important because we care a lot more about Kitty than the fact that Tina's going to Brown University.)

So what happened to Kitty Wilde? After stepping up to the plate during the New Directions trip to Nationals in LA and singing her heart out during the competition, she fell by the wayside for the past two episodes. Granted that "100" and "New Directions" were both farewell episodes to the glee club and focused on the show's original characters returning for a last hurrah, Kitty's absence was duly noted by Glee fans on Twitter following the episode.

And they're right — we can't be expected to just forget that Kitty and Artie were in a very functional and supportive relationship and we need to know what will happen to them. She's the one who convinced him that he should take a leap of faith and pursue film school in New York, after all. The only acknowledgement of their relationship over the past two weeks was her getting teary-eyed while Artie accepted his diploma. We know that Glee will jump ahead and skip summer vacation in next Tuesday's episode as they always do — if Ryan Murphy thinks ANYONE will be satisfied to find out that Kitty and Artie broke up during those missing months, he's completely wrong. It would be a complete injustice to just ignore one of the show's most-improved characters just for a lack of time management during Tuesday night's episode.

Fans got attached to Kitty and her journey to being a better person, so I'm willing to bet there will be a petition to have her move to New York in the near future. There are plenty performing arts high schools for her to finish out her junior and senior years and with Santana off to Lesbos and Hawaii with Brittany, there's plenty of room for a sassy, sharp-tongued former cheerleader on Glee. Do the right thing, Ryan Murphy — don't continue to ignore Kitty, she deserves so much better.