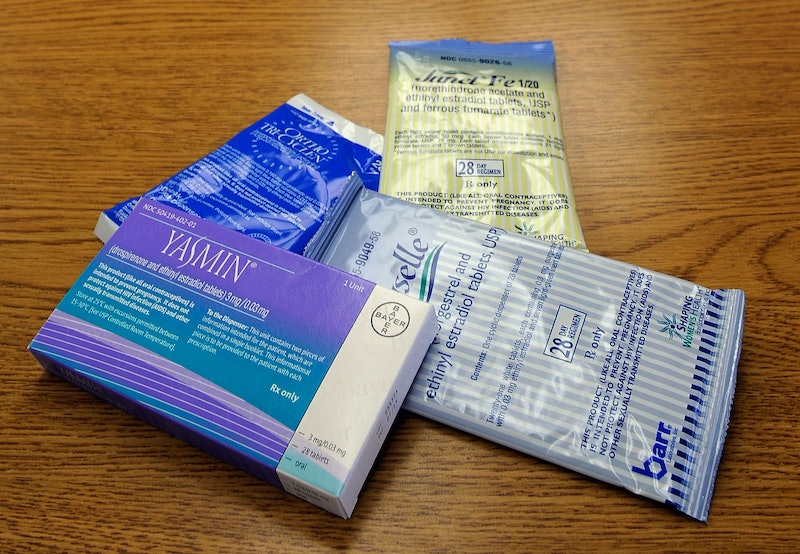 There is a new birth control option in town, and it goes by the name Vasalgel. Unlike what the name may suggest, Vasalgel is not, in fact, a petroleum jelly to be used by women. Instead, Vasalgel is a male contraceptive, currently undergoing clinical trials, that's apparently incredibly effective, reversible, cheap, and lasts for 10-15 years after just one treatment. So why isn't it widely available?

A project spearheaded by the Parsemus Foundation, Vasalgel is a spin-off of the Indian treatment "RISUG," or Reversible Inhibition of Sperm Under Guidance. Sounds scary, but it's pretty simple. Effectively, Vasalgel is painlessly injected into the man's vas deferens under local anesthetic, blocking the plumbing that causes the sperm membranes to burst. The procedure is likened to a No-Scalpel vasectomy, and can be completed in 15 minutes.

Unlike the traditional vasectomy, which requires a more invasive procedure to reverse, the RISUG procedure is easily undone with another injection that dissolves the blockage.

When and if Vasalgel does hit the market, it might be fairly cheap. According to the Parsemus Foundation:

Vasalgel’s developer is committed to making it affordable and widely available. We’ll have to charge enough to make the company sustainable, but for sure it won’t be $800 like long-acting contraceptives (IUDs) for women in the U.S. A contraceptive shouldn’t cost more than a flat-screen TV! It is likely that the cost for the doctor visit will be more than for the product. We’ll also work to get it covered by insurance.

Despite this formidable list of pros, there's a curious lack of buzz around the subject. The Parsemus Foundation bought the rights to RISUG in February of 2010, but more than four years later, there's a decided absence of interest or publicity around the new contraceptive. This is especially odd given the general lack of birth control options for men.

Think about it: Whereas women have a slew of options, including the pill, the female condom, IUDs and the patch, men have exactly two (three, counting abstinence), which are on polar opposite ends of the invasiveness spectrum. On the one hand, men can don the handy dandy condom, which though easy, is not always that effective. On the other hand, men can choose a more permanent solution — the vasectomy — which is less easy, though very effective.

Given that it takes two to tango, it seems only fair that both parties be equipped with the resources to make sex safe from unwanted pregnancies.

In the United States, the most formidable inhibitor of Vasalgel's success seems to be money. Given the relatively low profile kept by the medical device, intentional or not, the Parsemus Foundation has had trouble raising the funds needed to bring Vasalgel to market. While Parsemus' "primary goal is to make an affordable, effective male contraceptive widely available," the baseline necessities have yet to be met.

Though crowdsourcing is often a technique used for unique ventures like these, Kickstarter, one of the largest crowdsourcing platforms, accepts only "creative" projects, for which Vasalgel doesn't qualify. (If interested, you can donate to the foundation here.)

Moreover, because of the one-time nature of the medical device, it feels unlikely that large pharmaceutical companies will be keen to bear the costs, especially given how lucrative for business the pill for women has become. With the contraception mandate, Big Pharma stands to profit enormously from sales of more expensive birth control pills. The Pill is both easy to manufacture and the most popular contraceptive method amongst women.

With competition like this, Vasalgel's success seems dubious at best, especially with Big Pharma pulling at the reigns. Birth control is far more desirable to Big Pharma's business model than a one-and-done method like Vasalgel, regardless of how effective it may be.

This represents an increasingly insidious Big Pharma mentality that seems to privilege capital gains over consumers' health and well-being. Take the recent Hepatitis C drug controversy, for example, which saw a potentially groundbreaking Hep C drug hit the market... for $1,000 per pill. Healthcare companies threw their support behind President Obama's healthcare regulations not necessarily because they believed in making healthcare accessible to everyone, but rather because they also saw an opportunity for growth.

So until Vasalgel can prove its business worth to be more enticing than its medical worth, men in the U.S. may have to continue to bemoan their lack of contraceptive options — and women will have to keep popping pills.

More like this
Michigan’s Governor Is “Going To Fight Like Hell” To Protect Abortion Access
By Andrea Zelinski
I'm 42 & I've Never Had Sex. Is It Too Late?
By Sophia Benoit
Long Live Bennifer!
By Allie Jones
Why The '365 Days' Sex Scenes Are Good, Even If The Movies Aren’t
By Arya Roshanian
Get Even More From Bustle — Sign Up For The Newsletter