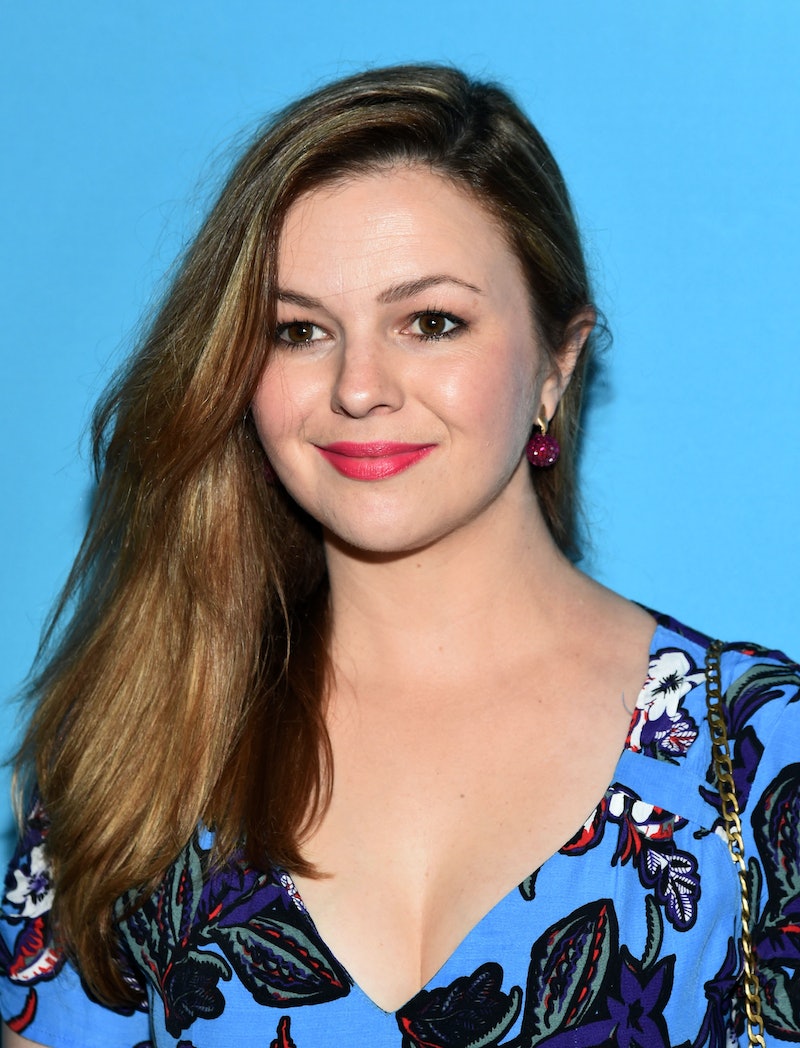 Celebrities are known to announce pregnancies in exciting ways, but this one in particular stands out. In an essay written for Glamour published Wednesday, Amber Tamblyn announced she is pregnant with her husband, actor David Cross, and they will soon welcome their first child, a girl. What makes her announcement so special is how she revealed the news. Rather than sharing a photo on social media, The Sisterhood of the Traveling Pants actor did it via a powerful essay that her daughter will one day be proud to read.

In her essay, titled "The Frame That Holds the Big Picture: How Mothers and Daughters Can Change the Way We Talk About Being Women," 33-year-old Tamblyn says she's "been thinking about motherhood a lot lately," especially with the 2016 presidential election at the forefront, the possibility of a woman becoming the next president of the United States, and the dangerous comments about women that have been made by presidential candidate Donald Trump.

After The Washington Post published that 2005 unreleased audio clip of Donald Trump making disgusting comments about women, Tamblyn recalled her own alleged sexual assault in an Instagram shared on Oct. 9. Alongside a photo of Trump kissing a pageant queen on the cheek, she wrote a lengthy caption about her own alleged sexual assault. Part of the caption read, "That part of my body, which the current Presidential Nominee of the United States Donald Trump recently described as something he’d like to grab a woman by, was bruised from my ex-boyfriend's violence for at least the next week."

In her essay for Glamour, Tamblyn explains how she told her mother about her alleged sexual assault and then how her own mother revealed she once had a similar experience, one Tamblyn's grandmother responded to by saying, "Boys will be boys. You just have to be really careful around them." Tamblyn recognizes how dangerous these words are and why all of the above has gotten her thinking a lot about motherhood.

Motherhood has been heavily on my mind because I am going to be a mother soon. I'm pregnant, with a daughter on the way. I think constantly about the world I am bringing her into. Will I get a phone call from my daughter someday, one she never wanted to make? Will I have to share with her my story, and the story of her great-grandmother’s words to her grandmother? Is it possible to protect her from inheriting this pain? How much do I have to do, as a daughter and a soon-to-be mother, to change not just the conversation about how women are seen, but the language with which conversations are spoken in?

Tamblyn doesn't agree with her grandmother's comments and realizes that "This is what has passed for wisdom, what’s been handed down between women for generations. It continues today. It encourages women to take a backseat in their own lives, telling them it’s okay: men know how to drive and know what they’re doing." She continues, "It tells us to shush, to not make a fuss, to accept the world as it was built for us. It tells us we shouldn’t ask for more than what we are given, from dollar bills to the Bill of Rights. Boys will be boys and girls will be, what? Quiet. Hungry. Subservient. Game."

That's something she hopes her daughter will never have to experience and that is one of the many reasons Tamblyn is voting for Clinton. She believes having a woman as the leader of our nation will change the conversation surrounding women,

And that is how a pregnancy reveal is done, my friends. I have a feeling when her daughter is old enough and is able to read, she is going to look at her mother with extreme admiration.

More like this
Michelle Obama & Taylor Swift React To The Supreme Court Overturning Roe v. Wade
By K.W. Colyard
Adele’s All-Female Lineup Includes Kacey Musgraves, Mahalia, & Self Esteem
By Shahed Ezaydi
'The Undeclared War' Took Inspiration From This Gavin & Stacey Location
By Maxine Harrison
Eurovision 2023 *Might* Be Held In The UK
By Sam Ramsden and Rachel Mantock
Get Even More From Bustle — Sign Up For The Newsletter