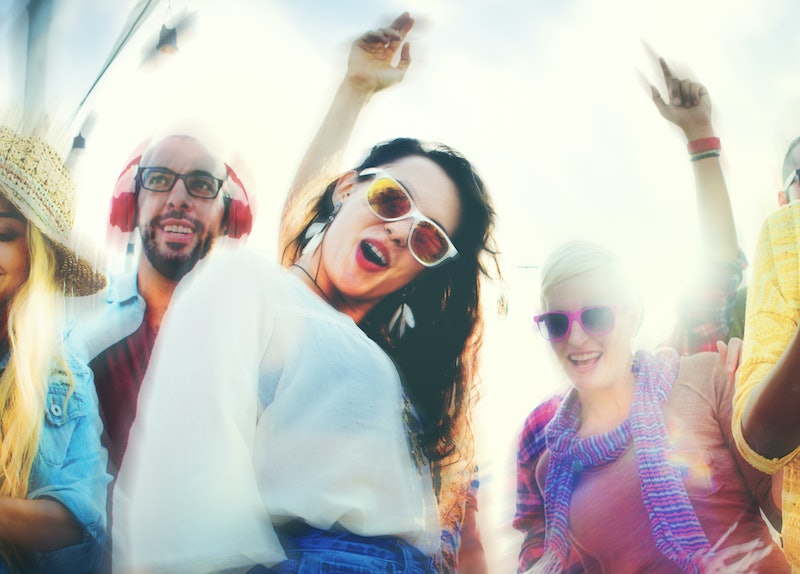 The election this year has a special twist: it's either going to be a massive celebration, or a doomsday kick-off party. Either we're about to elect the first female president in history, or we're about to elect the first reality star in history. It's the first election that we, as young voters, will experience such high stakes. With a candidate in the running who's beyond under-qualified, this election has a lot more at stake than a republican or democratic swing in the White House. It's no wonder we'll need some election themed party games to get through the night — because this, my friends, is the difference between a powerful leader and a human sh*tstorm.

Honestly, how else can we approach Nov. 8 with a positive attitude? How do we spend the night while we await our fate? What do we do to keep our minds occupied and our spirits alive? Duh — we play games. Yes, that's right, we play a bunch of games to take the edge off and to make the night fun, rather than terrifying. Because after you vote, there's nothing you can do but wait. And anxiety and boredom can be a terrible combination. So, if you haven't figured out how to spend your night yet, you might want to consider trying out some of these election-themed party games ... because what do we have to lose? Besides the country's integrity, of course.

Create your own trivia game! Write down facts on the back on index cards pertaining to presidents of the past. Write the answer on the front of the card and stack them upside down. Whoever wins the most points doesn't have to chip in for that take out pizza you're obviously going to order.

Pin The Tail On Trump

Print out a picture of Trump, or draw one, if you're crafty. On a separate piece of paper, draw a tail. Add some tape to it and hand it to each player after they've been blindfolded and spun around twice. Whoever gets the tail in the most interesting place gets a hug, because they'll need one if he wins.

Before the results start coming in, have everyone at your election party write down their guesses for the electoral college. Whoever guesses the most correct states, wins the satisfaction of being intuitive and whatever Halloween candy you have left lying around the house.

One person will go on Trump's Twitter account and write down a list of his most outrageous tweets. For each round, you'll read one real tweet, and one fake one that you made up. Each guest who guesses the true tweet, gets a point.

It's just like regular charades, but in this election-themed game, you'll only be acting out presidential scandals of the past. It will force a little bit of perspective and remind you that what was once a huge deal, is now just a story of the past. Hopefully one day we'll all laugh bout this election and the fact that Trump *almost* became the next president.

Hillary Clinton's most notable campaign song is "Fight Song" by Rachel Platten, which was remixed a cappella style by a bunch of celebrities, is a super uplifting and applicable song for this election. Use it to play freeze dance — get your blood going and have fun.

We all know about Trump's plan for building a wall. For this game, you're going to play Jenga, as you would, but in this context, Jenga is that very wall. So whoever pulls out the piece that makes the wall crumble, wins!

Trump likes to use a lot of the same words. He's even got some catch phrases and terms that the public love to make fun of him for. Like: HUUUGE, bigly, WRONG, phenomenal, crooked, nasty, loser, moron, criminal. Try playing Scrabble with your party guests, but make a rule: you can only use words that Trump over-uses. It will be easier than you think! Winner gets the last beer.

It's like hot potato, but it's hot orange because Trump is orange. Get it?! Get your guests to form a circle, put on some music after electing one person to DJ, and whoever is holding the orange when the music stops is out! LOSER!