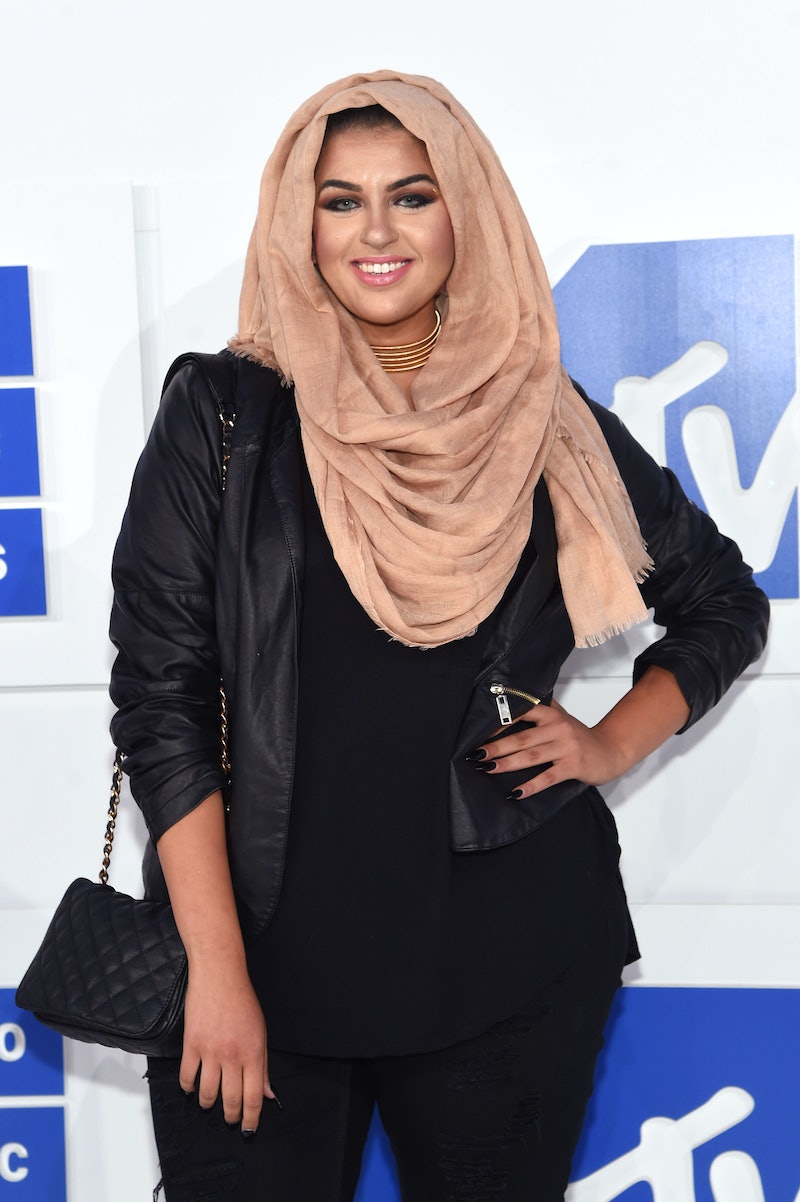 When Amani Al-Khatahtbeh was 17, she started a blog called MuslimGirl, which has now grown into a full website and a revolutionary force in the media. At the top of MuslimGirl, in bold pink writing, is the phrase: "Muslim Women Talk Back." It doesn't take long to see that's exactly what's going on, with articles ranging from political opinions ("I'm A Muslim Woman & I'm Thankful for Donald Trump") to style tips ("Modesty Is Not An Excuse: How To Find The Perfect Workout Clothes") to personal stories ("The 7-Minute Subway Prayer — by the Man in the Orange Jacket"). The site functions as a hub for Muslim women's experiences, giving access to their (often overlooked) perspective and providing a space for Muslim women to connect with each other.

Among many other achievements, Al-Khatahtbeh was named to the 2016 Forbes 30 Under 30 list, making MuslimGirl the first Muslim company to be featured. Now, Al-Khatahtbeh has published a memoir, Muslim Girl: A Coming of Age Story in which she details the experiences that led her to where she is today.

Amani Al-Khatahtbeh was nine years old and living in New Jersey when 9/11 happened. While interviewing her parents for this book, she realized her parents had protected her in so many ways from Islamophobia in the days, months, and years following the attacks.

"I'm so glad I have this opportunity to chronicle their experience right now," she tells Bustle. "Because those are the stories that get completely buried in this ongoing conversation about the war on terrorists. We don't think about the way [hateful rhetoric] directly impacts the lives of Muslims in their day-to-day."

For instance, a vendor at the market where Al-Khatahtbeh's father worked launched a petition to kick out the Muslim vendors, even coming to her father's store and cursing him out in front of customers. Memories like this came flooding back to Al-Khatahtbeh as she interviewed her parents.

"All this hateful rhetoric, we don't think about the way it directly impacts the lives of Muslims in their day-to-day."

Al-Khatahtbeh wants to make it clear, though, that while one of the goals of her book is to expose the Islamophobia she experienced, her story is not the only story.

"It's important to know that the experiences that I had are literally the least of what Muslim women have had to endure as a result of Islamophobia," she says. "Especially with the war on terror. Especially as a result of our foreign policy after 9/11 happened."

In 2005, Al-Khatahtbeh's family moved to Jordan, her father's home country. "The thing that surprised me the most was discovering that the reason for our move to Jordan was that my parents were scared of staying in the country," says Al-Khatahtbeh. "It was so shocking to me, because you know, even right now it's kind of like a joke, like 'Oh my god, if Donald Trump is president, I'm totally moving out of the country, I'm totally moving to Canada. ' And it's a joke, but I didn't realize until that moment that that's exactly what my family ended up doing."

Al-Khatahtbeh was just 13 when they moved, but she had already begun lying about being Muslim in the United States. "I was so scared about everyone's judgements, and I was so alienated by everything I was hearing on the news," says Al-Khatahtbeh. "[It was] almost pushing me away from my own identity, my own background and heritage."

One aspect that really spoke to Al-Khatahtbeh was Islam's legacy of gender equality. "Islam really laid the basis for gender equality fourteen hundred years ago in society," she says. "At the time that it was revealed, it gave an unprecedented amount of rights to women... That's why when people talk about Islamic feminism, or they call me a Muslim feminist, to me it sounds redundant. It sounds like those are two words that are synonymous with each other."

"That's why when people talk about Islamic feminism, or they call me a Muslim feminist, to me it sounds redundant. It sounds like those are two words that are synonymous with each other."

After seeing this contrast between the way Islam was portrayed in the West and the realities in Jordan, Al-Khatahtbeh was determined to do something about it when she returned to the United States. When she was 17, Al-Khatahtbeh launched MuslimGirl, and she began publishing blogs on the site with friends from her mosque. In 2015, the site developed a volunteer staff and took off as a company.

Al-Khatahtbeh says that the biggest lesson she's learned throughout her MuslimGirl journey is the power of sisterhood. "When I talk about MuslimGirl, I refer to our team as if they're a league of superwomen, because they are," she tells Bustle. "All of that [success] happened from... young women, literally millennial women with absolutely no resources at their fingertips but social media and the internet. And we made it happen. And that only was possible because of the fact that we all came together as women and were like 'OK, we have to stand together.'"

Al-Khatahtbeh also praises the allies who helped them along the way. "There are so many non-Muslim men and women who have access to these spaces and they recognize the struggle that we're in. They've used their privileges to elevate our narrative and to pull us in," she says.

In fact, the publication of Al-Khatahtbeh's memoir was the result of ally-ship between women: the book's editor, a black woman, pushed behind the scenes for its publication.

Al-Khatahtbeh says: "I thought it was just so poetic, that it was a black woman, another woman of color... who had access to the space and was taking the publishing industry by storm. And she was like 'Alright, I'm going to use my position now to uplift other marginalized women, too, to get this kind of platform.'"

One of the biggest misconceptions about Muslim women, in Al-Khatahtbeh's eyes, is that they're voiceless and oppressed. "One thing that I'm super grateful for is how people have used my story or used MuslimGirl's story as an example of how Muslim women are empowered, and how we do have our own voices and our own autonomy," she says. "They look at MuslimGirl and see all the many strong, powerful voices that make up our blog, that are speaking back to society."

Al-Khatahtbeh is often asked how she remains confident in the face of so much adversity and hate. "I think that it really does come with connecting with other like-minded individuals and creating the support system," she says. "It gets really easy for us to turn our backs on each other during this time when we're all being targeted... but really our strengths come from turning inward and finding that support with each other, especially as women."

More like this
Watch Jacinda Arden’s Devastatingly Honest Resignation Speech
By Sam Ramsden
24 History-Making Black Women You Probably Didn't Learn About In School
By Ayana Lage and JR Thorpe
25 Inspiring Quotes From Black Women To Celebrate Black History Month
By Kyli Rodriguez-Cayro and JR Thorpe
Here's How Netflix Should Adapt Prince Harry's Memoir Into A Movie
By Ginny Hogan
Get Even More From Bustle — Sign Up For The Newsletter
From hair trends to relationship advice, our daily newsletter has everything you need to sound like a person who’s on TikTok, even if you aren’t.