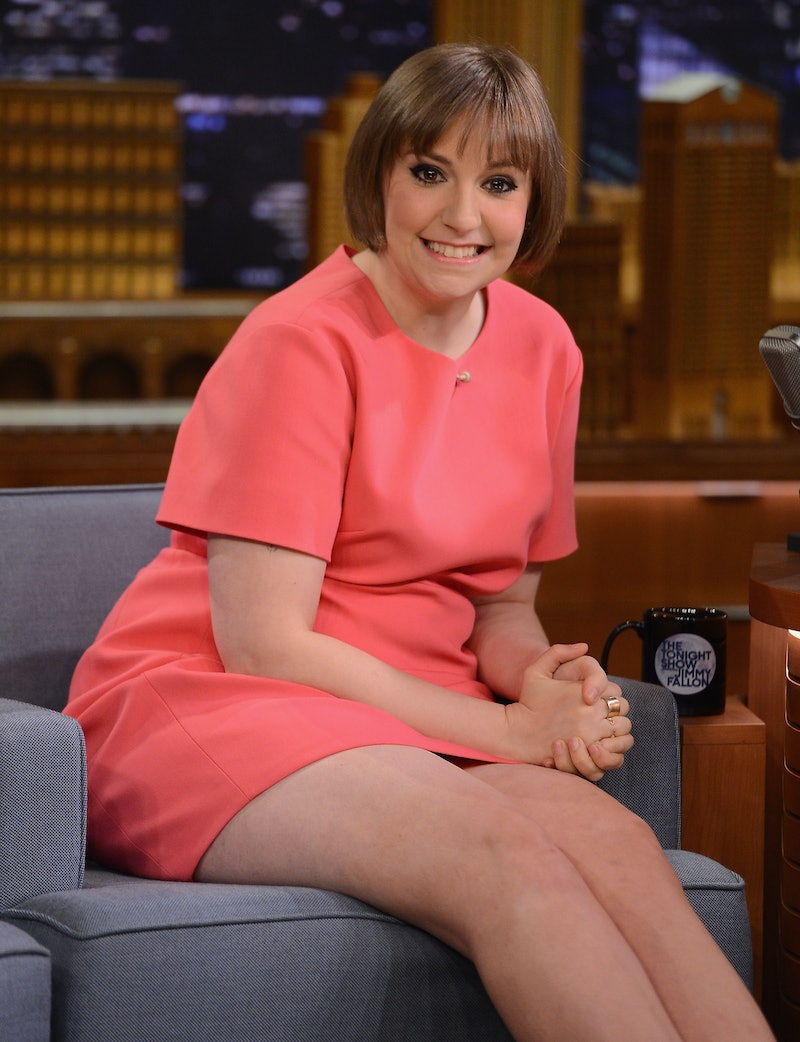 Joan Rivers is at it again. On the Howard Stern show on Tuesday, Joan Rivers insulted Lena Dunham because of her weight and claimed that she is sending a bad message because of it. During the show, Rivers said, "Lemme ask you something. Lena Dunham, who I think is, again, terrific — how could she wear dresses above the knee?" Um... by wearing dresses above the knee? In fact, she's done it before! It's quite easy, really.

Stern, who has had his own issues with Dunham in the past, responded to River's jab, "Well, I think the thing we love about her is that she doesn’t give a shit... She did a whole [Girls] episode in a bikini. It was the funniest fucking thing I ever saw." Rivers then added, “But that’s wrong! You’re sending a message out to people saying, ‘It’s okay! Stay fat! Get diabetes. Everybody die. Lose your fingers."

Well, that's a big jump. There's a huge difference between being supermodel skinny and promoting poor health. Dunham isn't a size zero and, obviously, there's nothing wrong with that, but she certainly isn't obese and at risk for diabetes or other health issues associated with weight. And she isn't promoting anything except being comfortable with your body no matter what your size.

Stern previously came into conflict with Dunham himself when he described Girls as, "It's a little fat girl who kinda looks like Jonah Hill and she keeps taking her clothes off and it kind of feels like rape. She seems — it's like — I don't want to see that." Dunham called into a later episode of his show and Stern apologized. Dunham said at the time, "I'm not that fat, Howard. I don't mean to take major issue with you about this. I'm not super thin, but I'm thin for, like, Detroit."

During the Joan Rivers interview, Stern defended Dunham and all women in comedy saying,

One of the biggest moments of my career — I knew my ass had cellulite. I knew it was going to make people laugh. I’m allowed to do that, and women and men don’t say ‘Oh my God, he showed his ass,’ ’cause I’m a guy. Why can’t women be liberated like that?

This was in response to Rivers' old-fashioned thinking when she said that Dunham is funny, but suggested that she found success in spite of her looks adding, "But don't say that it's okay to tell other girls they can look like this. Try to look better!"

In the interview, Rivers seems to have an understanding that Dunham would tell her to screw off if she tried to give her advice, but maintains that Dunham is promoting a negative message and says that she is upset about hypocrisy more than anything else. Rivers is the only one being hypocritical here. She says she supports Dunham and finds her funny, but sticks by the idea that she shouldn't wear certain clothes or be laughed at physically.

Not only is Rivers dismissing a big part of what Dunham does — promote body acceptance — she's also being hypocritical because she makes fun of the way she herself looks ALL THE TIME. On Fashion Police, she's constantly commenting on her aging body and her plastic surgery with the point, seemingly, being that if she owns it and is comfortable in her own skin, then other people can't use it against her. Or, body acceptance. Rivers has been working in comedy since the 60s and using her appearance as part of her jokes for a very long time, if anyone should understand where Lena Dunham is coming from, it's Joan Rivers.