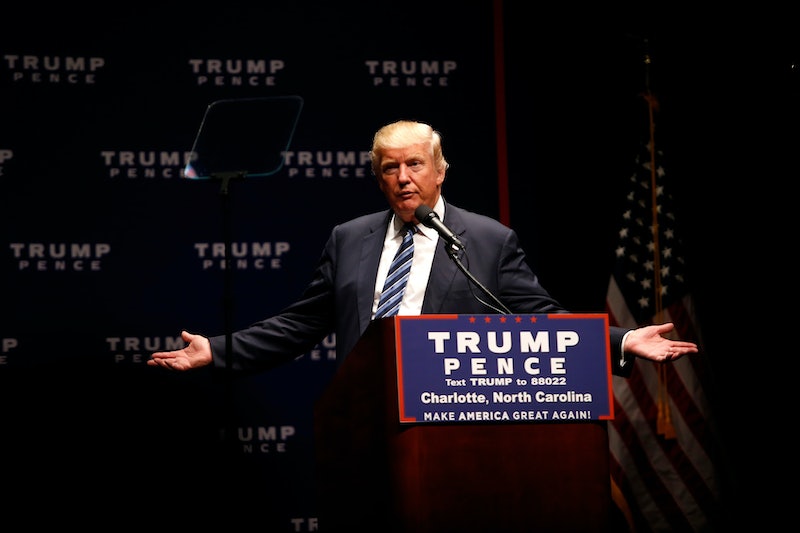 Despite Donald Trump's repeated claims that "nobody respects women more" than he does, the billionaire businessman's presidential campaign has been marred by repeated misogynistic outbursts. And since the 2005 Access Hollywood video was first shared on Oct. 7 — where Trump can be heard bragging that he can grope women without consent — the Republican nominee has been losing female supporters. In fact, many Republican women have abandoned Trump, refusing to stand by both his misogynistic rhetoric and, oftentimes, the Republican party that allows him to get away with it. And sensing his un-presidential behavior from the very beginning, other conservative female politicians never offered their endorsements to begin with.

In fact, female politicians and pundits within the Grand Old Party are swearing off Trump twice as fast as their male counterparts, according to FiveThirtyEight. It might not be surprising that women are prone to back away from a candidate who's been accused of inappropriate behavior by at least 11 women. Trump has firmly denied each claim and has even threatened to sue the women who have come forward after the election ends. And as for the Access Hollywood tapes, he claims he never acted on what he flagrantly dismisses as "locker room talk."

Ultimately, women's refusal to support Trump doesn't need much explaining, but the force with which some longtime Republican women have rejected him deserves to be documented. And frankly, celebrated. Here are 12 Republican women who have put their foot down to Trump:

These comments solidified her place at the top of the list of anti-Trump women who still consider themselves Republicans.

In a scathing indictment of what she sees as the bystander syndrome plaguing Republican men who are afraid to unendorse Trump, former GOP staffer Amanda Carpenter pulled no punches in an op-ed for The Washington Post published Oct. 25. As a former communications director for far-right conservative Sen. Ted Cruz of Texas and former Sen. Jim DeMint of South Carolina, Carpenter wrote that she's all too familiar with the claim that Republicans are inherently anti-woman. For years, she says, good Republican women like her have "fended off" those characterizations.

"What did we get for it?" she writes. "The nomination — by way of a largely older, male voting base — of a brazen and unapologetic misogynist."

But then, Carpenter got personal, asking her male colleagues why none of them bothered to speak up on her behalf, or on behalf of the wives, daughters, and mothers that Republicans so often trot out to highlight their commitment to "family values."

"I want to ask the men leading the GOP some questions," she wrote. "Why didn't you defend women from this raging sexist especially after so many Republican women — for so many years — eagerly defended the party from charges of sexism? You must make us out for fools."

"I didn't leave the GOP," she wrote in conclusion. "The GOP left me for Trump."

Calling herself "a proud Republican," the CEO of Hewlett Packard officially defected from the GOP candidate in early August. In a Facebook post on Aug. 2, Whitman called out Trump's demagoguery, saying it has brought the Republican party (and the nation) to a dangerous place.

A moderate Republican, Maine's Susan Collins showed Trump the door before the Access Hollywood tapes leaked. In an op-ed for The Washington Post on Aug. 8, Collins explained why she simply cannot support Trump.

"Donald Trump does not reflect historical Republican values nor the inclusive approach to governing that is critical to healing the divisions in our country," she wrote. And while she hoped Trump might "tone down" his rhetoric ahead of the general election, Collins knew that was a long-shot.

The moderate Republican congresswoman from Florida, who in the past has made headlines for her supportive stance toward her transgender son, knew early on that this presidential matchup was a no-win for her. Back in May, she told the Miami Herald:

"I will work with whomever is chosen by the American people to serve as president, because I deeply respect the American constitutional system." But, she added, "in this election, I do not support either Donald Trump or Hillary Clinton."

This Alaska Republican is also generally considered a moderate, voting against the defunding of Planned Parenthood and in favor of marriage equality. Throughout her 14 years in the U.S. Senate, she has often voted for and spoken up in favor of women's rights. So perhaps it's no surprise that Murkowski was quick to jump on the "Dump Trump" bandwagon. She officially did so on Oct. 8, the day after the Access Hollywood tapes were released.

Trump has never been a big fan of Condoleezza Rice, George W. Bush's former Secretary of State. But a full decade after Trump called her a "bitch," Rice had her revenge — and it was short and sweet. On Oct. 8, Rice joined her contemporary Republican women and called shenanigans on Trump's misogyny.

New Mexico's Republican governor didn't endorse Trump in the first place, and after the Trump tapes were released, the Mexican-American politician made it clear he would never get her vote. And given that Martinez is the chair of the Republican Governors' Association, Trump may not be able to rely on support from other heads of state.

"What Trump brags about is appalling and completely unacceptable," Martinez said in an Oct. 8 statement reported by the Albuquerque Journal. "No woman should ever be treated the way he claims he treated women. Unfortunately, there is a pattern of disturbing conduct and offensive rhetoric that raises serious questions about his fitness to be President. That's why I have withheld my support from the very beginning, and will not support him now."

Although her boss, New Jersey Gov. Chris Christie, appears ready to stay by Trump's side until the bitter end, the Garden State's highest-ranking female politician won't be following suit. Guadagno told NJ Advance Media after the Access Hollywood tapes came out, that she "can't support Hillary Clinton, and I won't vote for Donald Trump."

This Utah Republican said she was on the fence about voting for Trump — until the 2005 tapes were released. At that point, she told The Salt Lake Tribune, she couldn't stomach supporting him any longer.

"His behavior and bravado have reached a new low," she told the paper on Oct. 8. "I cannot vote for him. For the good of the party, he should step aside."

This Alabama Republican spent the past six years in the House of Representatives, but it took her only hours after the 2005 tapes were revealed to make clear that Trump is unfit to be president.

The junior senator from New Hampshire has struggled to find her place in this year's race, where she's facing an uphill battle to keep her Senate seat against a challenge from Democrat challenger Gov. Maggie Hassan. Although she declined to step away from Trump through many of the campaign's endless scandals, the leaked Access Hollywood recording was apparently the final straw. Just two days after the Trump tapes dropped, Ayotte rescinded her endorsement.

For a Republican, Trump's backing among female voters is exceptionally low and his dwindling support among his own party's female politicians is just one indicator. In 2012, for reference, Barack Obama won the women's vote by 11 points. According to an NBC News/Wall Street Journal poll conducted in October, Hillary Clinton has a 20-point lead on Trump among women. Now it's up to the Republican Party to decide whether or not it will stand behind the women who are appalled by Trump's penchant for misogynistic comments, because drawing the line between what's presidential and what is blatantly indecent should have happened long ago.