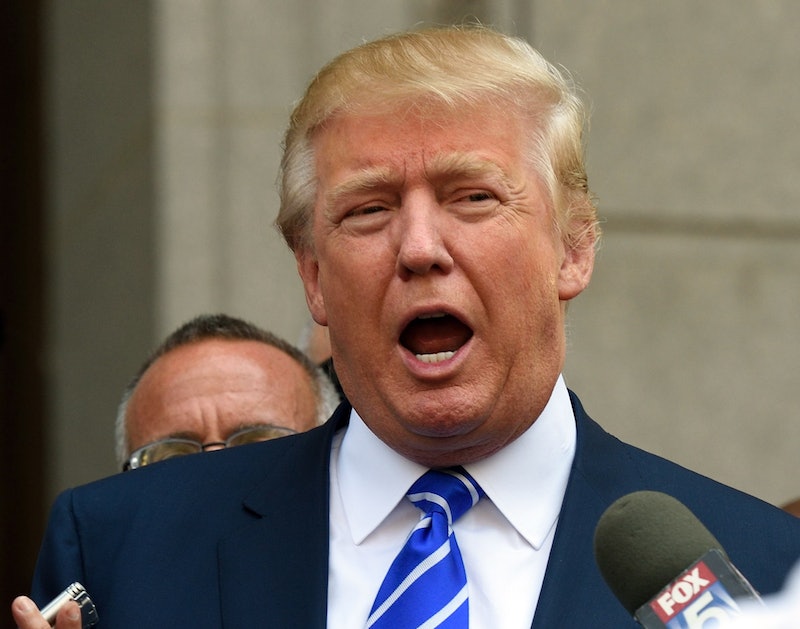 It would hard to be on Twitter and miss Donald Trump's complaints about Fox News' Megyn Kelly. After Kelly challenged him on some sexist comments he has made during the GOP debate, Trump criticized Kelly's lack of professionalism and said during an interview that "you could see that there was blood coming out her eyes, blood coming out of her wherever." In doing so, Trump proved — in case anyone still needed proof — that he does indeed have a tendency to make misogynist comments. In any case, Trump has certainly lost the respect of women, if he ever had it in the first place.

His whining about Kelly is hardly the first time he has said something offensive to or about women. He's said some despicable things about many different women, opposed abortion, made awkward comments about his daughter, and the list goes on. A Daily Kos writer went so far as to say that Trump would only win a general election if the 19th Amendment, which gave women the right to vote, was repealed. So even if Trump has made the rare feminist comment here and there, women are less than impressed with Trump — with just 20 percent of women voters perceiving him favorably — and here are some of the reasons.

1. He Quoted A Tweet Calling Megyn Kelly A "Bimbo"

... among other things. Apparently alluding to her menstrual cycle — though he insists he was talking about a nosebleed — wasn't sufficient; Trump had to go and call her GOP debate questions, in which she challenged him on sexist comments he has made, "ridiculous" and "off-base." He also said that he had no respect for her, and accused her of asking "a very, very nasty question" — after all, how dare she be "very angry" about his sexism?

2. He Made Sexist Remarks About Rosie O'Donnell

Trump and O'Donnell have a long history of feuding, but that does not by any means justify his response to Kelly, who called him out during the GOP primary debate for describing some women as "fat pigs," "dogs," "slobs," and "disgusting animals." Trump insists that he only ever described Rosie O'Donnell like that — he's lying, of course, but that doesn't make it any less offensive.

3. He Once Made A Weird Comment About His Daughter

Trump once commented on his daughter Ivanka Trump's "nice figure," jokingly saying that perhaps he'd "be dating her" if he wasn't her father. Well, everyone took it as a joke — his representative, Jim Dowd, said that he was making fun of his own tendency to date younger women. But his comment, made in the context of a question about Ivanka posing in Playboy, simultaneously objectified her, and the fact that people found it funny was problematic as well.

4. He Shamed A Lawyer For Pumping Breast Milk

When providing extensive testimony in a lawsuit about a failed Florida real estate project last month, he called opposing lawyer Elizabeth Beck "disgusting" when she said she needed to take a medical break. Beck needed to pump breast milk for her three-month-old daughter, and Trump — who previously called Beck's questions "very stupid" — and his lawyers objected. When Beck took out the pump to make her point clear, Trump left the room, thereby ending testimony for the day.

5. He Said Something Inappropriate To A Former Playboy Playmate

Former Playboy Playmate Brande Roderick was once in the boardroom with La Toya Jackson and Bret Michaels, explaining to Trump, his daughter, and Piers Morgan why they shouldn't be fired. At one point, Michaels said that Roderick "got down on her knees" to passionately say that she wanted to do this. In an unsurprising turn of events, Trump focused on that comment, saying that, "It must be a pretty picture. You dropping to your knees."

It's tempting to make fun of Trump, to laugh at him. But the problem is that he doesn't care, and it is alarming that there are many people out there who take him seriously and support him. His unabashed apathy allows him to get away with all of these things and more; despite the backlash he receives, he continues to live and breathe misogyny. It is unlikely that Trump could defeat Hillary Clinton or Bernie Sanders in a general election, but the lip service he gets from various media platforms should concern us, because it means that he is succeeding in his efforts to keep the public spotlight on himself.