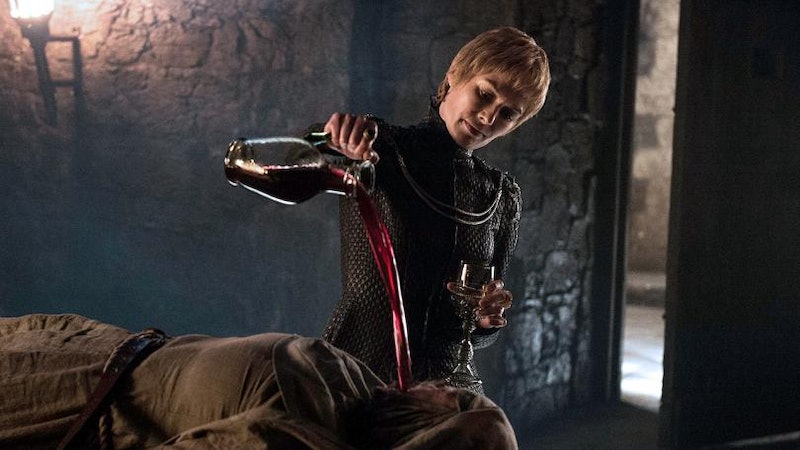 Oh, heavens. Depending on how big of a Game Of Thrones fan you are (and how sacred you treat plot details), then this news could either be the best thing ever or the absolute worst. As reported by Movie Pilot, Game Of Thrones' Season 7 plot has been leaked online. The spoilers, which originally appeared on a Reddit thread shared by a user who has since mysteriously vanished from the site, go into a great amount of detail about some major upcoming plot points. While there's obvious skepticism over the authenticity of these Game Of Thrones leaked spoilers, they're so precise, that they seem like more than just fan theories. And making these details seem all the more authentic, GOT 's Nathalie Emmanuel even tweeted her disappointment using the hashtag #spoilsports. Why else would she voice her concern?

Of course, the highly anticipated season of Game Of Thrones doesn't premiere until summer 2017, so fans are understandably excited about it. And maybe they're even growing a little impatient — hence the supposed spoiler leaks. As always, there's a great deal of speculation regarding what twists and plot development will happen on the show. That's why it's not surprising that the plot details, which have been revealed in this potential Game Of Thrones leak, touch upon some existing theories which have been previously posted by fans of the show.

There's always something incredibly fun about fan communities speculating about potential plot twists. But coming up with theories is completely different than finding out an actual spoiler and telling everyone about it. I'm very much of the belief that there's a certain etiquette which needs to be followed when it comes to spoilers, and this particular one has completely surpassed those boundaries.

After all, for many, it's incredibly frustrating to look forward to watching something where you already know all of the main secrets. If you're a major fan of any show, then you likely already try to avoid social media until you're completely up-to-date with the latest episode. So to divulge spoilers this early — before the seventh season of Game Of Thrones is even close to premiering — isn't just frustrating, it also feels a little callous.

Once those spoilers are out there, they become pretty difficult to avoid. The internet does not treat spoiler purists kindly, and so it feels uncomfortably likely that fans could stumble upon these leaked details without even looking for them.

This set of in-depth spoilers answer questions that have been baffling fans since the end of Season 6. Without revealing too much (I'm personally choosing to opt out of seeing any spoilers), they concern mysteries surrounding Jon, Daenerys, the White Walkers, and what exactly Lyanna whispered to her brother Ned. And if you dare, you can read the in-depth spoilers for yourself over on this Reddit thread, which compiles all of the GOT leaked plots for you — just keep the information to yourself, yeah?

Because, honestly I neither understand the point of spoilers or want to ever hear them. To me, they just aren't fun. If I'm truly invested in a show, then part of the enjoyment comes from feeling the thrill of a well-executed twist. And these leaked details seem like they may ruin a lot of the elements which make GOT so exciting.

However, let's all bear in mind that there's still a chance that these spoilers could be false. Just because Emmanuel voiced her concerns on Twitter, that doesn't necessarily bring any credence to the idea that she was responding because the specific spoilers may be true.

Her message may be more a critique on the mentality of individuals who seem eager to spoil shows for other people. In which case, I totally agree. And whether these particular spoilers happen to be correct or not feels a little besides the point — it's the intent with which they've been shared which is, as Emmanuel stated, “disappointing.”

So please, if you have gone ahead and read the potential Season 7 spoilers, keep those plot lines to yourself. Whether they turn out to be true or not, fans deserve the choice to remain patient and pure until the episodes start again in 2017. And frankly, that goes for every show. If you know a spoiler, then keep it to yourselves, guys — nobody likes a spoilsport.