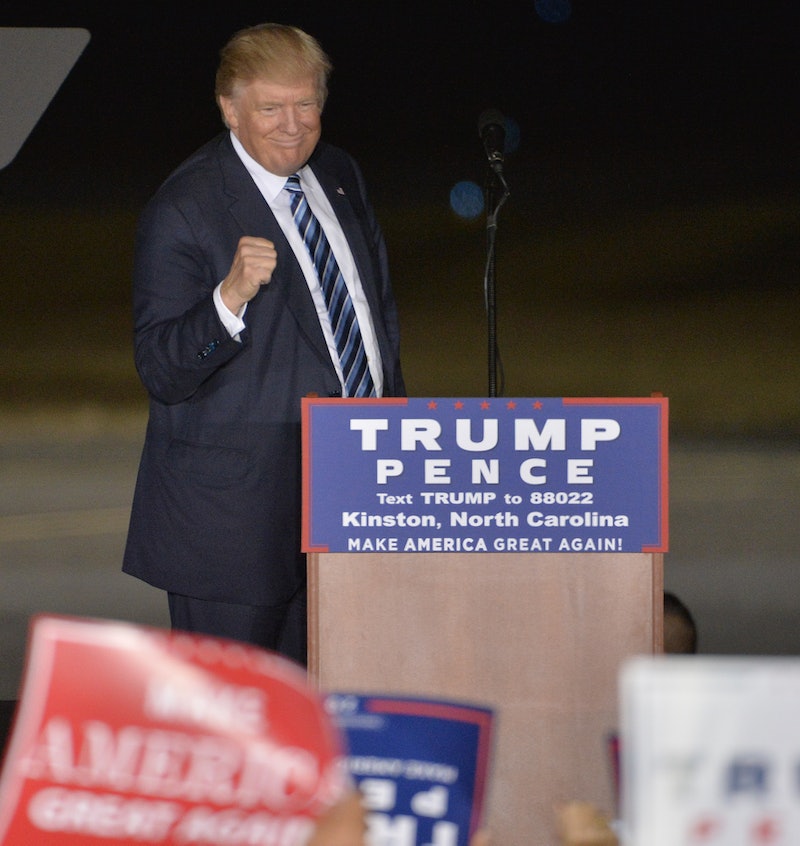 Donald Trump's campaign has admitted to using "voter suppression operations" in an attempt to stop Hillary Clinton from becoming president, Bloomberg Businessweek reported. Bustle has reached out to the Trump campaign for further explanation, but they declined to comment.

Clinton has polled consistently higher than Trump among target voter demographics — she leads him by 10 percentage points among women, by 27 percent among unmarried women, by 77 percent among African Americans, and by 70 points among Latinos. In an attempt to combat his unfavorable ratings, a senior Trump campaign official admitted that they have implemented strategies to prevent women and African Americans from voting for Clinton. That's a laughable way to suddenly "care" about groups of people the campaign has ignored this entire election.

“We have three major voter suppression operations under way,” an anonymous senior official told Bloomberg. Specifically, he revealed that the campaign has targeted "idealistic white liberals," young women, and African Americans. Trump has consistently used divisive and racist rhetoric, often making women and African Americans the target of his vitriol. He's been on record bragging about sexually assaulting women, as well as referring to them as "fat pigs" and "slobs." He's advocated to reinstate stop-and-frisk, a policy which was ruled unconstitutional and that directly targeted and oppressed minorities.

The Trump campaign has consistently ignored and treated these voices as inferior throughout the election cycle. Kaylie Hanson Long, national communications director for NARAL Pro-Choice America, tells Bustle that "this is yet another insult to women from Donald Trump."

"Does he really think we weren't paying attention to his threat to overturn Roe v. Wade, watching the video where he brags about sexually assaulting women, and listening when he said he would punish us for having an abortion? You better believe we've voting in November, and certainly not for him," Long tells Bustle.

These "voter suppression operations" are really just a fancy way of saying "targeted advertisements," which, at the end of the day, aren't completely uncommon in a presidential campaign. However, this strategy reveals a larger truth among the Trump campaign: No one is expecting Trump to win this election, and his campaign really doesn't care about marginalized voices.

Kierra Johnson, Steering Committee Member of the All* Above All Action Fund, said she was "disgusted" by the Trump campaign's voter suppression strategies. "It’s truly a sign of desperation when you give up trying to win people over and instead hope that poor turnout works in your favor," she said in a statement.

The targeted ads have appeared online and on the radio, and their strategy is manifest in Trump's speeches and debate performances. Whenever he's mentioned things like Clinton's support for the Trans-Pacific Partnership? That's a "voter suppression operation" in place that's aimed at turning off those "idealistic young liberals" (aka Bernie Sanders supporters). See an ad pop up on your Facebook that shows a South-Park-style cartoon of Clinton calling African Americans "super predators"? That's the Trump campaign's "voter suppression operations" to draw African American voters away from Clinton. And let's not forget the three-and-a-half-minute Facebook Live press conference Trump held with the four women who've accused Bill Clinton of sexual assault. Yet another "voter suppression operation" to dissuade young women from voting for Clinton in the final weeks of the campaign.

Although she said she's not surprised by it, Johnson continued to express her disdain from Trump's strategies:

We already know that Donald Trump would — if given the chance — push policies that exclude and marginalize these same communities. Trump wants to punish women who’ve had an abortion, wants to make the Hyde Amendment permanent, and has utterly failed to address police killing of Black women, men, and children. Of course the only thing this campaign offers to young people, women, and Black communities is manipulation and fear designed to keep us home on Election Day.

Amber Phillips, a Color of Change PAC volunteer, tells Bustle she wasn't surprised by this tactic either: "Of course he's using voter suppression tactics! White conservatives in this country have been suppressing the vote and rights of Black people and women since the Constitution was expanded to give us full access to democracy."

The past 16 months have been a prime opportunity for Trump to reach out to women, liberals, and African Americans in a genuine attempt to court these voters and to get them on his side. He's had 16 months to think through the issues affecting these communities and formulate specific policies to help them. He's had 16 months to talk to members of these communities and to try to understand what issues are most important to them.

Instead, Trump has spent 16 months running a campaign by and for white men. He's run a campaign that has been completely oblivious to 51 percent of the population who continue to fight for equal rights; he's run a campaign that has called Mexicans (nearly 18 percent of the U.S. population) "rapists" and "criminals." He's singled out African Americans in the crowd at his rallies, he's generalized and said that all of us live in inner cities, and he's genuinely insisted that we have nothing to lose — because we're living in such poverty and among irreparable violence — by electing him as our next president.

The Trump campaign has finally decided to reach out to women, liberals, and African Americans in what they think is a meaningful and significant way. Too bad there's less than two weeks left until Election Day, and I'm fairly certain these voters won't forget the way Trump has demeaned, degraded, and devalued their voices for the past 16 months.

"I’ve got news for Trump: his sneaky Facebook fear campaign is not going to work. We’ve fought too long and come too far and we will be casting ballots come November 8th. I hope he's ready to reap what he has sown," Johnson said.