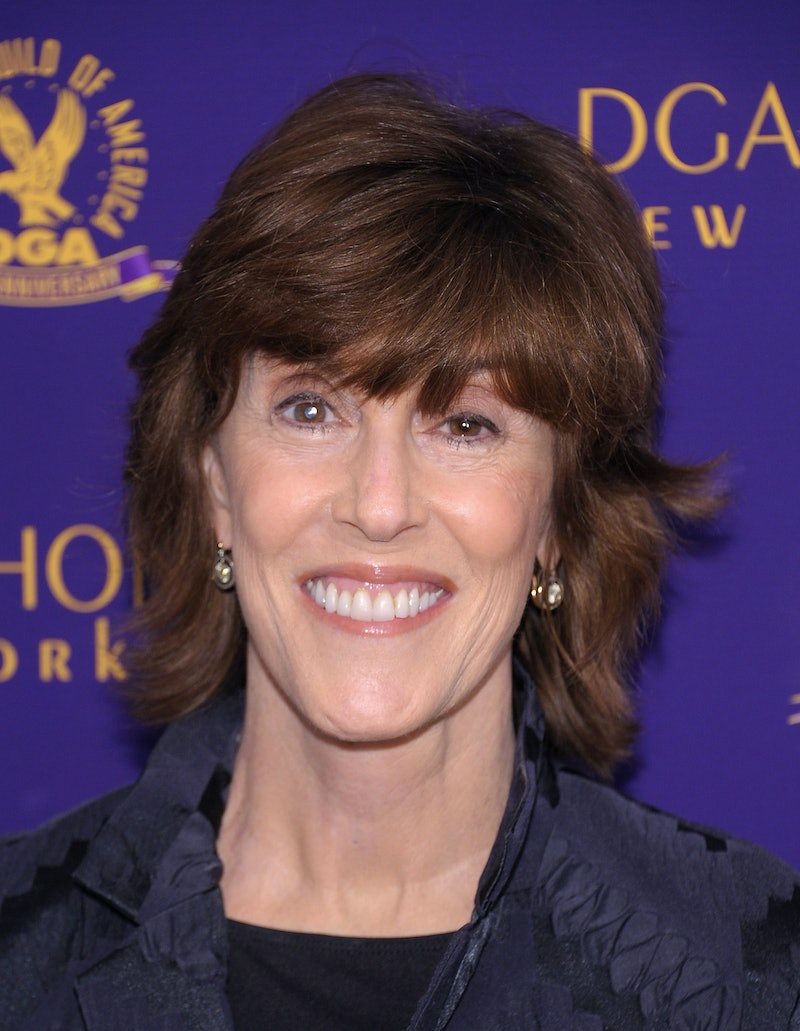 In the pilot episode of Amazon's Good Girls Revolt , the character Nora Ephron says "I don't joke about writing or cooking." For those who know the Oscar-nominated writer/director's films and novels, that's almost too perfect. How accurate is the Nora Ephron character on Good Girls Revolt ? Before achieving Hollywood fame and making us swoon over well-furnished, extravagant kitchens, she was a journalist who paved the way for women in the field today.

She's played by Grace Gummer, who previously played a freelance journalist on The Newsroom . There are a few differences between Ephron's life and the show. Good Girls Revolt takes place at the fictional News Of The Week publication. In real life, Ephron worked for five years at The New York Post and had a column at Esquire. According to an interview with The New York Times from 2007, Ephron's success came after Newsweek "told me flat-out that they didn’t have women writers."

The series is based on the true story detailed in the nonfiction book The Good Girls Revolt: How the Women of Newsweek Sued their Bosses and Changed the Workplace by Lynn Povich. Bustle reached out to Newsweek for comment on the original lawsuit and the show portraying it now, but has not yet heard back. The lawsuit, in which women in the '70s at Newsweek sued their employer for breaking existing equal opportunity employment laws at the time, resulted in a settlement in which Newsweek agreed to provide equal employment opportunities to women.

Ephron went on to journalism fame, and also inconsequentially married a famous journalist — Carl Bernstein, who along with Bob Woodward broke the Watergate scandal. According to that same NYT interview, she figured out and told people the identity of Deep Throat for years, but nobody believed her. Not even her own children!

In the Good Girls Revolt pilot, Ephron quits her job at News Of The Week shortly after being hired so that she can work somewhere that will let her write, which sparks a "revolt" so to speak in the rest of the female staff. So, that sounds like a dramatic interpretation of what happened at Newsweek, and the name of the fictional magazine seems to make that clear. She then goes to the Post on the Amazon series, just like what happened in real life.

It'll be interesting to see if Woodward and Bernstein show up, or if Ephron starts to show an interest in film. For now, the focus of Good Girls Revolt seems to be her impact on the other writers at News Of The Week. The fact that this series has such a direct basis in the truth makes it even more inspiring.

More like this
UK Viewers Will Have To Wait To Watch The Handmaid’s Tale S5
By Maxine Harrison
'Grey's Anatomy's New Intern Got Advice From Dr. Bailey Herself
By Grace Wehniainen
Paul Mescal, Man Of Mystery
By Samantha Leach and Heather Hazzan
The 'Reasonable Doubt' Cast Includes A 'Save The Last Dance' Reunion
By Grace Wehniainen
Get Even More From Bustle — Sign Up For The Newsletter