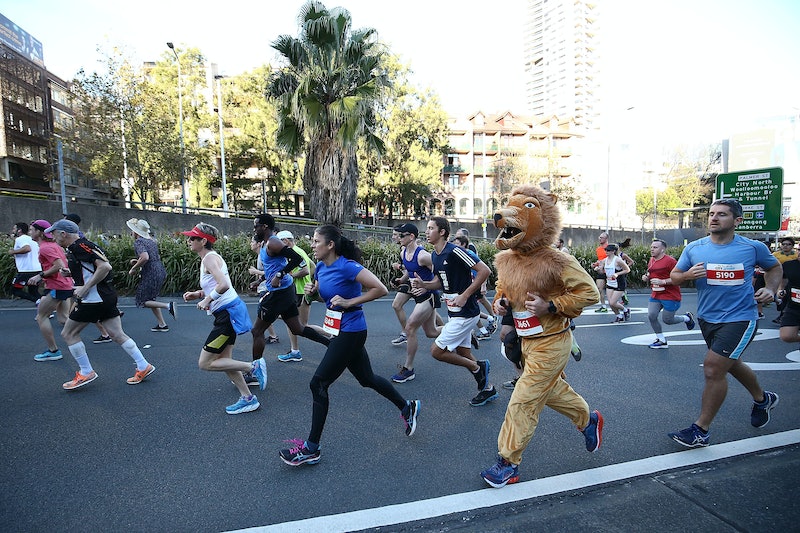 About 10 years ago, I laced up a pair of old tennis shoes, slapped on a pair of shorts, and walked out of my dorm, resolving that I would attempt to run just one mile. Within one minute, I was racing over the dark Chicago pavement. Within five minutes, I gave up. That day, I was convinced: I was not a runner, nor would I ever be.

Two years later, however, I was convinced by a friend to join her on a quarter-mile run. (I only consented, knowing the destination was Wendy's, where I could indulge in a Frosty.) And two years after that, having moved to New York City, I decided to infuse my pizza-and-ramen diet with a little healthy jogging, just three circles around Tompkins Square Park. Eventually, those three circles turned into four and six, and, once eight loops around a tiny park proved to be boring, I moved my running operations to the glorious and spacious West Side Highway, where I jog on a nearly daily basis.

Since I can hardly break a nine-minute pace, I still have trouble identifying myself as a runner, as much as I would love to — after all, the running community is made up of people with not only admirable dedication and overwhelming kindness, but also killer calves. (I've got the former nailed... the other two? Still working on 'em.) But, having completed two half marathons, I no longer roll my eyes while watching a group of people just running, like I did a decade ago.

Now that I'm one of those people, I understand. And I've come to understand — while sweating through heat, rain, and snow just to get a run in — that there's a lot more to learn about running than just how to train. Like...

This Is the Worst Feeling In the World

It's difficult to sprint out of bed knowing sprints are in your very near future.

This Is the Best Feeling In the World

But knowing you're at least one mile more productive than the still-sleeping rest of the world? Worth it.

Squats Are a Necessary Evil

Oh, you say you wanted to be able to bend your knees again one day without collapsing, powerless on the ground? Sorry.

These Are Just Evil

I'll tell you anything! Everything! Just keep the foam roller away!

Everything Is Easier After Three Miles

Just hang in there 30 short minutes, and you'll be ready to go to anywhere.

This season's collection brought to you by KT.

Which Leads to Fashion Pains

Between these and bikini tan lines, good luck wearing a dress again ever.

These Changed Your Life

An adorable distraction, until...

Death to all leash extenders.

Bikers Are the Montagues to Runners' Capulets

Wherefore art they? In whatever lane they want to be, yelling at you. We all live in the same place, so can we just get along?

No One in IT Can Help You With Your IT Band

But it does burn as much as Nick Burns' burns.

This Is How You Feel Going Downhill

On top of the world, ma!

How far the mighty have fallen.

This Is Not the Worst Part About Running In the Heat

And, yes, water weight does tip the scales at the laundromat. That will be an extra five dollars for being disgusting, please!

Even more disgusting? Realizing you've sweat enough to completely destroy your headphones. A drop in the toilet didn't even do them as much damage.

This Is Not the Worst Part About Running In the Cold

Hey, even penguins have trouble doing the same thing.

Does it seem like people are looking at you weird after your outdoor winter run? They are.

Actually, This Is. Of Everything

And experience the happiest of hours, completely unconscious.

22. A Good Running Jacket Will Wipe Away Your Winter Blues

Well, maybe you should just stick to a simple Brooks.

And you don't even mind that too many layers leave you burning like a (spring) fever. (After a long winter, does anyone remember how to dress for warm weather?)

24. Everyone Around You Is More Attractive Than You

Eat your heart out, OK Cupid.

25. Hydrating While Running Is Important

Creativity, clearly, is a bonus.

26. Hydrating While Running Is Impossible

Nothing hurts your time quite like accidentally waterboarding yourself.

Dog, horse, bird, please god tell me that's not human — you never know what you're gonna get, as Forrest would say.

28. But When In Doubt, Consult Kelly

29. This Is How You Feel 10 Minutes After Your First Race

30. This Is How You Feel 10 Hours After Your First Race

...there will always be a woman pushing a stroller that's running faster than you. But it's easier to not feel defeated when you realize they come courtesy of a dose of much-needed inspiration.

32. You'll Walk Away From Each Run With More Confidence

33. No Matter How Ridiculous You Look

34. You'll Also Walk Away From Each Run With More Chafing Scars

Ah, Aquaphor, nectar of the gods.

35. All Your Friends Will Ask You Why You Put Up With It

Especially after you continually ditch Friday nights to prepare for training runs.

And This Is Precisely Why

Because runners are some of the most charitable, loyal, and admirable athletes on earth. The race to become one is a marathon, but training to become a fit and good human being is more than worth it.

More like this
9 Unmissable Moments To Relive From The Commonwealth Games
By El Hunt
The 5 Best Anti-Chafing Sticks
By Lauren Moison
25 Things I've Reduced My Life To, In Addition To WFH In My PJs
By Ginny Hogan
Scotland's First Period Dignity Officer Has Sparked Backlash
By Darshita Goyal
Get Even More From Bustle — Sign Up For The Newsletter