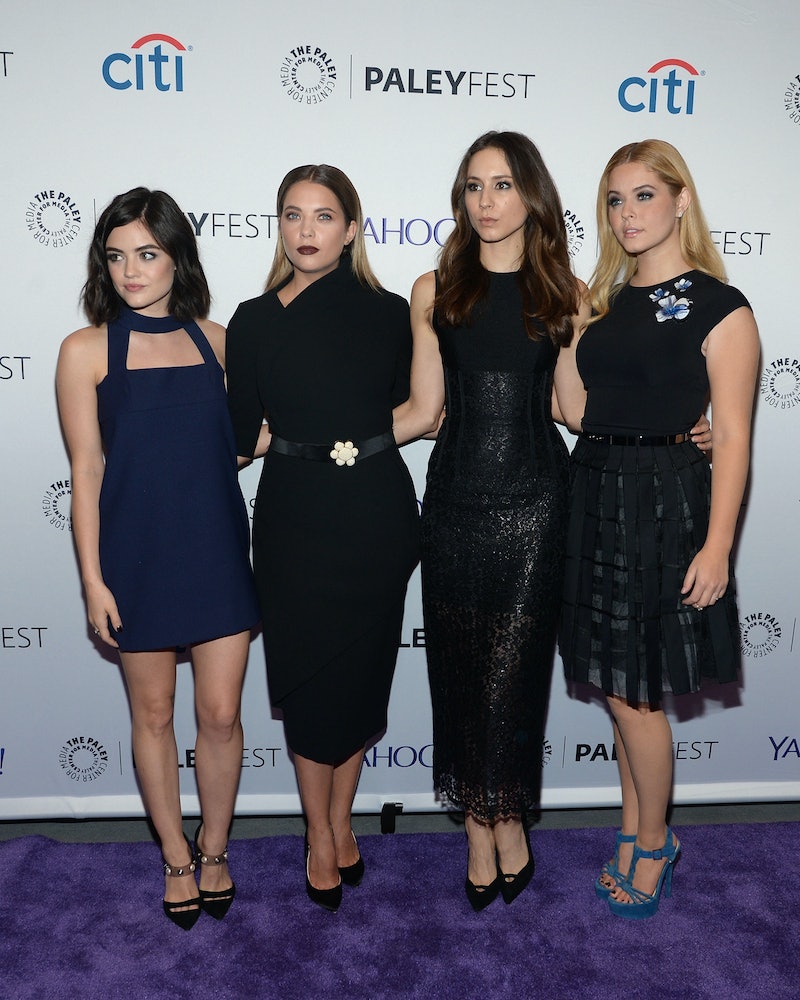 Now, that's how your commemorate the end of something significant in your life. Pretty Little Liars is ending, after seven seasons that saw the series penetrate pop culture and made stars out of Lucy Hale and Ashley Benson. The Pretty Little Liars cast got matching finger tattoos to celebrate the cessation of the show, which was a career gamechanger for so many involved. The tattoos are of the initials of their characters on their "Shh" fingers, which is AKA the pointer finger or the second finger on your hand, marking the significance of secrets on the show. The inkings are delicate, tiny, easy-to-conceal, cute, and forever mark a time and a place. But are the Pretty Little Liars cast tattoos real?

They certainly seem to be and why wouldn't they be? It's a special show that means a lot to both the actors and the fans. Not only do the petite tattoos look real, but Hale posted the shot on her Instagram and tagged Shamrock Social Club, a tattoo parlor favored by celebs. It's a Hollywood hotspot when it comes to ink. Hale also captioned the shot by writing, "We couldn't not get tattoos to commemorate the show! And obviously on our 'shh' finger."

There is no reason to think these tattoos aren't real! Observe the newly-inked fingers below.

Every initial has a period after it. And I love seeing all the cast's manicures and nail colors, showing off their unique styles.

Of course, the PLL faithful reacted to the inkings on Twitter. The sweet gesture made fans even further sad about the end of an era.

So many emotions rising to the surface.

It really is a lovely and permanent gesture that connects them all for life.

The passion of PLL fans is entirely palpable. Clearly, the cast shares that depth of feeling. How about we all get excited about the reruns, potential commemorative DVDs, and the eventual Netflix reboot? Because there is a possibility of all those things actually happening.

The PLL cast also hass matching rings because this tight knit crew is clearly connected by their digits.

More like this
10 Famous People You Forgot Guest-Starred In The Original 'PLL'
By Brad Witter
Most Comfortable Underwear For Big Butts
By Audrey Williams
Every Horror Movie Reference In The 'PLL: Original Sin' Premiere
By Alyssa Lapid
Where Is The Original 'Pretty Little Liars' Cast Now? Lucy Hale & Others Support The HBO Max Spin-Off
By Alyssa Lapid
Get Even More From Bustle — Sign Up For The Newsletter