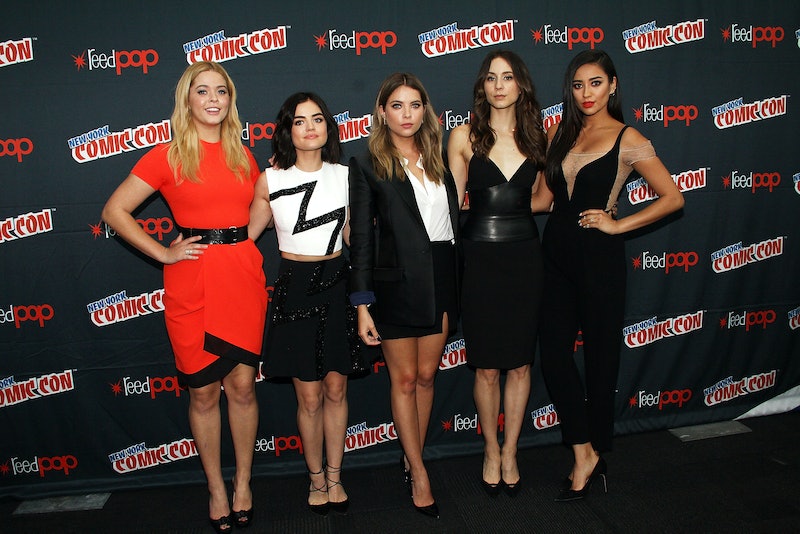 The best way to permanently remember something meaningful that is fixed in time is with a tattoo! Pretty Little Liars is ending after seven seasons, leaving devastated PLL fans in its wake. The Pretty Little Liars cast got matching finger tattoos to mark the occasion and to celebrate the show, which was a career gamechanger for series stars Lucy Hale and Ashley Benson, as well as Shay Mitchell. Both Hale and Benson posted shots of the finger ink on Instagram. What are the PLL cast matching tattoos?

The PLL cast finger tattoos are delicate, tiny, easy-to-conceal, cute, and will always remind each actor of their role. PLL is a special show that means a lot to both the actors and the fans.

Hale tagged Hollywood ink hotspot Shamrock Social Club, a tattoo parlor frequented by tons of celebs, in her Insta post. Her caption says it all and says it best: "We couldn't not get tattoos to commemorate the show! And obviously on our 'shh' finger."

Every initial has a period after it.

As expected, the PLL faithful reacted to the fresh cast ink on Twitter. This sweet gesture among colleagues and friends made fans even further sad about the end of the series and of an era.

Here's a sampling of those reactions.

All of the feels. All of them.

Interesting how that works, right?

The cast's commitment to one another really affected the fans and inspired a lot of emojis.

It really is a lovely and permanent gesture that connects them all for life.

The passion of PLL fans is so powerful. You can feel it in every character of these tweets. Clearly, the show has just as deep of a meaning for its castmates.

Want to know my remedy for feeling a little bit better about the end of PLL in the here and now? Bring on the reruns, the commemorative DVDs, and the eventual Netflix reboot. If only the TV gods could be so kind...

Oh, and did you see this? The cast also has matching rings. It's so unique... the way the PLL squad remains connected by their hands in this snap.