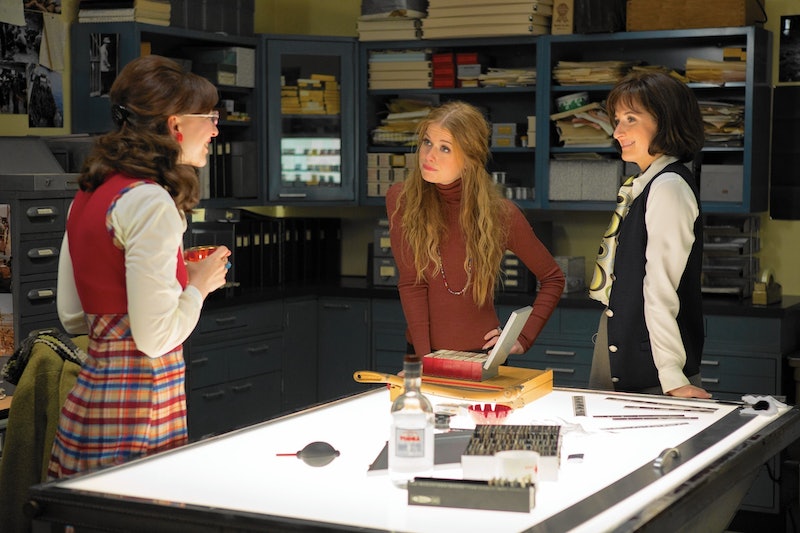 When I was a freshman in college, I picked up a copy of the campus newspaper, looked at the editor-in-chief's name on the masthead, and told my roommate, "Someday, that's going to be me." Two years later, it was. I never doubted that my drive and passion for writing would take me where I wanted to go, but something I took for granted was the fact that hard work would largely be enough to get me there. It wasn't until I watched Amazon Studios' new series Good Girls Revolt that I fully realized that just a few decades ago, women in media couldn't rely on talent and hard work to achieve their goals. And now, I want to thank the women from Newsweek whom Good Girls Revolt is based on for paving the way for me to be a journalist.

Though the Amazon series takes place at a fictional magazine called News of the Week with fictional distrguntled female employees, the story behind the show is all too real. According to Newsweek, in 1970, 46 female employees of the magazine sued the company for alleged gender discrimination. The women's lawsuit claimed that they were relegated to jobs like researcher, doing much of the work for their male counterparts, but getting none of the credit on the final article. (Bustle reached out to Newsweek for comment on the original lawsuit and the show portraying it now, but has not yet heard back.) The lawsuit resulted in a settlement in which Newsweek agreed to provide equal employment opportunities to women.

There are days I take that for granted. Of course I have a good job doing what I love — I worked hard for it. But Good Girls Revolt reminded me that it can take so much more than that.

Perhaps it was naive for me to believe that I could be anything I wanted when I was growing up. As I got older, I did realize that women still have a long way to go in terms of workplace equality (starting with the simple fact that we don't receive equal pay to men for doing the same jobs) and that they continue to face many barriers in all fields, but thanks to those 46 intrepid women and others of their generation who fought to be taken seriously, media has increasingly become a women-occupied space. That may not have happened when it did if not for Newsweek's employees being brave enough to file the first female class action lawsuit, and the first by women journalists, according to Lynn Povich's memoir, also titled Good Girls Revolt, which chronicles her journey at the magazine during that time.

Today I work at Bustle, a company filled with female editors who create and edit articles written with women in mind. I get to be a voice for other women like me in a way that likely would've been impossible 50 years ago. There are days I take that for granted. Of course I have a good job doing what I love — I worked hard for it. But Good Girls Revolt reminded me that it can take so much more than that.

As the series shows, at the time of the lawsuit, a woman could have been the best writer in the building, but would still be relegated to helping a man get another byline. Those Newsweek women fought so that one day I could have my dream career — the one that I've wanted since I was 9 years old and wrote the first edition of The Sunday Sorren, a handwritten newspaper chronicling the events of my house for my parents.

From there, I grew to writing columns about my favorite basketball team for my dad before each game. I used to splice sections of my articles in with the real sports coverage and read my dad the paper to see if he could guess which parts were mine. I still remember the name of my favorite basketball columnist, Paola Boivin, who continues to work at The Arizona Republic as one of the handful of women who makes her mark in the male-dominated sports section (another example of the work that still needs to be done).

In high school, I shifted away from my earlier dream of becoming a sports reporter and found a passion for editing instead. I ran the yearbook for two years and spearheaded the effort to re-instate our newspaper. I held meetings, assigned stories, edited articles, and, when writers failed to turn pieces in on time, wrote four of the articles myself so as not to miss the publishing deadline.

Then, I was in college, knowing I had the ability to someday run that paper, too. That name I had pointed to on the masthead early in my college career? Colleen Stufflebeem, who's now a producer at CNN. Back then, she simply represented my next goal — editor of my college publication. The fact that the newspaper had a female editor-in-chief didn't really stick out to me, because I'd never questioned why a woman wouldn't have that role. But Good Girls Revolt opened my eyes to what a great feat that really was. If I'd been born a few decades earlier, I couldn't have accomplished many of the things I have, or seen the goals I still have as within my reach. Those Newsweek women made it possible for "good girls" like me to grow up wanting to be reporters and editors, and to then actually take the steps to make it happen.

Often when people argue about the importance of showing women in a variety of roles on television shows and in movies, they cite the important message used by the Geena Davis campaign: "If she can't see it, she can't be it." But in the case of Good Girls Revolt, that's not what makes the show so significant. In fact, it's almost the opposite. I don't see much of myself in Patti or Cindy or Jane on the Amazon series, because the real women behind those characters fought for me to never have to go through what they did.

They fought for me to have inspirations like sports columnist Paola Boivin and CNN producer Colleen Stufflebeem — women who worked hard to do what they love in an industry now filled with female role models whose bylines are proudly published with their work. But after watching Good Girls Revolt, I'm adding those 46 Newsweek women to my list of role models so I always remember who helped make it possible for me to achieve my own dreams.