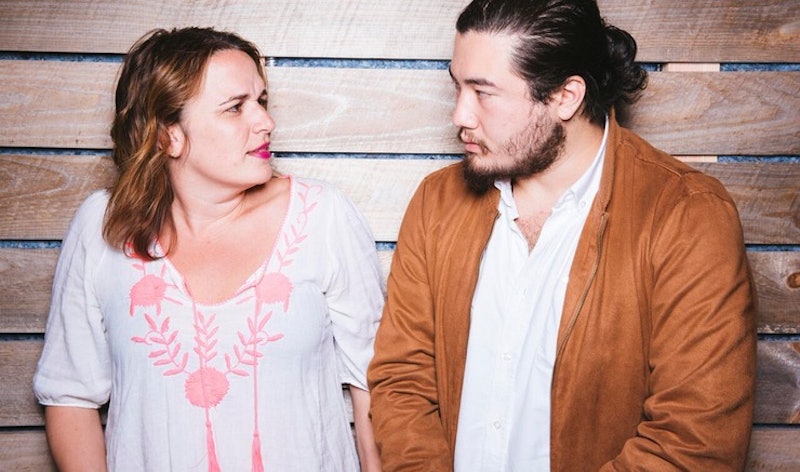 In this charged political climate, chances are you'll end up in an argument with somebody about a) Trump versus Clinton, b) racially insensitive Halloween costumes, or c) the issues debated during this election, including abortion. I can't help you right now with the first two, but I've got your back on the last one. It can be difficult to remember statistics while balancing a beer and a gloved hand with claws stuck on it, but this will help you argue effectively with some of the most common ways in which people try to deny the importance of abortion access.

Some of the arguments against abortion you might encounter are pretty easy to rebut. (To some dude in a Ryan Lochte costume saying that his ex-girlfriend had an abortion and was really upset about it afterwards: That isn't a valid argument, dude.) Others may be more nuanced. (Anybody who says that abortion is dangerous to the mother can just be directed to Marie Stopes' informative website, where the extremely low risks of surgical and nonsurgical abortions are laid out in great detail for their perusal.) Some, though, may be more difficult to combat off the top of your head, which is where this guide comes in.

This handy-dandy guide for arguing pro-choice is also useful for other situations, like dates, family reunions, Thanksgiving, Hanukkah, and after-work drinks. Have it saved on your phone for easy access to statistics! Think up witty ways to make the points your own! And don't be upset if you don't change anybody's mind. Sometimes, you can only add your voice to the conversation.

Argument: "It Creates An Easy Way Out"

How The Argument Works: It's a point of particular shame to me that my own prime minister, the Australian Tony Abbott, said in 2004 that "Abortion is the easy way out. It’s hardly surprising that people should choose the most convenient exit from awkward situations.” That's the prevailing thinking behind this argument: that abortion creates a way to escape responsibility for one's actions, and converts the serious matter of pregnancy into a disposable problem with no repercussions.

How To Dispute It: This is actually contradicting other pro-life arguments, which argue that abortion is highly traumatic and difficult for the woman's psyche and body. But this argument is also fundamentally predicated on the idea that abortion is in any way "easy" to access, comprehend, pay for, and deal with physically.

The reality is that every woman's experience is different. There are those who find the experience unproblematic, and there are those who face serious challenges at various points in the process, from the choice to have the abortion to finding supportive people during and after the procedure. Abortion, whether it's done via a pill or with a surgical procedure, is not regarded flippantly, or as a way to avoid more complicated responsibilities. It is, in and of itself, often a complicated and heavy responsibility. Anybody who doubts that should check out the archives of the #shoutyourabortion hashtag on Twitter, which encompassed the vast breadth of reactions experienced by real women who've had the procedure.

How The Argument Works: The basic structure of this argument is that access to abortion makes girls and women more sexually active, which is a bad thing, and therefore abortion access is itself a bad thing.

A pretty heinous letter from a doctor published in the British Medical Journal in 1975 sums up this attitude. It argued against abortion for teenagers because "the knowledge that they can attain an abortion on demand and be issued with contraceptives is a great comfort to these promiscuous girls, who are grateful they will not have to interrupt their sexual activities for long... A pregnancy, though undesirable, at least keeps these girls away from their sexual activities for 30-40 weeks, perhaps longer. To put it crudely, they have had their belly full of sex and steer clear of it."

How To Dispute It: This disavowal of abortion is largely rooted in the notion that female sexuality is somehow corrupting and dangerous. The notion of the only acceptable female as either virginal or sexually submissive to her husband isn't just outdated; it's rampantly unrealistic and anti-feminist. The first step to dismantling this argument is targeting the assumption that "promiscuity" is itself a bad thing. If abortion does create a space in which women are more willing to have sex (and I'm not conceding that it does, necessarily), why is that a bad thing?

If the argument uses "risky behavior" instead of "promiscuity," it makes more sense, but only marginally. The idea that abortion automatically opens the floodgates for people to have unprotected sex because they can "sort it out later" involves a drastic misunderstanding of both how seriously women take abortions and of the status of abortion in birth control. Abortion is the last, not the first, line of defense.

There are also various conflicting bits of evidence about whether STDs, for example, do actually correlate with abortion access. A famous study found that STDs rose nationally after Roe v. Wade, but another found that gonorrhea in particular fell. Abortion, of course, can do absolutely nothing to prevent STDs in and of itself. If that study is right, its findings are the result of decisions to avoid contraception which prevents STDs as well as pregnancy (condoms, for instance), which is traceable to a lack of understanding about how contraception works.

If you want to look at another possible proof of "promiscuity," teen pregnancy, you'll also be disappointed. In the U.S., both teen pregnancy and teen abortion rates reached record lows in 2011, according to studies by the Guttmacher Institute, though the specific statistical declines differ between states and races. Across all categories, though, both are getting rarer. The U.S. continues to lead the world in teen pregnancy (with 59 out of every 1,000 girls aged 15-19 experiencing a pregnancy in 2010) among all countries with liberal abortion laws, but abortion itself clearly isn't behind this. Switzerland, which widened its abortion laws in 2002, has the lowest rate, at 8 out of every 1,000 girls. Experts point to a combination of "education, contraception and socioeconomic level" as the secret in this regard.

Argument: "It's Used As A Contraceptive Alternative"

How The Argument Works: This is one of the arguments which paint women who get abortions as selfish and uncaring -- that instead of using contraceptive methods to prevent conception, like condoms, the pill, or IUDs, they'd prefer to have unprotected sex and then use abortion to "deal with it" as an alternative.

How To Dispute It: A study done on 18-to-35-year-olds in NYC in 2006 found that "poor couple communication, lack of planning, lack of acceptable contraceptive methods and the pleasures that people associate with having unprotected sex result in the perception that some individuals rely on abortion over contraception to prevent unintended births." In other words, abortion as a contraceptive technique was the product of a collection of f*ck-ups and misconceptions, rather than a widespread practice.

The majority of the respondents also believed abortion was not an effective replacement for contraception and that multiple abortions could possibly be harmful, discouraging them from using it as their first contraceptive method. Studies have also found that 51 percent of all women who've had abortions have used birth control in the previous month, and that many of the remainder believed they were at "low risk" for pregnancy. And 52 percent of women who have abortions have had none previously; you'd think that if it were being used as a contraceptive, multiple ones would be more common.

Argument: "Every Baby Can Be A Blessing For Somebody's Family"

How The Argument Works: The thought that adoption is always preferable to abortion seems reasonable on its face. If there are many people in a country who desperately want a baby, isn't it a better idea to carry a child to term and then give it up to those who want it, rather than aborting it?

How To Dispute It: Unfortunately, this is a rather idealized view of the world. In 2015, there were 107,918 children in foster care in America awaiting adoption, at an average age of seven. The process of adopting a child, whether from the foster system or privately, is expensive, laborious, and not for the fainthearted. It's also not a fair or just system all the time, with a 2010 study showing that babies of African-American descent are less likely to be adopted by American families.

Choosing to keep a baby just for the duration of a pregnancy can also be a burden. Beyond the physical tolls of pregnancy, paying for prenatal care and facing disruptions in education and work can prove to be significant problems for birth mothers. It's also not the psychologically easy way out. Randie Bencannan, writing for Rewire, compares two statistics: 75 percent of birth mothers still felt loss 12-20 years after their newborns were placed with new families, while 90 percent of women given a near-limit abortion reported feeling relief a week afterwards (41 percent also felt regret, which is unsurprising, as it's a complicated and serious decision).

How The Argument Works: The BBC points out that this argument actually originated with some feminist thinkers, who claimed that abortion is actually constructed to maintain male access to women in a sexual context. "Abortion on demand is vital if men are to be able to have women on demand, and thus men are arguing for abortion so that they can continue to exploit women." In other words, pregnancy prevents heterosexual dudes from getting their rocks off, so abortion is a method of control.

How To Dispute It: The biggest response to this is that women are indisputably in charge of the decision to have an abortion the vast majority of the time. The Guttmacher Institute surveyed 1,209 patients at American abortion providers, with in-depth interviews with 38 women, to provide a comprehensive overview of the reasons women sought abortions. "The reasons most frequently cited," the study noted, "were that having a child would interfere with a woman's education, work or ability to care for dependents (74 percent); that she could not afford a baby now (73 percent); and that she did not want to be a single mother or was having relationship problems (48 percent)." Fewer than one percent of the respondents said they were doing it because their partner or their parents wanted them to.

Jessica Valenti also points out that there's an insidious aspect of male control that this argument doesn't consider: forced pregnancy, or "reproductive coercion" when focused toward starting or maintaining a pregnancy. The National Coalition Against Domestic Violence explains that "women experiencing reproductive coercion by their intimate partners have an increased risk of sexually transmitted infections and unintended pregnancy as a result of pregnancy pressure and birth control sabotage." If it's male control we're worried about, female access to abortion and contraception should be made easier, not harder.