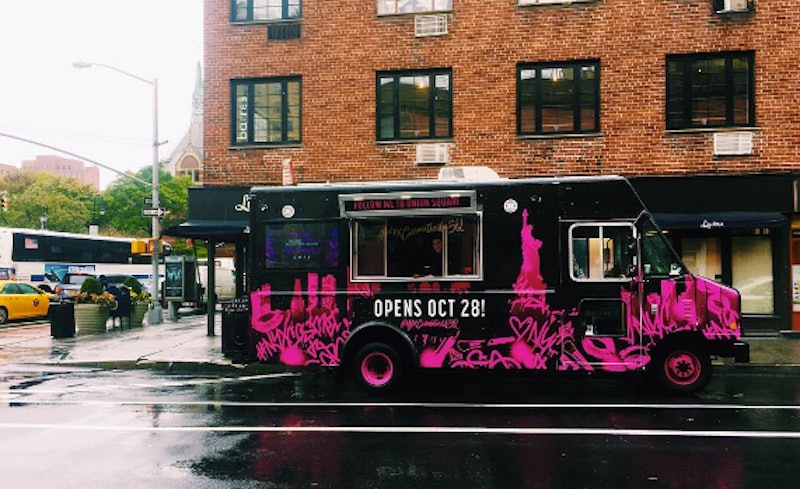 Up until now, the best place to snag NYX Cosmetics' products was online or at your local drugstore. Well, that's all about to change. Starting Oct. 28, you'll be able to hit the official store to stock up on all the beauty products that you need. Where is the NYX Cosmetics' flagship store? It won't surprise you which city the store chose as their go-to location.

If you thought NYX holiday launches were the best thing to come this season, then think again. The company is opening their biggest ever NYX-only store in New York City, and you're going to want to plan your trip there as soon as you see the sneak peeks. This will be the only store that specifically sells the brand besides their online site. Basically, this is pretty big news.

The store will be located in Union Square. From the sneak peeks, they seem to be keeping to their black and white theme and not holiding anything back. They've even been driving around a pink and black bus and handing out free products to the people of NYC. No photos of the inside has been shown yet, but I'm willing to bet it's as gorgeous as the storefront.

Just in case you're unfamiliar with the term "flagship", let me break it down for you. It means that this will be the company's biggest store. Hopefully it also means that there are stores coming all around the country as well.

According to social media, the store is having a Halloween party on Oct. 28 to celebrate the store opening. I can't wait to see what else the store has planned for their biggest store opening yet.

If you're not able to get to New York City to visit their store, there's still a way to get your hands on the products. They have a store locator on their site, which shows exactly where you can shop in-store.