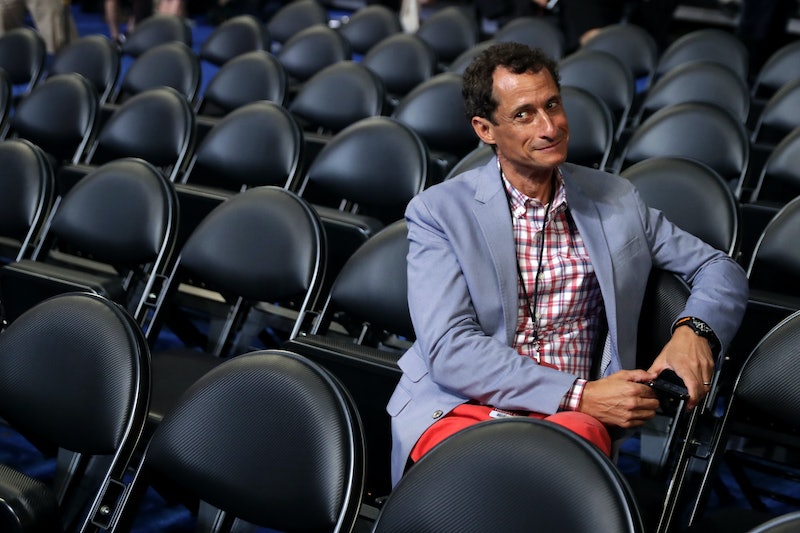 News that the FBI was opening a new inquiry into Democratic nominee Hillary Clinton's private email server Friday was trumped only by news officials had uncovered additional emails while investigating Anthony Weiner's sexting habits. Federal authorities are investigating reports that Weiner allegedly sexted a 15-year-old girl from North Carolina. While the disgraced former congressman's penchant for sexting has always made him the butt of a few jokes, Weiner could face serious charges for his latest transgression.

A federal grand jury is expected to convene sometime late this month to determine if charges should be pressed against Weiner for allegedly sexting a minor. According to the Daily Mail, Weiner's months-long online relationship with the minor went beyond exchanging sexually explicit messages and crotch shots. Weiner allegedly shared pornographic videos with the underage girl, reportedly asked her to dress as a "school-girl" on a video messaging app, and allegedly encouraged her to engage in "rape fantasies" with him.

Although Weiner admitted to sending what he called "flirtatious" messages to the unnamed teenager, he would not speak to the other allegations the minor had made against him. Weiner also sent the Daily Mail two emails written by the girl that he claimed indicated he "could have been the subject of a hoax."

While it's still unclear if Weiner will face charges at all or whether prosecutors will try the case in a federal or local court, the former congressman could face jail time either way. Northwestern University law professor Deborah Tuerkheimer told Slate that Weiner could face two charges of non-violent felonies with sentences of up to seven years probation — promoting the sexual performance of a child and disseminating indecent material to minors.

According to Tuerkheimer, Weiner could also be charged with endangering the welfare of a child, a misdemeanor with a maximum sentence of one year in prison. If the case is tried in a federal court, Weiner could reportedly be charged with sexual exploitation of children and face anywhere from 15 to 30 years in prison, Temple University law professor Barbara Ashcroft told Slate.

Although recent reports of Weiner's sexting habits may be the most cringe-worthy, the scandal certainly is not the former congressman's first involving sexting. Weiner was forced to resign from his seat in the House of Representatives in June 2011 after it was revealed he had sent a sexually suggestive photo to a 21-year-old woman on Twitter. Although Weiner denied early reports of the message, he later admitted to having sent explicit photos and messages to multiple women both before and during his marriage to longtime Clinton aide Huma Abedin.

The disgraced congressman was caught up in a second sexting scandal in July 2013 when sexual messages and photos he'd sent to a woman under the name "Carlos Danger" leaked during his campaign for mayor of New York City. In an attempt to salvage his campaign, Weiner admitted to having sexted six to 10 women in his life, with three of the exchanges taking place in the two years since he'd resigned from Congress.

In August, the New York Post revealed Weiner had been exchanging suggestive messages and photos with a "40-something divorcee" while working as a stay-at-home dad. In one picture Weiner allegedly sent to the woman, both his crotch and his son are visible. Aberdin announced her separation from Weiner shortly after this batch of sext messages went public.