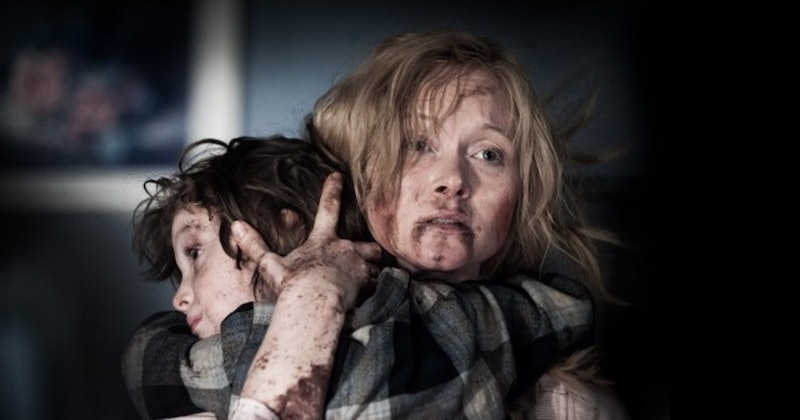 Women have been featured in prominent horror movie roles since the genre was born. From scream queens to final girls, women and horror movies have always had an uneasy alliance. Often women's bodies become objects of horror themselves (see the works of David Cronenberg) and other times women are punished for being sexual or rewarded for being virginal. The ideas of purity, fragility, and subversiveness that Hollywood has attached to women pair perfectly with the psychological fears driving horror. Because women and the horror genre have such a rich, complicated history, there are certain female-centric horror movies everyone should see at least once.

As much as the horror genre can tear women down, it can also build them up. From the depictions of the final girls who live to fight another day to the deep dives into the fear women have over the loss of identity, motherhood, friendship, and sexuality, the movies on this list are all important — even though some are more recognizable than others. The horror genre is even more problematic than most, but each one of these films are standouts. If you are ready to dive into the world of women-led horror movies then let this list be your guide.

Maybe turn a few lights on before you delve in too deep, though.

Paranoia, the loss of control of your body, the fear that the person closest to you could be a complete stranger — Rosemary's Baby stirs all of these anxieties in a simmering pot of horror and adds a Satanic cult for good measure.

This low budget masterpiece sends a woman named Mary on a queasy journey after a near death experience. Life, death, and a place of limbo in between all taunt Mary as she wonders if her sanity is eroding in this cult classic.

Ripley is so much more than a final girl, she is a certified heroine, and while she may kick more butt in Aliens, skipping over her origin story would be a huge mistake.

Whether you watch The Babadook and see a terrifying metaphor for depression or simply a mother struggling to fight off the darkest of monsters before it consumes her and her son, this movie is a modern masterpiece. It also happens to be the rare horror movie with a female lead, director, and writer.

Jamie Lee Curtis is the original scream queen. You may not like all the ideas Halloween is peddling, but there is no denying Laurie Strode holds her own against the maniac that is Michael Myers.

In 1996, Scream came along to completely deconstruct the slasher genre Halloween pioneered and it did it with a heroine who was more than capable of saving herself.

With the second wave feminist movement leading to major social changes in the '70s, the unassuming Carrie came along to illustrate the sheer extent of the power and rage men feared every woman not only possessed, but were not afraid to wield.

A sexually transmitted haunting introduces the world to a teenage horror movie lead who does her share of screaming, but also uses her wits and strong friendships to survive.

An all female cast makes The Descent a standout in the genre. As much as the story is about monsters, it is also about the fragility of friendship and how secrets can tear people apart.

After being hit with a nasty curse, a mild mannered loan officer realizes there is nothing she won't do if it will ensure her survival in this twisted horror comedy from Sam Raimi.

This underrated movie has a female protagonist and villain, and it also serves as a handy metaphor for the dangers of staying in a toxic friendship.

Based on The Turn of the Screw, The Innocents is a haunting, psychological story of a woman whose faith may push her past the point of sanity. Or she could be haunted by ghosts. It's up to you to decide.

Before Buffy there was Reggie, the zombie killing, snarky heroine the '80s needed.

There is nothing scarier than a murderous child except maybe being the mother of one.

Cliques are one of the most frightening things girls encounter in high school, and The Craft just expounds on an already scary reality with a dash of witchcraft.

A getaway to meet the parents turns brutal in this genius slasher film that pits its heroine against a group of masked home invaders.

This slow burn movie is worth your time for its amazing, down to earth lead who just wanted to find some ghosts in the creepy hotel where she worked before the place was shut down.

If you have only ever seen Audrey Hepburn in romcoms before then prepare to be blown away by her performance as a blind woman who is left to fight off home invaders on her own.

The feminism is strong with this one. Centering around two teen sisters, periods, and power, this movie completely changes the werewolf movie game.

A repressed teenager, a wood witch, and some majorly creepy 1630s traditions make The Witch a must watch feminist horror movie.

Nicole Kidman is brilliant in The Others, but her performance is just part of the appeal. The atmosphere in this movie is off the charts spooky and the story is exquisitely crafted from start to finish.

Gothic horror, Alfred Hitchcock, and Joan Fontaine collide to produce one of the greatest psychological mysteries of all time.

The very prospect of marriage terrifies some people. If you are one of those people, you need this movie in your life. Marriage really does change people sometimes, and often in the most unexpected of ways.

From the famous to the obscure, everyone should see these 23 female-led horror movies at least once.