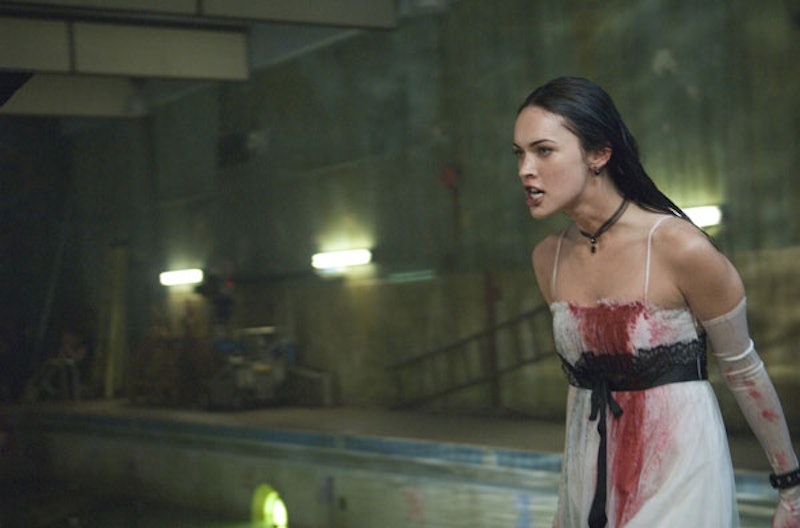 Watching horror movies can be a thankless task if you consider yourself a feminist, or just generally dislike seeing women and minority characters being fridged for having sex or simply being themselves (retire those tropes, horror writers!). There are feminist horror movies out there, though, and while I don't think any movie is perfectly feminist, there are enough spooky thrillers featuring kickass women to get you through October. When the urge to watch a Halloween movie strikes this season, reach for a quality tale that will keep you up at night and not make you feel gross for watching it.

A quick disclaimer, because these are horror movies, bad things do happen to the female characters (and everyone else) and some of them don't make it out alive. Rest assured though, that while they are breathing, they are acting with agency, subverting genre tropes, and saving the day. They are also interacting with other women, because I have a special place in my heart for horror movies that focus on female relationships. From final girls to intrepid explorers who wander too far off the beaten path into the world of the supernatural, the female protagonists of the 11 movies on this list will make feminist horror movie fans proud.

There are many ways to interpret The Babadook, but for me it is about a woman struggling with depression and isolation. Director Jennifer Kent builds the creeping sensation of terror with every passing scene, and it's all I can do not to cover my eyes when the heroine Amelia faces the Babadook head on, knowing that if she can't conquer it, she and her son are lost. It's a powerful meditation on mental illness, motherhood, and the constant battle against the monsters in your head that will leave you sleeping with the lights on.

Marriage is a topic of discussion that often comes up when people are discussing what it means to be a feminist. What if the ideas of taking your husband's last name and a fear of losing yourself became actualized? That's what happens in Honeymoon starring Rose Leslie. I can't say too much, but if you have ever experienced even mild marriage panic then this story of one woman going through some, uh, changes post-marriage is sure to get under your skin.

Released right in the midst of the Second Wave feminist movement, Carrie is a product of its time. The titular hero is deeply repressed and sheltered thanks to her mother and the abuse of bullies at her school. When she discovers her power, it is too much for her to control, and all hell breaks loose. When watching Carrie is it important to remember the era it comes from in order to fully feel the effect its depiction of a woman exploding with anger and rage once had on the society watching it.

Six women go into a cave full of some seriously upsetting monsters, and a modern day horror classic is born. This movie is all about women: their friendships, their secrets, their fight for survival. It's a total gore-fest, but if you don't mind the blood, The Descent is a must-see.

Ripley is basically a flawless human being. She's a resilient, smart space explorer who becomes a survivor under extreme circumstances. While she is arguably far more heroic in Aliens, it's more of an action adventure film while Alien is a so-scary-it-will-make-you-pee-your-pants kind of movie.

When werewolves and a story grounded by two death-obsessed sisters meet, magical things happen. The story is driven by the strong bond between the sisters, but there's also some serious genre-bending going on as Ginger becomes more in touch with her sexuality. Strong female themes and a genuinely unique take on the werewolf lore make this one a winner.

Diablo Cody's follow-up to Juno is easily one of the most underrated horror movies of all time. It tackles body horror head on when Jennifer is used as a virgin sacrifice. The trouble is, she's not a virgin and the terror she reigns down on the boys in her high school when she comes back is impressive. There's a whole other story at play here as Jennifer's best friend Needy realizes not only that she has to stop Jennifer, but maybe Jennifer wasn't such a great friend after all. Great dialogue, a central story that comes down to two young women, and the subversion of the virgin sacrifice trope all add up to a truly awesome horror movie.

Sara is one of my all time favorite movie leads, horror or otherwise. She's an endlessly curious young woman who works in an inn that she believes is haunted. Rather than be freaked out by the idea, Sara wants to find evidence, and the more she finds, the more into investigating she gets. Meanwhile, her co-worker chickens out at the first hint that the ghosts might be real.

Because Sidney lives in a world where scary movies exist, she's totally savvy to the killers' tactics and she has no time for him. Her power is never in question throughout the movie and even losing her virginity doesn't do her in. As an added bonus, reporter Gale is also on hand to suffer no fools in her pursuit of a killer story.

Abigail Breslin is remarkable as a teenage girl, Lisa, who is the only member of her family who realizes they are stuck in a time loop. The more she begins to understand about her situation, the more apparent it becomes that Lisa is the only one who can stop the evil plaguing the house. Lisa becomes a hero who must grapple with some huge, life-altering choices in order to go up against something much darker than any one person should have to deal with.

Christine is such a nice girl... at least that's how she presents at the beginning of the movie when she declines to grant an extension on an elderly woman's loan at the beginning of the film. Being cursed changes a girl, though, and it is quickly shown that Christine will do anything to ensure her survival. Her transition from an "every girl" into an unrepentant survivor is epic.

I hope you will make your Halloween a feminist one with these awesome lady-centric horror tales. Each one is the perfect treat to go along with all that pumpkin-shaped candy you will no doubt be hoarding during October.