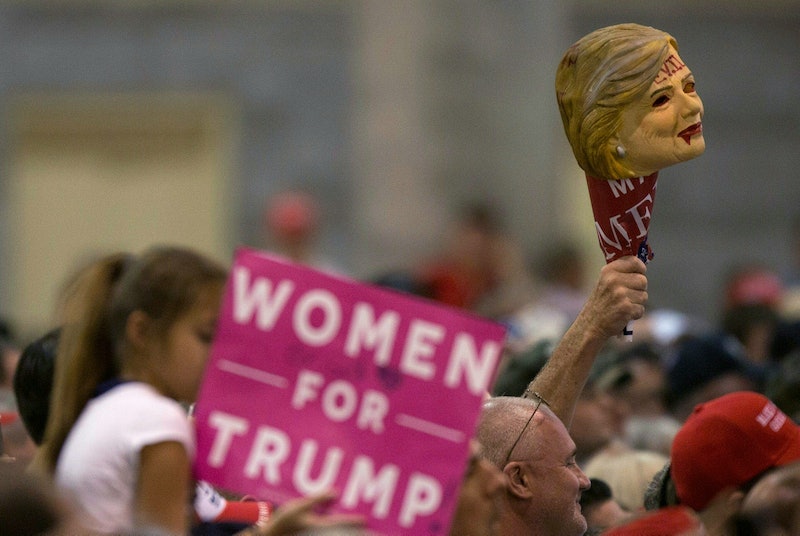 Over the course of the last 18 months Hillary Clinton has been called a lot of things — crooked, Shillary, Killary, nasty woman, and yes, even the devil. While name-calling isn't exactly a new thing in politics, Trump's taken the art of nasty political nicknames to a whole new level. For months he's referred to Clinton as "the devil," the most recent incident occurring Oct. 9 during the second presidential debate. But while most of us see Trump calling Clinton "the devil" as just another example of the GOP's inappropriate rhetoric, a shocking number of his supporters seem to have taken him at his word.

There's been a lot of bizarre elements to this year's presidential election, but perhaps none so bizarre as a poll from Public Policy Polling which asked 985 voters in Florida if they thought Clinton was actually a demon. Yes, you read that right. Voters were polled on whether or not "Clinton is an actual demon." It's a question that appears ripped straight from the Salem Witch Trials of the late 1600s. The only thing more surprising than the question itself, however, are its results.

I'd very much like to tell you this was the first time voters have been asked, in all seriousness, whether or not they thought Clinton had ties to hell, but it's not. It's not even the second time.

A July 30 Public Policy Polling survey of 1,276 voters nationwide found 18 percent of respondents believed Clinton "has ties to Lucifer" compared to 61 percent who felt she didn't and 21 percent who weren't sure. When responses to the question were broken down by political party, it was found that 33 percent of Trump supporters believed Clinton was in some way connected to the devil compared to 36 percent who didn't and 31 percent who were unsure. While 86 percent of Clinton supporters said they didn't believe Clinton had ties to Lucifer, 2 percent said they did and 12 percent said they weren't sure.

Trump is hardly the first man to link women to Satan. It's an inane connection that can be traced back to the Bible. But does the insult's historical precedent justify a polling firm including such a ludicrous and one-sided question in multiple voter surveys? I think not.