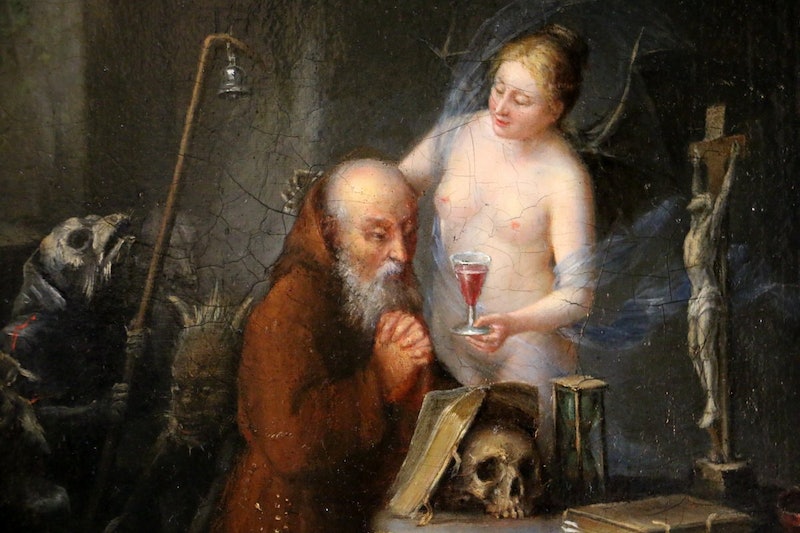 If you've been wading through the miasma of misery that is the 2016 presidential race, you may have picked out something very interesting from last night's debate: among all the other nastiness, Republican candidate Donald Trump referred to Democrat Hillary Clinton as "the devil." I'm not going to go into the logic by which he came to this bizarre conclusion, but we can conclude that Trump likely meant that she is "the worst of the worst," rather than the genuine devil of religious tradition. The really interesting thing about this, though, is that Trump's comment plays into an exceptionally long history, found in various human civilizations, of tying women explicitly to the devil whenever they've done something to displease a man (or just, you know, existed). It's one of the most enduring gender-focused insults in human history.

The thing that distinguishes Trump's remark is actually its particularity. The relationship between women and the devil in many cultural contexts has often been a matter of the entire gender, not just exceptional females who've happened to annoy men in power. That hasn't always been the case, and we'll see a few situations in which specific women were highlighted as demonic, sometimes for artistic effect (think of The Doors' "Woman Is A Devil") and sometimes to tragic effect (think of the executions and torture caused by the European and American witch trials).

The notion of targeting particular women as "the devil" also has a more pronounced modern history, and is characterized in pop culture as almost exclusively to professionals: think of Miranda Priestly as the titular devil in The Devil Wears Prada, or Sandra Bullock's high-end executive in The Proposal going by the nickname "Satan's Mistress." Before this, actually becoming the devil wasn't often a privilege reserved for women; we were much more likely to be thought of as having had sex with a demon. It's a long story. Shall we get into it?

1. First Centruy AD: All Women Are The Devil's Gateway

The attitude of the early Christian church towards women was not uniformly friendly, largely because Eve, the first woman, was regarded as the instigator of humankind's sin. Rather than being an isolated case, though, church thinkers tended to condemn the entire gender, alleging a close relationship with the demonic and ungodly due to that first slip with the serpent in the garden of Eden. One of the most fervent believers on the matter was the very early Christian author Tertullian, who lived and wrote in the first and second centuries AD. And he was pretty explicit about women being basically just a pathway for demons to come in and out of the world.

In his tract On The Apparel Of Women, he explained that women should dress extremely modestly because "woman is a temple built over a sewer, the gateway to the devil. Woman, you are the devil's doorway.... You should always go in mourning and in rags.... Do you know that each of your women is an Eve? The sentence of God, on this sex of yours, lives in this age; the guilt must necessarily live, too. You are the gate of Hell, you are the temptress of the forbidden tree; you are the first deserter of the divine law." Congratulations, everybody!

2. 8th-11th Century: Women Were Born Of The Six Devils

The notion of women as inherently demonic in nature isn't just a Judeo-Christian invention. You also find it in other areas, including specific sects of Buddhism called Shingon and Tendai, both of which reached their apex of power in the Heian dynasty, between the 800s and 1100s AD. According to a Shingon text quoted in From Eve To Dawn, A History Of Women In The World by Marilyn French, one of the key tenets of these Buddhist offshoots was the notion of women as born of devils:

"Woman was originally an agent of the six devils... born as woman to prevent men from following the ways of the Buddha... You must regard yourself as the agent of the devils sent to destroy the teachings of Buddhism." It adds, as if the point wasn't sufficiently made, "Woman is an emissary of hell; she destroys the seed of the Buddha."

The medieval idea of witches and their relationship with the Christian devil is actually more complicated than it first seems. The concept did not usually claim that the women in question were the devil, or possessed by him, but rather that they'd entered into some kind of relationship with him, usually sexual. Thinkers of the time regarded women as more likely to be targets of the devil's bargains, because they were "gullible, unsophisticated, easily controlled, and manipulated by the unscrupulous," with their "envy, pettiness and discontent" making them vulnerable to unholy influence.

There was another reason, though: women were regarded, in some medical thinking, to be exceptionally sexually hungry. "All witchcraft comes from carnal lust," wrote a source in the 15th century, "which is in women insatiable. There are three things that are never satisfied; yea, a fourth thing that says not, It is enough, that is the mouth of the womb... Wherefore for the sake of fulfilling their lust they consort even with the devil." All witch-like behaviour, including the granting of powers and meddling with the lives of others, was supposed to stem from getting down with the devil.

The temptation of St. Anthony is one of the key stories in Christian scripture, and has been painted and used in art thousands of times in accordance with its importance. But, interestingly, one of the key moments in the story, in which St. Anthony is beset by "demons" and has to resist their temptations, has changed a lot over the centuries. If you look at pictorial representations of the demon episode in European art, something shifts: in the 16th century, Anthony is often pictured as tempted and tortured by hideously deformed hell-beasts (check out Matthias Grunewald's image from 1512 if you're not prone to nightmares). From then onwards, though, the temptation in art started to take another form: instead of horrific demons, he was plagued by naked demon-ladies, insisting that he give up his celibacy and join them.

By the 19th century, it was commonplace for painters to show St. Anthony beset by beautiful naked women, with his poor saintly face at the center looking absolutely distraught at all the horrible womanly flesh being thrown at him. Hell, Flaubert wrote about it.

Sexy demon-ladies, according to one scholar, became more of an artistic theme in this period because of "the growing dread associated with rising statistics of venereal disease linked to "women of pleasure." In other words, this was the all-women-are-demon-whores artistic period.

5. 14th-17th Centuries: An Elderly Woman's Corpse Can Become A Demon

In Ming Dynasty China, from around the 14th to 17th centuries, a specific problem emerged that linked women with demonic issues: the idea of the corpse of an elderly woman could become a demon that took all of the water and health out of the ground around her. "Drought demons," as they were called, were said to form when an elderly woman was buried and, under certain circumstances, became warped into demonic form — they were known as the "desiccated woman who sucks out a region's fertility," which paints a pretty clear link between female sexual potency and environmental health. If you wanted to get rid of the demon, you had to dig up the poor old woman's corpse and destroy it in some way, presumably through fire.

Exorcisms — the art of drawing out demons that have taken possession of human bodies — have been a part of Christian tradition for a substantial period, and scholars have noted that they often seemed to target ladies. "The question of whether exorcism, by its very nature, functioned to subjugate women and demonise their spiritual experiences," notes Francis Young in A History Of Exorcism In Catholic Christianity , "is one that a history of exorcism must address." Women, in general, were likely thought to be more vulnerable to invading demons because of their general physical and moral weakness. They were seen as, essentially, an open window for demonic presences to climb into.

The results were often not particularly pleasant. In Victorian London, we have the record of an exorcism done on a young servant girl, Sara Williams, by a priest who'd decided her possession required immediate attention. She had relics pressed on her skin, was beaten with bits of priestly vestments, was forced to vomit, and had brimstone thrust in front of her nose for hours at a time.

The idea that British suffragettes, in their demand for equal voting rights for women, were somehow disrupting the order of heaven and causing serious panic (particularly when they started setting off bombs) was not an unfamiliar idea to religious opponents of voting rights for women. The notion of suffragettes as potentially controlled by Satan came up in one particularly angry set of editorial essays in Our Hope , an American periodical, in 1913-14. Suffragettes were called "demon-possessed," and the editor noted, "These satanic instruments seem to stop at nothing. Like their master, who is a murderer from the beginning, they may resort to poison and destroy human life. It is significant how Satan uses woman in these closing days of our age... He goads them on to perpetrate these wicked actions." This line of insults didn't seen to do much to damage the cause; Elizabeth Cady Stanton probably thought that was funny, to be honest.