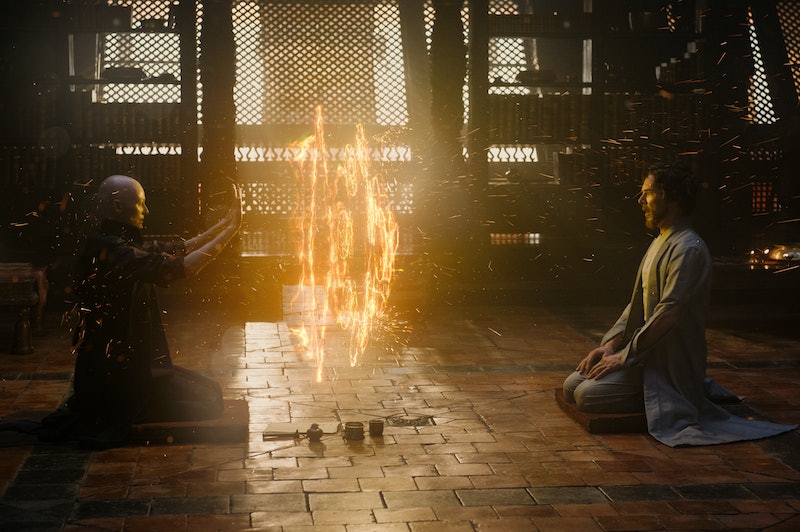 I'm sure a fan or two has described a Marvel fight scene as "mind-blowing," but Doctor Strange will be the first film in the franchise to dig into the very concept of reality. If Doctor Strange 's trippy trailer is any indication, the movie is bound to ask some interesting questions about the universe that could challenge your perspective. One of the rules that binds (or unbinds, for that matter) the mythology of Doctor Strange is the idea of the multiverse. In an interview with ComicBook.com, director Scott Derrickson ventured a hope that the world-bending in this movie would just be "the beginning of the Marvel Cinematic Multiverse." Basically, Doctor Strange introduces parallel universes and timelines to the Marvel mythos. You may have heard the term in more scientific spaces as well; it's not just a storytelling concept. But could the multiverse of Doctor Strange really exist?

As shown in the film, the multiverse means near-complete freedom for the Marvel universe. Different versions of characters can pop up from different timelines, and the multiverse creates a structure where they'll all be capable of interacting. The multiverse isn't entirely invented, however. Scientists have been studying the possibility of multiple parallel universes for years. In April of this year, an article by Sarah Scoles on Smithsonian.com questioned whether physicist or astronomers would ever be able to prove the existence of the multiverse without a doubt. Because the Smithsonian knows your heart, it explains the theory with the assistance of a food metaphor. Scoles writes:

The universe began as a Big Bang and almost immediately began to expand faster than the speed of light in a growth spurt called “inflation.” This sudden stretching smoothed out the cosmos, smearing matter and radiation equally across it like ketchup and mustard on a hamburger bun. That expansion stopped after just a fraction of a second. But according to an idea called the “inflationary multiverse,” it continues—just not in our universe where we could see it. And as it does, it spawns other universes. And even when it stops in those spaces, it continues in still others. This "eternal inflation" would have created an infinite number of other universes.

The infinite nature of the multiverse is what may keep it a mystery, regardless of scientific advancement. If the universe is what's known, then how can there ever be proof of what's beyond it? At this juncture, philosophy sort of takes over from science. For some academics, it's enough that the theory of the multiverse is viable, even if it can't be confirmed.

Heady stuff, right? That would be why a scientific consultant was on the payroll for Doctor Strange. Astrophysicist Adam Frank told TechCrunch, “The reason I think I was asked to come in is that I’m a scientist, but I had a long interest in human spirituality." Derrickson wanted a mind who could help him to reconcile those two fields. "And what I suggested was that really it’s about mind and matter," Frank said. "The big open frontier in science is the nature of consciousness. We don’t really have a science of consciousness." Frank admitted that he doesn't believe the multiverse really exists, though he helped to define the rules for the Doctor Strange take on it.

Science isn't decided on the existence of the multiverse. But Marvel is diving into its world-expanding development with both feet.

More like this
These 25 International Horror Movies On Netflix Prove Fear Is A Universal Language
By Bustle Editors
The 50 Most Powerful Characters In The Marvel Universe, Ranked
By Johnny Brayson and Nola Pfau
Lin-Manuel Miranda & Tituss Burgess React To 'Little Mermaid' Casting Backlash
By Radhika Menon
Lego Just Announced Its 'Black Panther' Set Release Date
By Maxine Harrison
Get Even More From Bustle — Sign Up For The Newsletter