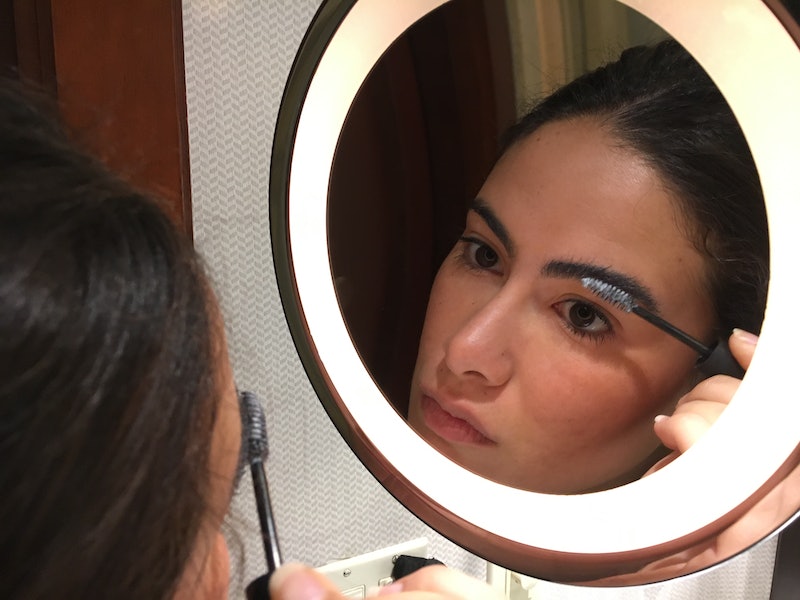 I have a complicated relationship with my eyebrows. I had a Frida Kahlo-style unibrow until I was 14 (it looked a lot better on her than it did on me), and recently had a tweezing accident that left me without half of my left brow. I also happen to have a vicious cowlick, which makes styling my brows on a daily basis a major pain in the butt. So when I heard that beauty bloggers were using soap to style their eyebrows, I figured what the hell? It couldn't possibly be worse than anything my brows and I have already been through together.

Basically, bloggers have been taking a wet eyebrow brush, scrubbing it over a basic bar of soap, and then brushing it into their eyebrows. The waxy texture of the soap is supposed to give you fuller brows while also allowing you to style them the same way an eyebrow gel would, but allegedly better.

The blogger trick got its official stamp of approval when eyebrow-gurus-turned-cosmetics-brand Anastasia of Beverly Hills posted a tutorial to its Instagram. It pictures a girl with thin, wispy brows using a wet bar of soap to give herself some added thickness volume, and — kind of surprisingly, TBH — it works.

I mean, dayum. Was this the solution to my decades-long eyebrow issues? Considering my boyfriend has taken to calling the dry, white flakes in my eyebrows from my salon-quality eyebrow gel "eyebrow cheese," (which I'm sure looks really cute on my one-half brow) testing out soap was certainly worth a try.

I decided to try the trick on vacation (trust me, I don't have this many mirrors in my West Village apartment), so used the fancy soap from the hotel room, but you can use a regular old bar of Dove or Dial and achieve the same results. I took the spoolie brush from my regular eyebrow gel and soaked it in a glass of warm water to get rid of the remnants of the old, eyebrow-cheese-producing product. Then, I ran it under the faucet to make sure it was totally clean.

After my brush was sufficiently wet, I rolled it around on the soap like crazy. I had no idea how much soap was necessary for waxing down eyebrows, so I rolled and rolled the brush until it was completely covered in foam.

Then, I took the soapy spoolie brush and used it to brush my eyebrows straight up, basically copying exactly what the girl in the video did.

Once all of the hair was coated in "wax" and sticking straight up, I used the spoolie brush to comb them back down toward the outer edge of my eye and set them flat down, which is how I personally like to wear them.

They laid perfectly flat (even my cowlick! Which has literally never happened before) and kept their shape all day long. They felt a little slick, but in a nice waxy way that helped them maintain their shape. The soap did get on the skin around my eyebrows during application, which washed off some of my foundation, so I would recommend doing this part of your routine before putting on anything else. I opted to skip out on using an eyebrow pencil because my brows are dark and thick enough on their own (#blessed, minus the fact that I need to get them waxed every 15 days), but pencil would definitely go on smoothly and easily should you want to add it to your version of the look.

After this experiment, I'm officially a convert. Considering a bar of soap costs like, $1, and will last me for months, I don't think I'll ever buy another tube of eyebrow gel again. And the best part? No "eyebrow cheese." All day long.