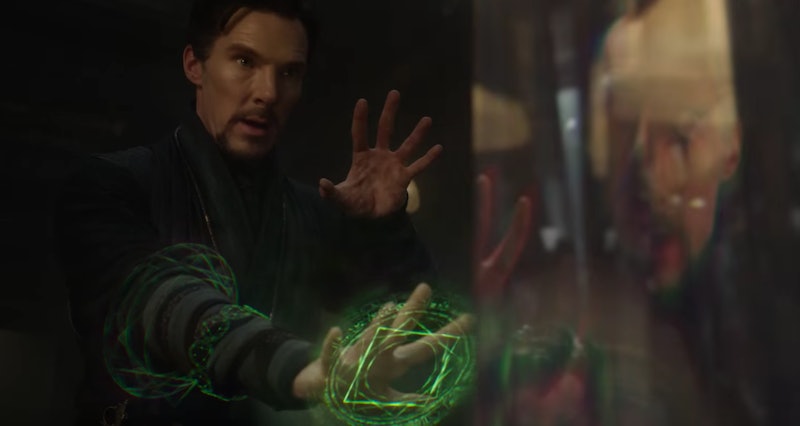 To be a part of the Marvel Cinematic Universe (MCU), a film has to have two things: 1) a basis on a Marvel comic, and 2) some Marvel Easter Eggs to connect it to other films. Doctor Strange is one of the most standalone Marvel movies seen in a while (yes, including Guardians of the Galaxy), and there are few mentions of the Avengers, either as a group or as individuals. Neither Civil War nor the Sokovia Accords are mentioned, and Doctor Strange doesn't even try to contact fellow cocky billionaire Tony Stark after he hurts his hands. Still, the film does have its fair share of references linking it to some of the more established Marvel features. These 11 Marvel Easter Eggs in Doctor Strange link the film to the MCU and give hints of what's to come for the franchise.

Tony Stark's Avengers Tower is seen in its rightful place as part of the New York City skyline. Some things never change.

The Eye of Agamotto, a magical object that has the power to manipulate time, features heavily in the plot of Doctor Strange and is revealed to get its power from the Time Stone. The Time Stone is one of the Infinity Stones, along with the Space Stone in the Tesseract seen in Avengers and the Mind Stone that powered The Vision in Age of Ultron. Various Infinity Stones have popped up throughout the MCU, presumably all leading up to Avengers: Infinity Wars, in which the villainous Thanos will presumably attempt to capture each of the stones.

In Doctor Strange, Christine Palmer is an ER surgeon who shares a romantic past with Strange himself, but in the comics Christine Palmer is actually the name of one of the Night Nurses (there have been three). The character has been changed dramatically for the film adaptation, so it's likely Palmer's comic storyline won't feature into the MCU at all, but the name serves as a nice nod to the original character.

As noted by Digital Spy, Dr. Nick West, who in the movie has a bit of a rivalry with Doctor Strange, is based on Nicodemus West, a doctor who, in the comics, is incredibly guilty at being unable to save Strange's hands after his car accident. In the comics, West travels to to train with the Ancient One, but abandons the world of magic before he could truly become a sorcerer.

5. Wand of Watoomb & Other Relics

Relics, objects imbued with magical powers to help sorcerers, feature prominently in Doctor Strange. Most notably, Strange finds himself in possession of the Eye of Agamotto and the Cloak of Levitation, but there are also a few other relics from the comics that appear, however briefly, in the film. When he prepares for battle, Wong is seen grabbing a kind of magical staff, which, according to Digital Spy, is really the Wand of Watoomb.

6. The Book of Cagliostro

Master Hamir appears only briefly in a few scenes during Doctor Strange's time at Kamar-Taj, the base of the Ancient One. But he's more than just a background character. As noted by Digital Spy, in the comics Master Hamir is a dutiful servant to the Ancient One and Wong's father.

Daniel Drumm is only briefly seen on screen in Doctor Strange, but he's mentioned enough times that his name sticks out to even non-Marvel fans. So, who is Daniel Drumm? According to IGN, Drumm is a character in the comics who, after death, is summoned by his brother Jericho Drumm, also known as Brother Voodoo. Brother Voodoo frequently appears with his brother's ghost by his side, and, given Drumm's violent end in Doctor Strange, Voodoo could soon be joining his brother on the big screen.

Thor appears in the first post-credits scene in Doctor Strange as probably the biggest Easter Egg in the film. The scene, which sets up Thor: Ragnarok, finds Thor meeting with Doctor Strange in New York as he searches for his father, Odin.

Finally, Stan Lee pops up in Doctor Strange for his signature cameo. This time, Lee plays a clueless passenger on the bus who, unbeknownst to him, finds himself in the middle of an inter-dimensional fight between Doctor Strange and Kaelicius.

Knowing Marvel, there are probably Easter Eggs within Easter Eggs in Doctor Strange, but I'd say these 11 Marvel Easter Eggs have given us plenty to speculate on for now.