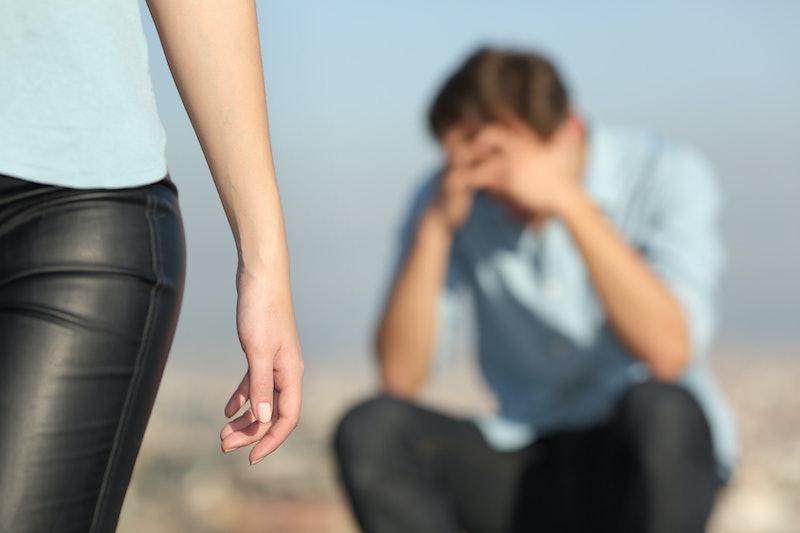 Sometimes people suck. They cheat on you with your best friend and skip your sister’s wedding to watch a basketball game they could DVR and watch later. In these situations, you probably don’t need to worry about breaking up sweetly — you can just end it.

But sometimes people who aren't right for you are nonetheless great, smart, attractive, and incredibly nice. They walk your puppy in the middle of the night and listen intently while you gossip about your coworkers. Ending things with these people is harder. But that doesn’t mean you’re stuck in a relationship with them for life. There are legitimate ways to break up respectfully and maturely — and we’ve rounded up the top 7.

1. Tailor the breakup to the relationship.

According to psychoanalyst and psychotherapist Janice Lieberman, Ph.D., a relationship requires an official, face-to-face breakup if you’ve been dating for a few months or more. Emails, texts, and gchats are no longer options. A serious relationship in which you’ve shared important experiences merits in-person closure. That way both parties have a chance to talk about their feelings.

Let’s face it: There’s no “good” time to break up with someone. But, according to JoAnn Magdoff, Ph.D., a New York-based psychotherapist who works with individuals and couples, you can at least try to deliver the news when your S.O. is relatively un-stressed about other parts of his or her life. In other words, if your partner’s grandfather just passed away, consider waiting a few days before saying you don’t want to be with him or her anymore. The conversation has to happen eventually, but there’s no need to make the person feel worse than he or she already will.

Except don’t say exactly that, ever. The general idea is to focus on what makes you a bad fit for this relationship, and not necessarily your partner. As psychologist and relationship coach Linda Young, Ph.D. writes on PsychologyToday.com, mention a few concrete reasons why you aren’t fully committed to the relationship. (Think: You aren’t ready to be exclusive or you’re too caught up in your career.)

Oftentimes the truth is that you’re ending things because your partner can’t give you everything you want. Relationship expert Susan Heitler, Ph.D. recommends that you help your soon-to-be-ex understand where you’re coming from by mentioning some exact behaviors that bothered you. So instead of saying “I can’t be with you because you’re clingy,” you could say something like, “When you got upset the other night because I was going out with my friends, I realized I couldn’t be there for you as much as you want me to.”

Psychologist and relationship expert Seth Meyers, Ph.D. (the other Seth Meyers) has a handy trick for figuring out if honesty really is the best policy. Ask yourself if most people would think that your reasons for ending the relationship are rational. But since it isn't always wise to base your behavior on what other people think, I'm amending that advice slightly: Decide if you'd think that motivation was rational if someone used it to break up with you. If the answer is yes (your boyfriend constantly flirts with other women; your girlfriend has no interest in spending time with your friends), then tell it to your S.O. straight.

If, on the other hand, you would not consider those reasons rational (your girlfriend doesn’t floss, your boyfriend has an annoying laugh), then come up with a more general explanation for why you’re ending things, like you don’t have the time right now to invest in a long-term relationship. The point is to make your decision understandable for your S.O. — not to hurt his or her feelings.

On a similar note, if the reason you’re leaving is because you met someone else, don’t share that information with your partner. “No good will come from that conversation; it will just make [your partner] feel bad,” says Magdoff, adding, “You don’t owe them the entire truth.”

In some cases, you may feel so relieved to finally be getting rid of an unsatisfying relationship that you forget that someone else’s emotions are involved. Even if you aren’t so attached to your significant other anymore, relationship expert Michelle Callahan, Ph.D. advises Cosmo Latina readers to keep in mind that the person you were involved with may feel a lot more attached to you. So prepare for your partner to be surprised, hurt, frustrated, angry — the whole rainbow of breakup feelings — and for how you’re going to deal with those emotions when they arise.

7. Ask for his or her perspective.

I’m not advising you to ask for your partner’s permission to break up — you’re definitely breaking up if you want to. But, especially in the case of a long-term relationship, it’s important to give your S.O. a chance to voice any concerns that he or she may have had about the partnership. Dating and relationships coach Christine Hart advises Elle Canada readers to say the relationship isn’t meeting your needs and then ask, “What do you think?”

A guy once asked me that question, and although I was upset at first, it made me realize that I actually totally agreed with him. We were a lot better suited as friends. Adios, amigo.

More like this
Are Sagittarius & Sagittarius A Good Match? Astrologers Weigh In
By Kristine Fellizar
15 Ways To Deal With A Toxic Family During The Holidays
By Gabrielle Moss and Carolyn Steber
Olivia Wilde & Harry Styles Are Reportedly "Taking A Break" After Almost 2 Years
By Jake Viswanath and Radhika Menon
Are Sagittarius & Aquarius Compatible In A Relationship? Astrologers Weigh In
By Kristine Fellizar
Get Even More From Bustle — Sign Up For The Newsletter