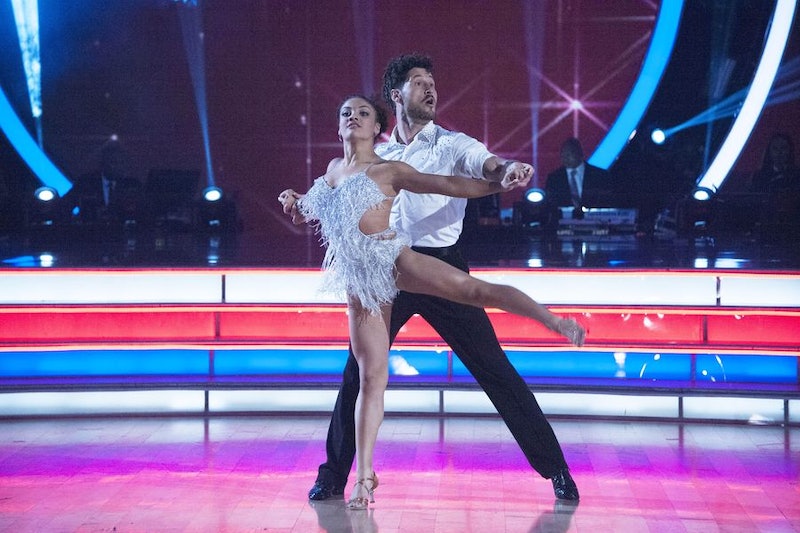 More weeks of Dancing With The Stars are behind us than in front of us, and that tends to make some of the dancers on the show pretty sentimental. Take, for instance, Val Chmerkovskiy — we’re used to see him in full on warrior mode, teaching choreography and not letting anyone get in the way of him and his partner. Well, Laurie Hernandez has carved a hole in the heart of this dancing beast, because Val got so emotional when talking about Laurie on Dancing With The Stars.

Before their Halloween dance, Val spoke of how proud he was of Laurie and how far she’s come and how she’s done so well — she was getting tens from the onset of the show (basically), and even though she got a few eights last week, Val is still her biggest fan and so happy with what they’ve accomplished together. After the dance was over and the scores were read, Laurie waxed poetic about Val and how much she cares about him and how supportive they are of each other. Val was shaking — that’s how emotional he was over all of this. It’s so amazing to watch how quickly people on this show can bond — I guess when you’re spending 10 hours a day together, it’s easy to get close.

Laurie and Val are definitely heading to the finals on Dancing With The Stars, but will they bring home that Mirrorball trophy? Possibly. Laurie and Val are very good, but so is James Hinchcliffe, and I would also say so is Jana Kramer. The finals are going to be very, very close on Dancing With The Stars. Win or lose, though, Val and Laurie definitely have each other’s backs.