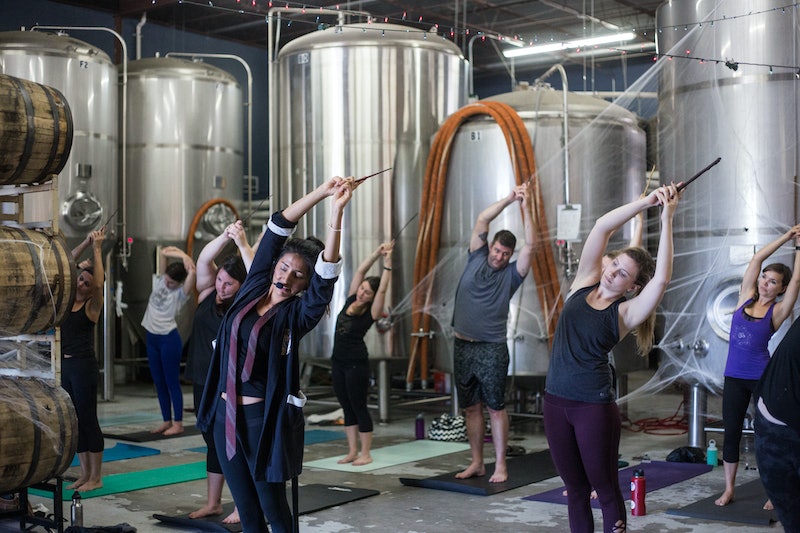 Proving that Muggles can make their own magic just fine on their own, thank you very much, two sisters created a Harry Potter yoga class so #blessed that that it will make you want to disapparate from whatever ho hum place you are right now and straight to Austin, Texas, where the sold-out class took place. Certified yoga instructor Isabel Beltran and her sister Ximena Larkin planned this class down to such a tee that it makes the Yule Ball look like your semi-abandoned neighborhood block party. On Oct. 30, 34 lucky witches and wizards headed down to Circle Brewing Co. — also the home of the baller Pints & Roses yoga class — and did Slytherin cobra postures, Downward Fluffy ("The trick with any beast is to know how to calm him," y'all), and cast Patronuses to ward off dementors. Basically, everyone's Hogwarts letters came, except better — because this time it came with yoga, snacks, and booze.

The event wasn't just magical for the sake of Harry Potter, though, but for what it largely represented. The event was a group effort between Ximena, Isabel, and Isabel's boyfriend, who is a co-founder of the brewery where these yoga classes take place. They frequently collaborate on fun themes like this, and Ximena thought there was no better time to incorporate a childhood favorite than this month.

"I was reflecting on Harry Potter because Halloween night is the night his parents died and I thought it would be interesting to do something around Harry Potter, Halloween and death (from our culture's perspective)," Ximena writes to Bustle. "We're Mexican and celebrate the Day of The Dead. It's not morbid, but rather a celebration of life (of other's as well as our own). I'm the bigger Harry Potter fan between the two of us and the series (especially the last book) is something that changed my perspective on death."

The class paid homage to all three of those concepts, leading participants through an entire magical journey on the Hogwarts Express, navigating their broomsticks, and channeling their inner Professor McGonagall to transfigure into cat poses. At the end of the class, wizards and witches were offered an Invisibility Cloak (or a blanket) while Isabel read The Tale of Three Brothers from Harry Potter and the Deathly Hallows and led them into a five minute savasana.

The class then ended with Dumbledore's parting words to Harry: “Do not pity the dead, Harry. Pity the living, and, above all, those who live without love."

After the class, participants were treated to Sorting Hat cookies that had flavors for different Hogwarts Houses, a Mandrake Garden, a Potion Station, and an actual paper-mache Sorting Hat, all decorated and arranged by Isabel. They also drank Pumpkin Juice beer from Circle Brewing Co., which, TBH, sounds way more autumnal and delicious than butterbeer — no offense, Madam Rosmerta.

Sorry, Mrs. Weasley, but Isabel's DIY game is stronger than yours.

There was an extra surprise for the ~bad~ witches and wizards in the crowd, in the form of Isabel's hand-stenciled "Have You Seen This Wizard?" poster. But really, can you really blame anyone for escaping Azkaban to live the Harry Potter yoga life? Seems like a legit enough excuse to bail on imprisonment, if you ask me.

If you have burst into tears that rival Moaning Myrtle's knowing that you don't have a Time Turner to go back and experience this yourself, never fear: Ximena tells Bustle that they have plans to do more Harry Potter yoga classes. In the meantime, we're just going to have to be patient and hope this trend spreads faster than the "Potter Sucks" badges at the Triwizard Tournament did through all of Hogwarts (womp, sorry Harry).

Check out more deets on Isabel's yoga classes and Circle Brewing Co. by heading to their websites! Keep your eyes peeled for more classes coming soon.