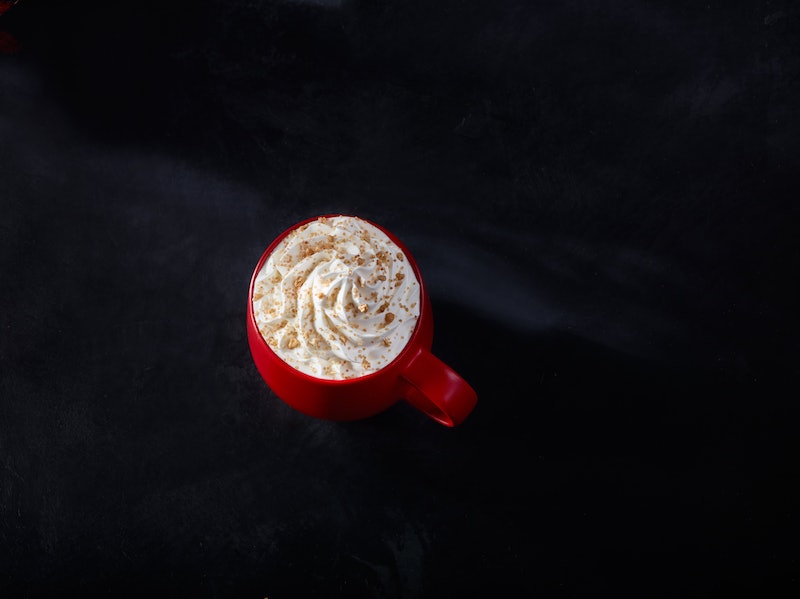 Sad about Halloween being over? This’ll make you feel better: As of November 1, Starbucks holiday drinks are back in stores, including the Chestnut Praline Latte, first debuted in 2014. “What’s in a Chestnut Praline Latte?”, you ask? Simple: It’s basically the holidays, warmth, and happiness, blended in a cup and topped with whipped cream.

OK, that might not be entirely accurate. The Chestnut Praline Latte is made up of freshly brewed espresso, caramelized chestnut flavoring, and steamed milk, with a healthy dollop of whipped cream and a sprinkle of spiced praline crumbs on top. (ICYW, pralines are usually made up of nuts and sugar, so, you know, YUM.)

If you’re like me, you might be wondering, “What do chestnuts actually taste like?” They’re popular in Europe and Asia, but here in America, we don’t see them that often (despite the fact that we sing about roasting them over an open fire at Christmas). Although they were once common in the United States, a deadly chestnut fungus wiped out most American chestnut trees in the early 20th century (yes, really), so it’s not surprising that you might not be familiar with their flavor. According to the blog Our Life in Meals, roasted chestnuts taste “sweet and earthy, somewhat resembling a sweet potato.” So now you know!

If you’re hoping to get a bit of a jolt from your holiday beverage, you’re in luck, as a Tall Chestnut Praline Latte (12 oz) contains 75 mg of caffeine. (That's roughly equivalent to a shot of espresso or a cup of coffee.) Of course, if you’re not a caffeine fan, you can always order a decaf version.

The Chestnut Praline Latte, along with fellow holiday faves like the Caramel Brulée Latte and Peppermint Mocha, will be available from today through the holiday season. Depending on where you live, a Tall will cost you between $4.25 and $4.75.