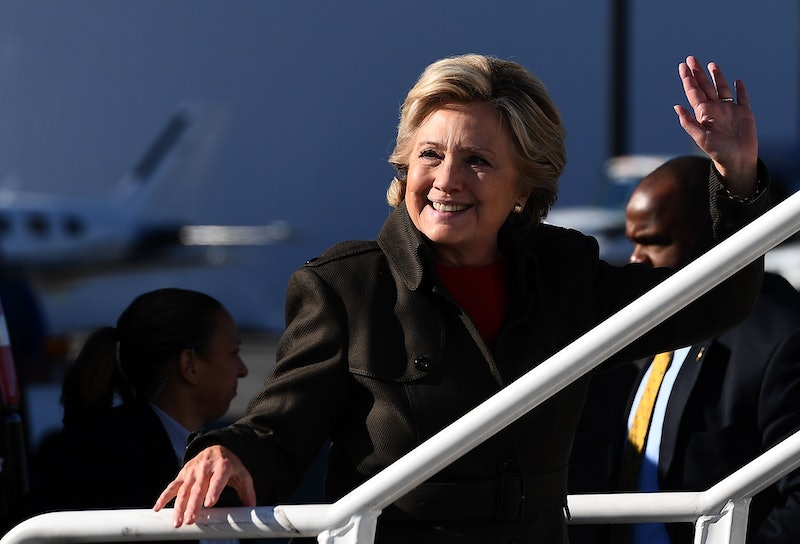 There's only one week left until the 2016 presidential election, and everyone is crunching the numbers on voting, spending, and odds of winning. So just how much money has Hillary Clinton spent on her campaign? The numbers are kind of staggering.

Clinton's presidential bid has cost more money than her opponent's, but the two nominees have spent roughly the same percentage of their campaign funds, according to data compiled by Bloomberg. The Democratic candidate has spent 84 percent of the approximately $1.1 billion she has raised during this election cycle, or $897.7 million. Donald Trump has spent 83.9 percent of his campaign funds.

The campaign spending data comes from the final pre-election report Clinton's super-PAC filed with the Federal Election Commission. That report covered the 2016 Democratic presidential campaign from Oct. 1-19. During that period, Clinton raised $52.4 million and spent $48.4 million.

Clinton has outspent Trump on campaign ads throughout the election. Media purchases account for $30.3 million of the money the Democratic candidate spent during the first half of October, with media production and online advertising costing Clinton a combined $4.4 million. For that period, she was alone in buying ads in Arizona, Georgia, and Nebraska. In battleground states during early October, Trump only outspent Clinton in Maine and Wisconsin.

So where did all that money come from? About 19 percent of Clinton's campaign money has come from four super-PACs: Priorities USA Action ($173.3 million), American Bridge 21st Century ($15.2 million), Correct the Record ($9.4 million), and Ready PAC ($3.6 million).

An additional $750.6 million has come from the Democratic National Committee and Clinton's joint fundraising committees, the Hillary Victory Fund and the Hillary Action Fund.

The top five individual donors to Clinton's campaign are:

As of Oct. 19, Hillary Clinton had spent $897.7 million on her campaign, leaving her with $171.6 million on-hand to spend in the days leading up to the general election.

Check out how much money Donald Trump has spent on his campaign here.