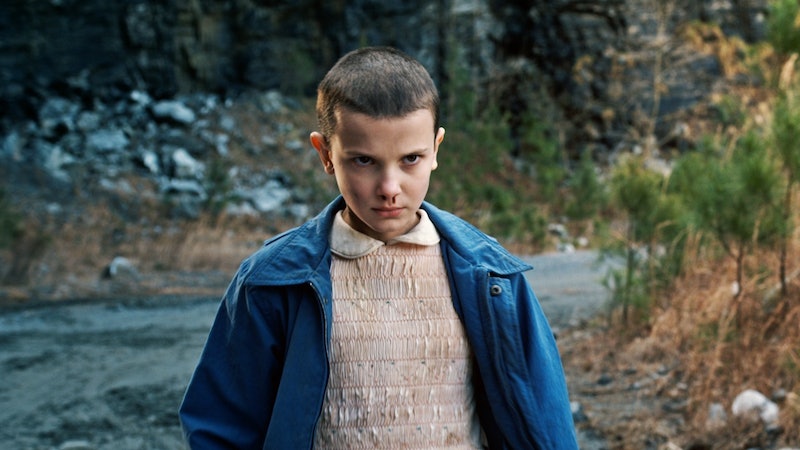 While this TV news isn't all that surprising, it certainly is exciting. Stranger Things ' Millie Bobby Brown is returning for Season 2, according to TVLine. That's right, Eleven will reportedly be back, despite the creators behind the Netflix show, the Duffer Brothers, originally saying they weren't so sure. The brothers' exact words to Entertainment Weekly were that Eleven's role was "up in the air." How coy of them. While Netflix has yet to confirm the news — probably just trying to build up some anticipation for the new season, set to stream in 2017 — it's no surprise that the sleeper hit's breakout star would be back for another round. And, honestly, how could Brown not return for at least nine of the season's episodes?

Spoilers ahead, so turn back now if you haven't finished the first season. But also, what are you waiting for, go finish the first season. Now where were we? Ah, yes, when fans last saw Eleven, well, we didn't see Eleven, because she had sacrificed herself for her friends and disappeared, along with the Demogorgon. The only thing that hinted that she wasn't so far gone was Police Chief Jim Hopper traveling out to the forest to leave some Eggos for the young girl.

It left fans with so many questions, questions that, luckily, seem like they may get answered in Season 2. Here are the things we'd really like to know more about when Eleven returns.

1. Where Did Eleven Actually Go?

It's probably the most important question anyone has for Season 2. Did she end up in the Upside Down again or is she back at the Department of Energy building? Is she just out in the woods hanging out near the portal? I really, really want to know. Like, really.

2. Does Eleven Have A Prior Connection To Will Byers?

In the first season, Eleven saw a photo of Will Byers and knew who he was. It was never brought up again or explained how she recognized him, but it had some wondering if the two had met before. Could their connection be a key to what's going on in Hawkins, Indiana? One Redditor wondered if Eleven was purposely set loose to find Will, which could mean he's as special as she is. I would definitely like to know if that's, in fact, true sooner rather than later.

3. Is Eleven Another Side Of The Demogorgon?

Some believe the reason Eleven could defeat the Demogorgon in the school is because she shares a psychic link with the monster. You know, like she's the good to its evil. Others wonder if she's actually another species of Demogorgon altogether, one that has yet to be revealed — until Season 2, perhaps?

4. What Is Going On With Chief Hopper & Those Eggos?

Hopper left those Eggos, but he also made some sort of deal with Dr. Brenner to help save Will Byers that had something to do with Eleven. Finding out what Hopper agreed to could be the key to the whole season. Some people hope it will also reveal a connection between Hopper's late daughter and Eleven.

5. Will Eleven Actually Get To Say Something More Than "Papa"?

Brown sure hopes so. "She's got to talk a bit more,” Brown said at New York Comic Con. "She's just got to.” I certainly agree. While we know that Eleven certainly has a good reason for not wanting to speak — a Reddit fan counted that Eleven says 246 words — I'd love to hear what she's got to say about her experience in the lab and in the Upside Down.

It's a question I'd love to see definitely answered. It seems the question of who Eleven's mom is was answered last season after Hopper and Joyce visited a woman named Terry Ives, who believed she had lost her daughter while at the lab. In reality, though, it seems Brenner covered up the birth. Did Brenner do this because Eleven was his daughter, or because he knew the power she would hold? No matter the answer to the question of who Eleven's parents are ends up being, it's definitely going to be interesting.

7. Will Eleven Get To Go To The Snowball Dance?

All right, this may be inconsequential, but she seemed pretty excited about the prospect of heading to a school dance with her crush Mike, and I'd really like to see that follow through.

While we will have to wait to see which questions Season 2 of Stranger Things will resolve, it's good to know the question of whether Eleven will be back has been answered.

More like this
'Stranger Things' Finn Wolfhard Is “Proud” Of Noah Schnapp For Coming Out
By Sophie McEvoy
'That '90s Show' Is Officially Coming Back For Season 2
By Gretchen Smail and Grace Wehniainen
The Plane Crash In 'Dear Edward' Is Based On A 2010 Tragedy
By Grace Wehniainen
Keyla Monterroso Mejia Is Finally The Star Of The Show
By Gabrielle Bondi
Get Even More From Bustle — Sign Up For The Newsletter
From hair trends to relationship advice, our daily newsletter has everything you need to sound like a person who’s on TikTok, even if you aren’t.