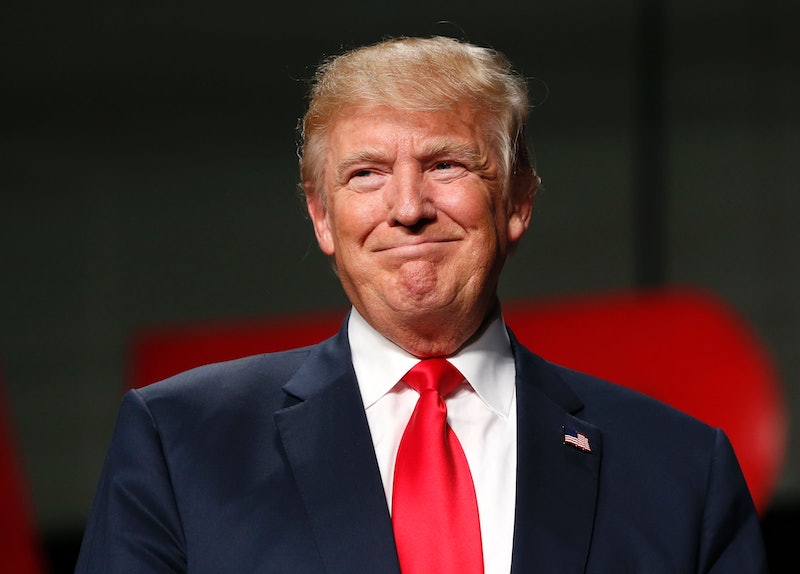 With only a week left until the country votes in a new POTUS — and we're forced to say goodbye to the coolest First Family ever — it's time to take a look at how both major-party campaigns have been financed. How much money has Donald Trump spent on his campaign? In the first part of October, the GOP nominee spent more money than he raised.

As of Oct. 19, Trump's campaign has raised $512.2 million, about 48 percent of Hillary Clinton's $1.1 billion, according to data compiled by Bloomberg. Both candidates have spent the same portion of their funds, however. Trump has paid out $429.5 million, or 83.9 percent of the money he has raised, compared to Clinton's 84 percent.

The most recent campaign spending data comes from the last pre-election reports filed with the Federal Election Commission by the candidates' super-PACs. Those reports cover the first two-thirds of October, in which Trump's campaign raised $28.8 million and spent $47.6 million.

As in Clinton's campaign, media purchases took up much of the early-October spending in the 2016 GOP presidential bid, to the tune of $19.3 million. Trump spent an additional $14.2 million on digital consulting and online advertising.

In battleground states, between Oct. 1 and 19, Trump spent no money on advertising in Arizona, Georgia, and Nebraska, but was the only major-party candidate to buy ads in Wisconsin. He also outspent Clinton in Maine, but was outspent in nine other states, including North Carolina, Pennsylvania, and Virginia.

So where is all that money coming from? Trump has boasted about self-funding his campaign, but has only contributed about $56 million to his own cause. The bulk of his campaign money has come from the RNC ($284.6 million) and two joint fundraising committees: Trump Make America Great Again Committee ($193.9 million) and Trump Victory ($97.6 million).

The top five individual donors to Donald Trump's campaign are:

More like this
Archie & Lilibet Are Eligible For Royal Titles — But There's A Catch
By Jake Viswanath
Kim Cattrall Had A 'Sex And The City' Reunion With Creator Darren Star
By Grace Wehniainen
69 Great Gifts For Guys No Matter What Their Hobbies Are
By Teresa Newsome, Mia Mercado and Brittany Leitner
21 Photos Of Prince Harry & Meghan With Dogs Throughout The Years
By Marina Watts
Get Even More From Bustle — Sign Up For The Newsletter