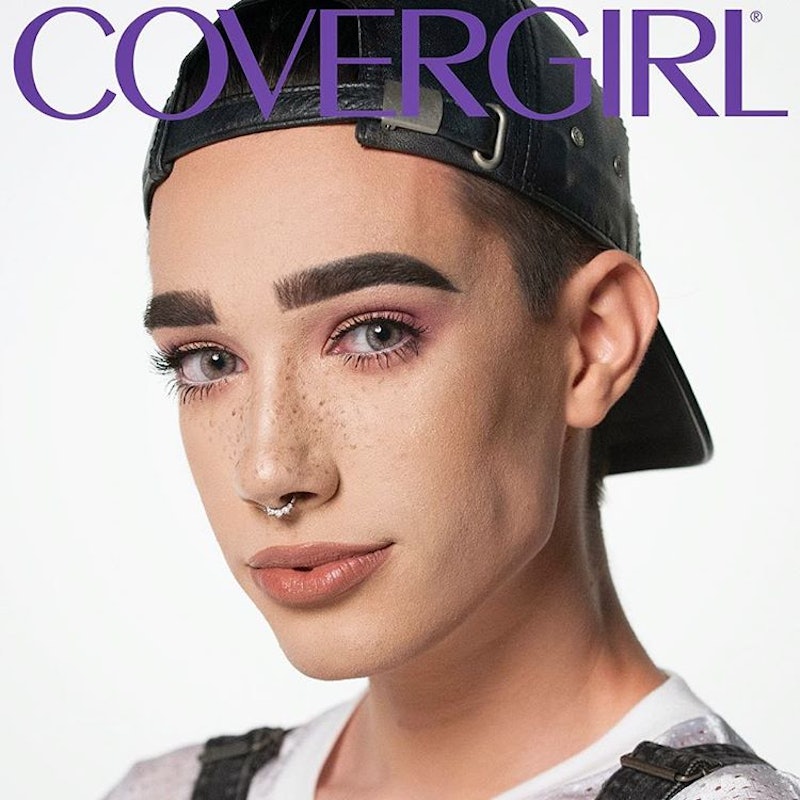 If you didn't know who James Charles was before last month, you most certainly do now. The 17-year-old makeup artist, whose contouring skills put the entire Kardashian Clan to shame, was named the first ever male CoverGirl. He joins the an endless list of fierce female celebs like Katy Perry, Queen Latifah, Ellen DeGeneres,and Taylor Swift as one of the faces of the iconic brand.

On the off chance that you have been living under a proverbial rock since the announcement was made a few weeks ago, I'll spell it out for you: This is a big deal. CoverGirl has always been at the forefront bringing diversity to the beauty industry, and they've brought their commitment to inclusivity to a whole new level by showing that guys can wear makeup too,and look damn good doing it. By making Charles the face of their "So Lashy" Blastpro Waterproof Mascara, CoverGirl proves that their products are meant to be for everyone, regardless of their gender.

So what does 17-year-old Charles think of being a full-blown boundary breaker before graduating high school? "It’s such an honor, and it’s so cool," he tells me over the phone.

"CoverGirl is such an iconic brand, and they’ve been pushing for diversity for as long as they’ve started. And now that they’re taking this huge step forward and including boys, I think it is so cool. Their push for gender inclusivity just shows that makeup really is for anyone who wants to wear it."

Even after a month in his new role, the Youtube-star-turned-overnight-celebrity still seems to be catching his breath, in the most amazing way. He's not only incredibly passionate about what he does (one look at his Instagram feed will confirm that), but he's also managed to stay totally down to earth in the process of his almost immediate rise to fame. Here are seven things you didn't know about James Charles — the new, historic face of CoverGirl.

1. He Didn't Believe It When He Heard The Big News

When Charles first got the call that he was going to be the next face of CoverGirl, he was in New York City for a beauty event. "I was literally standing in a house with 15 of my favorite best makeup artist friends, and my manager called me in the middle of me doing my makeup for the event that day, and she was like, 'I have some news for you,'" he says. “I literally did not believe it. [My manager] convinced me, and then I like, cried.” Pretty much the exact reaction the rest of us would have to major, life changing news, no?

2. His Favorite Former Covergirl Is Zendaya

"She’s one of my biggest idols," he says. "We follow each other on Instagram, we comment on each other's pictures every once in a while, and I know she does her makeup herself for some events that she goes to so we have that in common so that's really really cool." #jealous

Contrary to what it may look like on social media, Charles' perfect highlighter/brows/faux freckles are not part of his everyday look. "You would never see me walking out of the house...like going to the grocery store with full glam on," says Charles. "I’m way too lazy — I need my beauty rest. I have to wake up very early for school anyways so I don’t want to give away two more hours to makeup. Like I said, I’m someone who really believes in feeling confident with makeup and without, so I’m just as confident going to school with no makeup on as I am with makeup on for special events and photos." Stars! They're just like us!

Yes, even our favorite Internet stars have their own favorite Internet stars. For Charles, it's fellow makeup artists Jaclyn Hill and Nikkie. "They’re my two favorite beauty gurus on YouTube," he says. "They’re the two I’ve been watching literally since the beginning, so definitely they’ve inspired me to start makeup in the first place, and I can say I’m friends with them which is cool." Now, if only we could become friends with Charles, it would all come full circle.

5. He Stalks His Discover Page The Same Way The Rest Of Us Do

In case you thought you were the only one who turns to the little magnifying glass on Instagram for glam-spiration, as it turns out, makeup artists do it too! "All my inspiration comes from everybody around me that I follow on Instagram, from my explore page," says Charles. "I see amazing looks from new people literally every single day. I’m always checking people out, I’m always looking up pages, I’m always checking out people that comment on my pictures as well." Leave a comment on one of his posts and who knows — maybe you'll inspire his next tutorial.

6. His Instagram Following Has Doubled In The Last Three Weeks

When Charles was announced as the new face of CoverGirl, his following hovered in the 400K range (which is still crazy impressive, BTW) — as of Wednesday, it was at 837K. "Numbers don’t matter, but what does matter is that I’ve been getting so many DMs lately from people who have been saying they saw my CoverGirl thing and they want to try makeup themselves and they feel inspired and able to do it as well," says Charles. "So even though the numbers don’t matter, I’m now able to reach a larger audience with what I’m creating, which is very important to me — to inspire to push others to feel confident and create as well." See! I told you he was still down to earth AF!

7. He Still Has To Keep Up With School Work

Let me reiterate — Charles is only 17 (so we can file him alongside Millie Bobbie Brown and Maddie Ziegler on the list of "teenagers who are already way cooler than us") and still very much a high school student. "I’ve also been traveling a lot as well, so I’ve been missing school but keeping up with all my work as well," says Charles. Apparently, even when you're friends with Zendaya and Katy Perry, you still need to pass calculus.