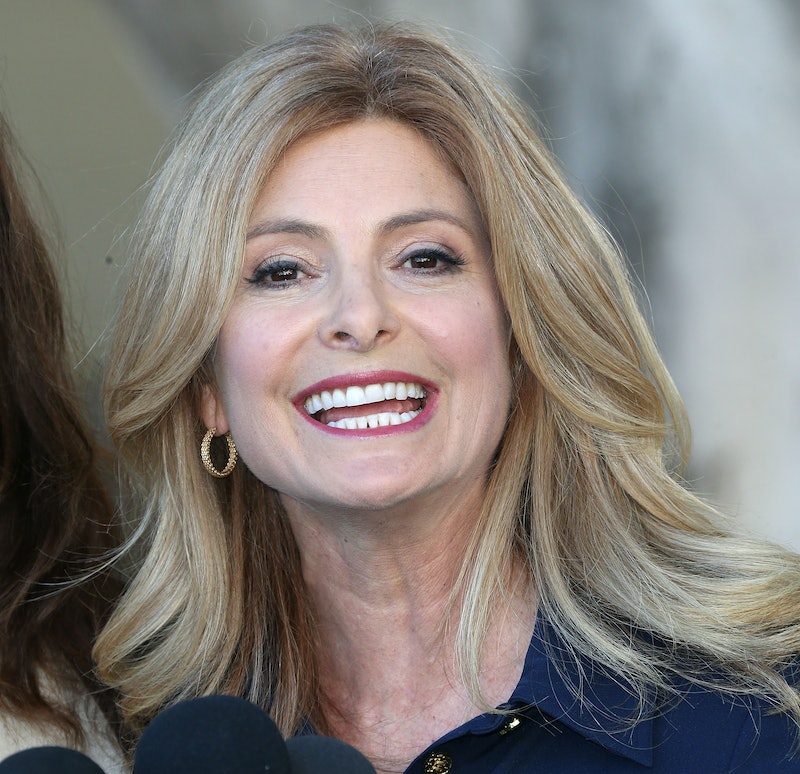 The woman who claims that Donald Trump sexually assaulted her in 1994, when she was just 13 years old, will speak to media for the first time Wednesday, her attorney Lisa Bloom announced in a tweet. Thus far identified as "Jane Doe," the accuser and her attorney will hold a press conference at 3 p.m. Pacific Time on Nov. 2 outside The Bloom Firm in Woodland Hills, California. Alan Garten, general counsel of the Trump Organization, called the allegations "categorically untrue, completely fabricated and politically motivated."

Bloom is the daughter of legendary women's rights attorney Gloria Allred, who is representing several of the other women who have accused Trump of sexually assaulting them over the years. Trump has denied all of their allegations of sexual assault and has threatened to sue his accusers. Back in June, Bloom wrote a powerful piece in The Huffington Post explaining "Why The New Child Rape Case Against Donald Trump Should Not Be Ignored."

It's a piece that's difficult to read, claiming that Trump and his colleague Jeffrey Epstein forced a girl they knew was 13 years old to perform sex acts on them, threatening the lives of her family if she ever told. Trump's lawyers and Epstein have adamantly denied the allegations. The full complaint, filed in federal court, is available for those who have a strong enough stomach.

In addition to being a founding partner at her firm, Bloom frequently appears as a legal analyst for NBC, CBS, CNN, and other major networks, and previously hosted a daily talk show on Court TV for eight years, according to the attorney's bio on her website.

Her legal practice has long focused on defending women, marginalized people, and victims of sexual abuse, and includes "suing the Boy Scouts of America on behalf of a girl who wanted to become a Scout; the Los Angeles Police Department on behalf of a use of force expert in the Rodney King beating trial; one of the largest churches in the world for a boy who was abused at a church summer camp; a powerful Fortune 500 company on behalf of a wheelchair-bound employee who had been harassed because of his disability; and many celebrities and prominent figures in business and politics in sexual harassment cases, including a sitting Los Angeles judge," according to her firm's bio.

On Oct. 27, Bloom got into a heated conversation with Trump supporter Kayleigh McEnany on CNN, who was defending the candidate and Newt Gingrich after the former Speaker of the House claimed Fox News anchor Megyn Kelly was "obsessed with sex" because she wanted to talk about the numerous allegations of sexual assault against Trump.

Bloom's website bills her as "the nation’s premiere television legal analyst," highlighting her penchant for representing the little guy in "David-and-Goliath" fights. Alongside her mother, Bloom was rated one of the top celebrity lawyers in Los Angeles, and has previously represented high-profile clients including Lindsay Lohan's father Michael, Real Housewives stars Michaele and Tareq Salahi, and Mel Gibson accuser Oksana Grigorieva.

More like this
Watch Jacinda Arden’s Devastatingly Honest Resignation Speech
By Sam Ramsden
What The UK Blocking Scotland’s Gender Recognition Bill Means
By Sam Ramsden
Twitter Is Identifying With Sally Field & Jane Fonda’s Friendship In New Viral Video
By Jake Viswanath
Man Meets Politics: ‘Boy Meets World’ Star Ben Savage Is Running For Congress
By Jake Viswanath
Get Even More From Bustle — Sign Up For The Newsletter
From hair trends to relationship advice, our daily newsletter has everything you need to sound like a person who’s on TikTok, even if you aren’t.