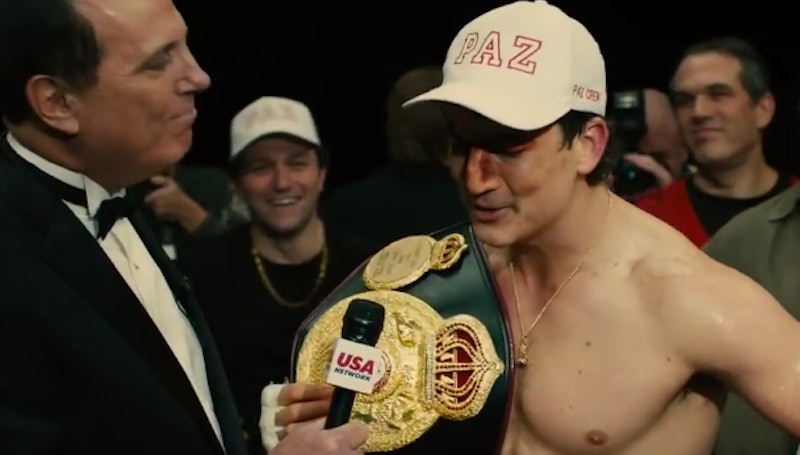 In Bleed For This, Miles Teller portrays one of the most impressive individuals in the history of sport. Vinny Paz, nicknamed the Pazmanian Devil, had just won the WBA World Light Middleweight Title in 1991 when he suffered a devastating car wreck, breaking two vertebrae in his neck. Told by his doctor that he may never walk again, let alone fight, Paz ignored orders and began working out just five days after his accident — while he had a metal halo screwed into his skull. Just 13 months later he was back in the ring, winning his first fight and going on to hold three more titles. But where is Vinny Paz now?

Having retired from the sport for good in 2004 at the age of 41 (he won his last fight, naturally), the now-53-year-old Paz currently lives in Rhode Island, where he has on display a number of souvenirs from his time as a fighter. But he's not living in the past by any means, and is currently getting into some other endeavors. He told The Daily Mail's Annette Witheridge in a recent interview that he's planning on moving to Las Vegas, launching his own wine label called "Five Times Better" (a nod to the five titles he won as a boxer), and he's working on a clothing line as well. Essentially, his goal, as he tells it, is to become a millionaire. "I'm going to be a millionaire," he told The Daily Mail . "I'm a lucky guy. I came through wearing a halo with a broken neck, I won five world titles and made it through life. I have a strength about me."

His desire to earn money comes from a practical place as well, since he lost all of his earnings from his boxing days due to a gambling problem. "I have won maybe a couple of million dollars gambling but I blew $4 or $5 million. The most I ever lost in a single night was $200,000. It's hard to control. I don't gamble now," he said. He also struggled with the law after being caught drinking and driving multiple times, and he took an interesting route to staying out of trouble. "I learned my lesson. I don't drive no more either because I like to drink. So after a couple of DUIs I got rid of the car. I will never drive again," he said.

Vinny Paz is certainly a one-of-a-kind guy, and he's surely going to continue to do his own thing — regardless of what anyone else thinks — for the rest of his days.