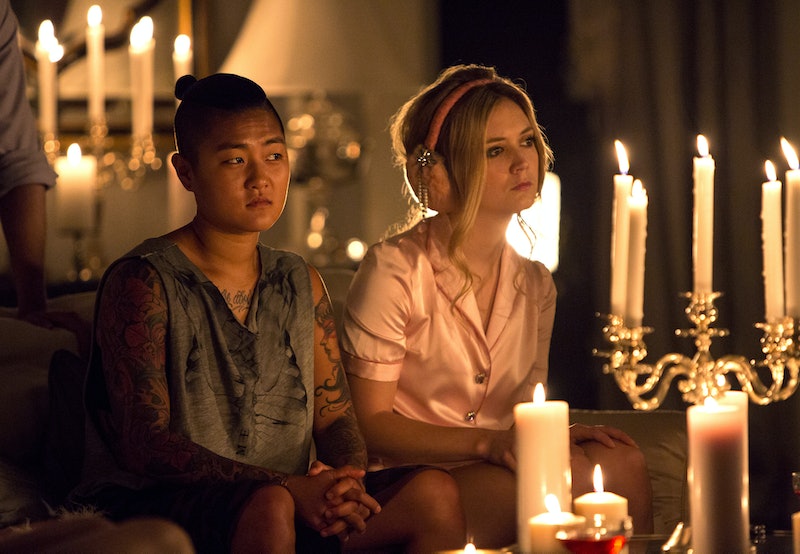 For the past 21 years, GLAAD has studied LGBTQ representation on television and, this year, GLAAD's Where We Are On TV Report found that the percentage of lesbian, gay, bisexual, transgender and queer characters that could be seen on broadcast television, cable, and streaming networks was up. Reading that you may think, we've come along way. But, unfortunately, the numbers don't really tell the story. This so often seems to be the takeaway from these kinds of reports: the numbers are up, but there's still a lot of work to do. It's easy to feel like the media is taking a glass half empty approach to the story, but these cherry-picked high notes of the study don't break down what the numbers really mean or how small the numbers actually are. No one can deny that more representation is a good thing, but it's important to know, in actuality, how little we're working with here.

According to the report, the number of regular and recurring transgender characters across all viewing platforms has more than doubled since last year. The number of bisexual characters across the five broadcast networks — ABC, CBS, FOX, NBC, and The CW — was up 30 percent. The GLAAD report also found that overall racial diversity is up from last year, with 36 percent of series regulars on broadcast counted as people of color.

Of the 895 series regular characters believed to appear on broadcast primetime scripted programming in the 2016-2017 season, GLAAD found that only 43 were identified as LGBTQ. This breaks down to 4.3 percent of all characters on TV. And, when you see that the number of transgender characters on TV has "more than doubled" over the past year, you can't help but feel good. That is, until you find out that last year, there were only seven trans characters on TV — a whopping zero on broadcast — and now there's 16. The bar was raised, but only a wee bit.

There's also a story the numbers will never completely tell, and it's the real measure of success when it comes to LGBTQ representation. The real triumph will be when there is a clear increase in the number of LGBTQ characters that actually represent the lives of real LGBTQ people. TV has only succeeded when LGBTQ characters are series regulars, and, even better, the leads of their shows. When these character are not simply used as props to further someone else's story — specifically a white cisgender one. When these characters don't do more harm than good by playing into stereotypes.

For example, GLAAD's report found in 2016 lesbian representation fell dramatically from 23 characters in 2015 to 12 in 2016. Worse, queer women on television also succumbed to the "bury your gays" trend of last year. "Over 25 lesbian and bisexual female-identifying characters have died on scripted broadcast and cable television and streaming series since the beginning of 2016," the report found. Twelve of those deaths were on broadcast TV alone. Last year, GLAAD asked the broadcast networks to work towards to developing better lesbian and bisexual characters — and to stop killing them off. They stressed that killing of these characters "sends a dangerous message to audiences that LGBTQ people are secondary and disposable," because they are far more than words on a page or a face on a screen.

Yes, being seen is one step towards fixing the problem of LGBTQ representation on TV, but having stories that matter is the real solution. It's why GLAAD president and CEO, Sarah Kate Ellis, is urging everyone to look beyond the highlights of this report.

“While it is heartening to see progress being made in LGBTQ representation on television, it’s important to remember that numbers are only part of the story, and we must continue the push for more diverse and intricate portrayals of the LGBTQ community. GLAAD will continue to work with Hollywood to tell nuanced LGBTQ stories that accelerate acceptance – and hold the networks, streaming services, and content creators accountable for the images and storylines they present.”

Hollywood still needs to realize that these characters matter for reasons far beyond this study, that lesbian, gay, bisexual, transgender or queer characters shouldn't be written to fill some sort of quota or to fudge the numbers and make a few people at the top feel like they did their job. These characters are more than numbers; they represent people who need more characters who are just like them. They give hope to those people by showing that their stories matter and are worth telling — and, more importantly, that their lives matter. No matter how many LGBTQ characters we can count on TV, it's their stories that matter.