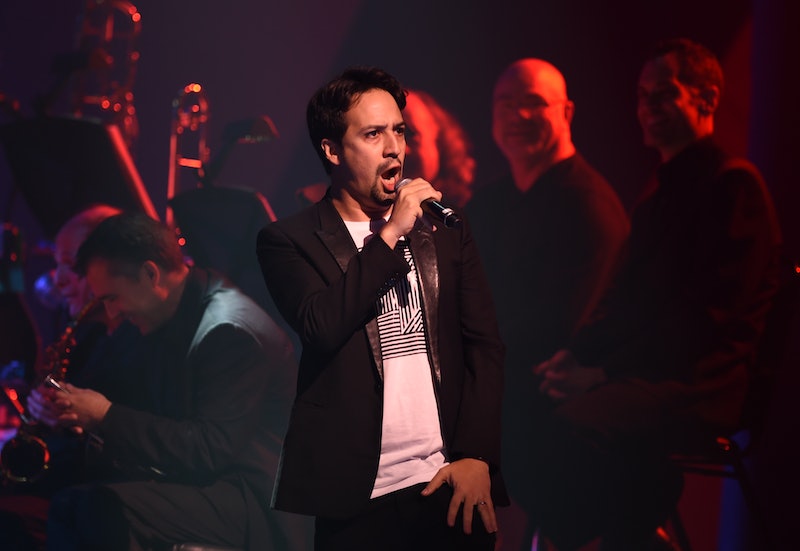 In news that is going to make Hamilton fans start doing a special little happy dance, Lin-Manuel Miranda announced via Twitter that The Hamilton Mixtape is finally finished and will available to pre-order on Friday. If you need to sit down and take a deep breath upon reading this news, please go ahead. While any release from Miranda is extremely exciting, the sheer impressive list of artists involved in his latest venture is almost unbelievable. The Hamilton Mixtape track list features the most perfect song-to-artist match ups you could ever imagine, from John Legend to Kelly Clarkson, and some of the pairings are as great as you'd imagine.

Back in March 2016, producer Questlove told Vanity Fair about The Hamilton Mixtape, and said, "Half the songs are cover versions of songs in the show, and the others are interpolations... Hamilton is the balance that hip-hop needed." Miranda reiterated Questlove's thoughts, speaking of the diverse and exciting list of musicians collaborating on the album: "I’m not going to be on it because for me the goal is to keep this inspired by the original."

As fans will notice on the track list shared on Thursday, Miranda seems to have changed his mind about appearing on the album, and is listed on two tracks. Here are just some of the song-to-artist match ups that sound super exciting.

1. John Legend On "History Has Its Eyes On You"

I can't think of a more perfect person to sing such an emotive song. John Legend is going to kill "History Has Its Eyes On You", and I can already sense that this track is going to be played on repeat by just about everybody who hears it.

2. Alicia Keys On "That Would Be Enough"

Alicia Keys is an incredible choice for "That Would Be Enough". Her crisp vocals are going to slay on The Hamilton Mixtape, especially on a song that expresses so many raw and complicated emotions about love and loss.

Spektor is an exciting choice for "Dear Theodosia", especially since it means shaking up the gender roles of the song. As piano-led artists, Folds and Spektor are like the power couple we never knew we needed, and together they're going to sound crazy good.

4. Kelly Clarkson On "It's Quiet Uptown"

Clarkson has an outstanding vocal which is perfect for a huge orchestral number like "It's Quiet Uptown". She'll bring a really modern twist to the more classical musical sounding track, and that'll be exciting to hear.

Sia's distinct voice will really pop on "Satisfied", and, since her collaborators are none other than Queen Latifah and Miguel, this track is going to be on fire. Plus, just picture Sia, with wig, in a stage performance of the Hamilton track — now that I want to see.

6. The Roots On "Who Lives, Who Dies, Who Tells Your Story" (Featuring Common & Ingrid Michaelson!)

The Roots. Ingrid Michaelson. Common. The combination of artists performing "Who Lives, Who Dies, Who Tells Your Story" is completely amazing. Their totally varied musical styles are a great fit for one of the show's most important tracks, and I can't wait to see how their partnership works out.

It's time to put The Hamilton Mixtape on your Christmas list immediately, especially since Amazon UK has its release listed as Dec. 2, 2016.