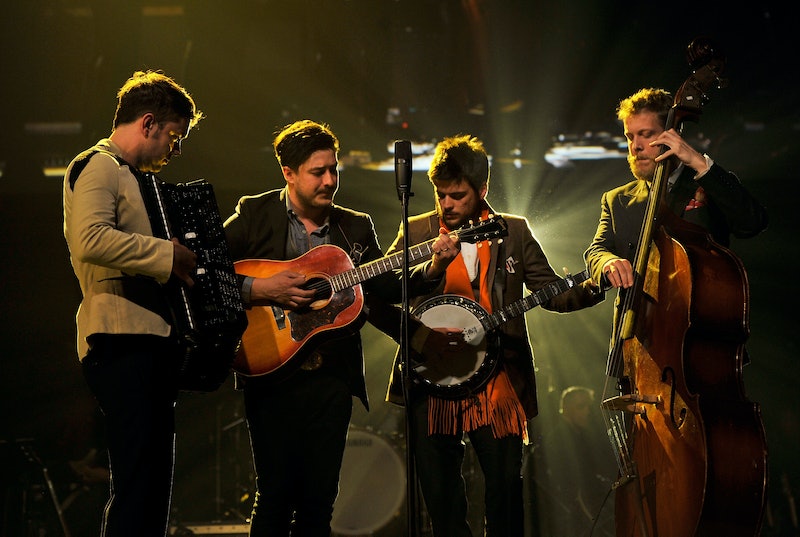 The banjo is dead, you guys...and so is the band that brought that instrument into ubiquitous exhaustion last year. Winston Marshall from Mumford & Sons apparently hates the banjo, and he's completely retiring it...alongside with Mumford & Sons. You hear that, world? You might never hear "I Will Wait" again!

You may recall that the band said they'd be taking off for awhile back in September, and you likely thought something along the lines of, "cool. I need a break from the banjo. More specifically, I need a break from Mumford & Sons' banjo playing." You were not alone in your thoughts! The band's banjo player, Marshall, agreed! At the Mistaken for Strangers after party, he said, "I wish I had something to say about Mumford & Sons. It was a good time." It sounds like a pre break-up words. So is it...over? "It's over [...] Yeah, we had a good time, though, you know."

Aw, we did, too, and so did all of the boys in America who feigned "deep" as their OkCupid personalities in fall 2012 and winter 2013, citing the band as their absolute favorite.

Still, no matter what happens next artistically for Marshall, don't expect a banjo. It's so last year, ya'll. In fact, when someone asked Marshall whether or not his former band "killed" the banjo, he said:

I think 'killed' is an understatement. We murdered it. We let it, yeah — fuck the banjo. I fucking hate the banjo.

I guess we've got to say "R.I.P," then. You know a great way to rest peacefully? Listening to a song that sounds like this...